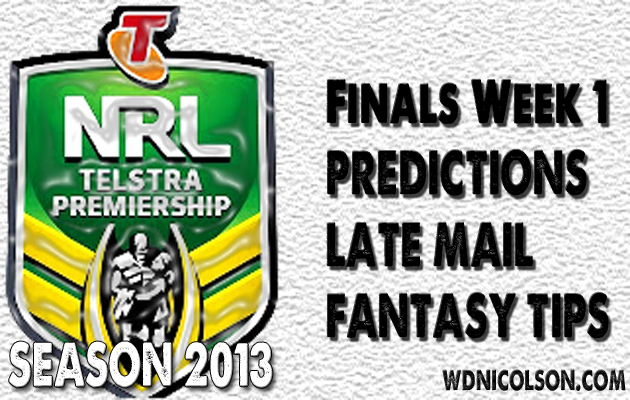 Well the regular season is all over and the real thing begins... for all you Tipsters and Fantasy Nerds the real fun is over and the hit and giggle begins... that sweet sweet smell you smell is not Old Spice, rather Finals Footy!

The stock standard and at times underwhelming regular season is over, and the real thing has now begun.

If you want to tell us who you are picking in the Finals - just comment on the article below or post your picks on our NRL Podcast Facebook Page but if you want to play NRL Dream Team Finals - click here to join a league featuring some old NRL DreamTeamers. We'd offer a Supercoach league but they aren't putting up any prizes so what's the point really? 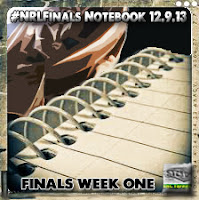 You can track Finals Week 1 Votes via #NRLTweetPlayerofFinals and Voting Allocation is below (3 Voters per game in first three weeks, then 5 Voters for the Grand Final - all using 4-2-1 Votes) as is the rest of what you need for your weekend of Finals Footy. 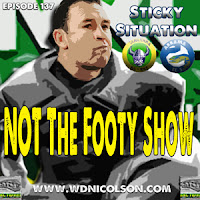 Grab the latest Podcast of NOT The Footy Show:

Jake and Waz take 20 minutes to discuss everything that comes out of Ricky Stuart's decision to dump Parra for the Raiders.

Latest of Late Mail and Qualifying Finals Tips below!

For our analysis of Tuesday team selections for Finals Week 1 - click here.

@NRLTweet's PREDICTION:
Two meetings this year between these teams... Two convincing Melbourne victories.
You may want to make a case that Souths have a bigger forward pack and that Melbourne won't be able to hold them but I have to inform you that the same went for the last two times these teams played during the regular season and Melbourne did it almost easy...
South Sydney got back into a winning position against the Roosters in their fight for the Minor Premeirship and choked... Reynolds and Sutton went missing and I just can't get Keary's awful last two plays in an attacking set out of my head... not that Keary is a bad kid, but where were Reynolds and Sutton screaming for the ball???
Melbourne haven't had a wonderful last two weeks but they are the defending premiers for a reason... I expect them to show why on Friday night. Just like they did when these two teams met in a semi final last year.

All signs point to Melbourne winning, South Sydney may need the tune-up against their next opponent in 6 or 7 days time to get back up to speed for a genuine title push. It can still happen but I don't think it starts Friday night.
STORM by 10 points | MEL 22 def. SOU 12

LATEST OF LATE MAIL:
Rabbitohs - Will Maguire pull a late change or two on his bench? We've seen it before... Lowe is one name that may come in.
Storm - The Storm may give Finch the week off but his replacement Widdop could end the veteran's career if he plays well this weekend and the Storm get a week off. Can still see Kenny Bromwich missing out to someone else.
PRE-GAME UPDATE: Widdop is in for Finch at five-eighth for Melbourne and Kenny Bromwich holds his spot on the bench. Souths drop Tom Burgess and Luke Keary, bringing in Luke Burgess at prop and Dave Tyrrell into the second row. McQueen and Asotasi benched, Lima at lock, Sam Burgess at prop.

@NRLTweet's PREDICTION:
My doubts over the ability of Matt Scott to play with a broken finger and make an impact is the main reason I just can't pick the Cowboys here.
I want to pick them, because they'll show more imagination with the footy than Cronulla will over the course of any kind of playoff run (well at least that's the hope) and I think they would present the loser of the Roosters and Sea Eagles with a worrying matchup.
That being said - the Sharks may want to realise that this could be their last great run at a title with Paul Gallen relatively fit... the warrior has looked good the last few rounds but you just never know how your body will be in another 12 months... this game will be won by the Sharks if Carney takes control behind his fantastic pack of forwards... it will be lost by the Cowboys because they can't stop Gallen and Fifita from getting away offloads and allowing Carney to have time with the ball - if he gets that he'll carve the Cowboys up.

Sharks win this one, but the lack of strike power in their centres ends their season a week later. Cowboys rue another year of no title with Thurston in his prime... unless Scott plays and plays the house down.
SHARKS by 7 points | CRO 25 def. NQL 18

LATEST OF LATE MAIL:
Sharks - Fifita and Carney are certainties according to the Sharks, while Gibbs could get a run on the bench with Tagataese or Tupou missing out.
Cowboys - Matt Scott may have to defy doctor's orders to play with his broken finger - we should know more tomorrow. Ashton Sims would come in for him. Thurston is a certainty.

PRE-GAME UPDATE: Both teams are 1-17. Gibbs and Ross miss out for Sharks, Ashton Sims for Cowboys.

@NRLTweet's PREDICTION:
I don't expect Brett Stewart to play... and for that reason - I'm sticking with the Roosters.
Not only because they get O'Donnell and Aubusson back (though losing JWH hurts), but because they just dusted the Rabbitohs without them.
Manly are a good team, maybe a bit better than that - but without Brett Stewart they are not better than the Roosters.
Like most Roosters' games - this comes down to how well the Roosters defend and as importantly - how well their bench keeps their thrust going once they enter the action.
Manly's gradually looking stronger on the bench but will miss Buhrer being able to play as a tight forward when Glenn Stewart needs a break from defence.

Roosters get the cash, Manly get a date with Cronulla a week later to prove they are still premiership material... and for their sake you better hope Brett Stewart's hamstring is okay.
ROOSTERS by 4 points | SYD 20 def. MAN 16

LATEST OF LATE MAIL:
Roosters - O'Donnell probably starts, but Napa is a smokey here... If Napa plays then either Aubusson isn't right or Liu or Kennedy miss out.
Sea Eagles - The fitness of Brett Stewart remains a big worry for Manly... but Watmough will play. Buhrer is unlikely.

PRE-GAME UPDATE: Brett Stewart is OUT and Hiku will play fullback, Buhrer also comes in for Gower. Roosters leave Liu out, start O'Donnell and Guerra, with Kennedy and Aubusson on the bench.

@NRLTweet's PREDICTION:
If Des Hasler doesn't change up how the Bulldogs attack... which he hasn't all season, then Mullen's kicking game is going to get the Knights over the line on Sunday.
The Newcastle playmaker is in great form and the Bulldogs will play slow deliberate football through their forwards and rely on Barba doing something... but he has only played 60 minutes (he looked okay though) in the last month and a bit and the Dogs just don't get enough creativity from Ennis or Hodkinson (Reynolds is a roll of the dice week to week) to worry a Newcastle team that I just can't see not turning up to ANZ Stadium with their game-faces on.
Wayne Bennett will know this is a golden opportunity to make his first genuine run in September as Newcastle coach and although they are missing Gidley and Snowden - he has plenty of veterans in place to keep his talented brigade focused.

Bulldogs don't impress me and haven't since late last year, Knights to take control early and not let the Dogs back in it, setting up a clash with the Rabbitohs next week.
KNIGHTS by 7 points | NEW 19 def. CBY 12

LATEST OF LATE MAIL:
Bulldogs - The Dogs are planning to bring in Eastwood and Pritchard for Browne and Lafai, with Barba starting at fullback. But there is talk that all three are not certainties with injury.
Knights - Craig Gower has been cleared to train... so he may replace Hilder on the bench.
PRE-GAME UPDATE: Knights will likely be 1-17, but Dogs are rumoured to have dropped Inu to start Barba and retain Lafai. Eastwood likely in on the bench, no confirmation on Pritchard yet.

What are your tips for the Qualifying Finals?