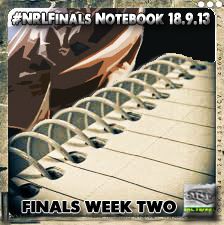 [Q] DAILY QUESTION: How many current NRL players can you name with the initials J and T? As in, Johnathan Thurston... remember if you cheat, what's the point?

Watch the Semi Final unfold here
[A] DAILY QUESTION ANSWER... Off the top of our heads we got 5 - J Thurston, J Tamou, J Taufua, J Thompson, J Taumalolo... a quick check of the RLP gives us J Tedesco and J Trbojevic as the two we missed. Dirty we missed Tedesco, understandably we missed Trbojevic given he didn't debut til Round 26.