After months of hard work, the 4th Edition of the NSC Rugby League Almanac is now available to purchase here.

For just $10.00 AUD the 49 Page Rugby League Guide will give you the most in depth analysis of the 2012 NRL Season on the market and has two special features that will stir up plenty of debate over the off-season.

The long awaited NRL Top 200 is revealed - answering the question: If you could choose any player first overall to help you win a premiership in 2012 - who would it be?

And the NSC Honour Roll returns after a 4 year hiatus with 15 new Inductees to the Exclusive List of Rugby League Greats to have played the game since 1989.

Plus a whole lot more. 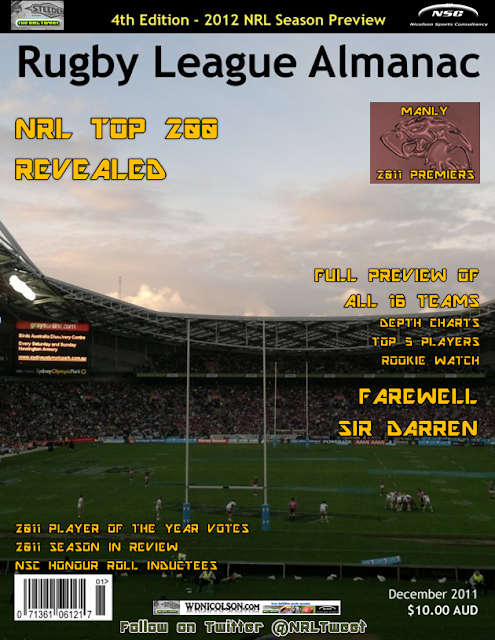 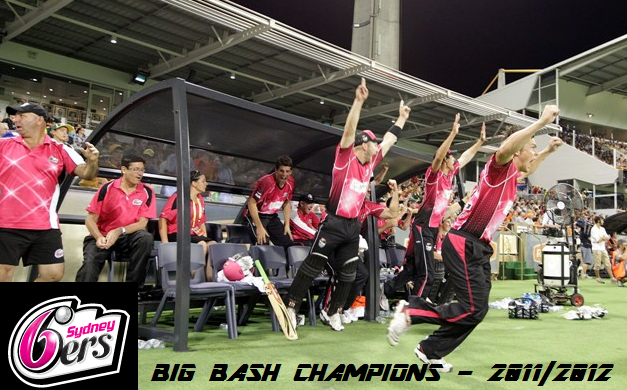 Read about the win here on the Sydney Sixers website
They defeated the Perth Scorchers by 7 wickets on Saturday January 28th at the WACA.
Full Scorecard here

Well after months of waiting and a complete retooling of the Australian Summer of Cricket to accommodate it - the KFC Big Bash is here.

The Brisbane Heat will visit the SCG on Friday Night to take on the Sydney Sixers in the season opener for a revamped competition that will run from December 16 through to January 28.

Twenty20 Cricket is being pushed as the 'thing to watch' this summer by Cricket Australia - which is interesting given the Indian Cricket Team's visit is quite a tasty proposition - and they have scrapped all domestic cricket (One Day and First Class) throughout the Big Bash.

There are eight new teams and a host of stars (although no Indian players due to the BCCI not being interested in pumping up the tyres of a IPL rival) on show as the 'hit and giggle' game gets a big leg up over the holidays.

While the advertising campaign has fallen flat to an extent - seriously the whole 'rivalry' angle is currently a moot point given NONE of the teams have actually played each other yet and that ad is very ordinary - cricket always relies on the emergence of players for its marketing and there are enough stars and young guns on each roster to make a concentrated effort at appealing to the fans.

But as always - the quality of the cricket will be important. Australia have always been a little pessimistic as to the value of the T20 game and if the first two Tests against India are crackers then the Big Bash might be hard pressed to wrest back the fan base to the final games of the regular season.

Another negative when it comes to the scheduling is the fact the two semi finals and the final will be played on the same days as the 4th Test against India in Adelaide... which suggests that the Adelaide Strikers may not be able to have a home final should they qualify.

Because the only option is for the 4th Test to finish at 6pm and then everyone file out of the ground only to come back in for a 7pm Big Bash Final at the same ground.

After careful consideration and running the scouting report over each team, www.wdnicolson.com is declaring the Melbourne Stars as the inaugural Big Bash Champions for 2011/2012.

The final standings will be.

NOTE: Injury news through Friday December 16 sees Kieron Pollard ruled out of the Big Bash for the Adelaide Strikers. He's a massive loss but we'll stick by our predictions.

Check out the Full Big Bash Preview below with Fantasy Tips, Rosters and more Scouting Reports on your favourite players.

If you have entered a Fox Sports Fantasy Cricket Team for the Big Bash - join the Fox Sports League to take on Mark Waugh and Damien Fleming. Code: 1610-2326
If you are playing the BigBash.com.au League - better prizes but less interesting setup - join here http://fantasy.bigbash.com.au/


WHO WINS THE KFC T20 BIG BASH THIS SUMMER?