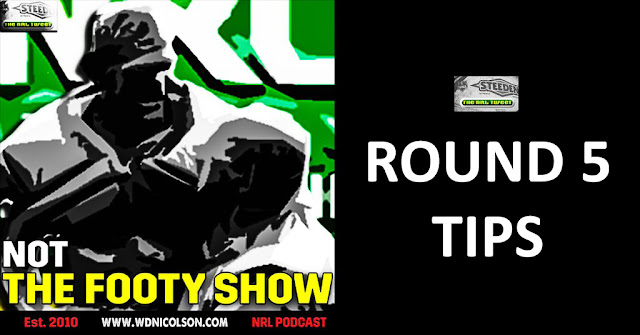 Last Week: 5/8
Missed on Titans, Manly and Tigers... angry at missing Eels as we had them all week and changed on Friday, but Raiders and Roosters probably should've won their games so we can't complain with 5. Solid so far... but not spectacular sorry.

Round 5 Tipping Skinny: Storm and Cowboys should win... the rest of the games aren't easy though! Truly wavering on Sharks, Roosters (but hey the Warriors have only 1 win so they aren't on fire), Panthers and Raiders but hardly convinced on Souths and Brisbane. Good luck kids - if we change our mind we'll update. 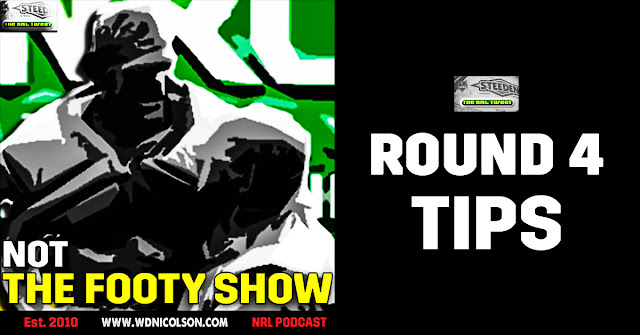 Last Week: 4/8
Missed on Dogs, Broncos, Souths and Cronulla and got lucky with Canberra giving us half a point - but given the main tipping comps give you a full point - for consistency we'll give it as 'right'. Obviously our weakest week so far but still a 4/8 week early isn't soul destroying.

Round 4 Tipping Skinny: Toughest Round of the year so far - so if we end up near 6/8 - we will take it with both hands. We're probably over-rating the Bulldogs but we're also loathe to over-rate the Bunnies without Sam Burgess, going Brisbane to bounce back and beat the Cowboys, Raiders to just beat the Titans, Roosters to stun Manly, Dragons to somehow outlast the Panthers, Warriors to crush the Knights, Tigers to somewhat shock Parra and Cronulla to end Melbourne's winning streak. But hey - we've been wrong before!

Look who is 2-0 in the Blue and Gold... #NRLBulldogsEels #NRL

Yep, somehow - the Eels have rebounded from looking punchless in Round 1 to beat the Cowboys and Bulldogs in successive weeks... and one Kieran Foran has been there for both victories - on sort of one leg.

In last night's 20-6 win at ANZ Stadium he ran the ball with more confidence and the Dogs handed him metres down Parramatta's right edge as they waited and waited and waited for him to pass... then Corey Norman called the ball to the left on the back of Foran's run and Semi Radradra terrorised the Chase Stanley-Sam Perrett combination thereafter.

While both of Semi's tries came up the middle - Parra always looked threatening going left and though Foran plays on the right - his presence on the field is clearly beyond the stats sheet.

So are Parramatta playoff-bound?

Course not, in that you can't say that any team starting 2-1 is in a 24 game season, but knocking off the defending Premiers and then a team that had looked pretty good starting 2-0 in the Dogs - is a pretty good turnaround from the Round 1 origami impression against Brisbane.

Foran may be playing in the #7 but he's just a fantastic five-eighth. And though Norman is playing in the #6 - he's doing far more of the halfback duties than his partner.

It's a good match of talents and the Eels may not be as bad as I thought they could be entering the season (and after Round 1) but let's not pop the champagne just yet Parra fans.

As for the Bulldogs... well they still rely far too heavily on momentum going down the field off the back of their ball-playing props to score points. In fact they had enough chances inside the 20m zone last night to win the game but Moses Mbye and Josh Reynolds didn't seize the moment at any stage... the fact Josh Morris and Curtis Rona (by far Canterbury's most dangerous attacking edge) saw practically no ball in that zone or in the second half at all - shows how much Mbye and Reynolds rely on the Graham-Kasiano-Tolman trio to create room/chances out wide.

They simply didn't produce what you need out of your halves inside the attacking 20m zone - especially when you get quite a few chances.

There was one play in particular in the first half that stood out - Tony Williams ran over Kieran Foran and powered down-field. Mbye was standing on his left next to the dummy half with Parra's right edge shot to bits and Morris/Rona in great position down the short side next to him - but there he was, standing still and pointing to the right... wanting someone else to make something happen.

Yes I realise that's an isolated incident and heck, of course it ain't easy out there vs where I was sitting in the stands at the end of the field - but for all the accolades the young man has received in two weeks - if the Dogs score off that play it's 6-all late in the first half...

And I haven't even mentioned what happened in the 2nd Half...

Sure - Mbye is a runner at this stage of his career but he's got two weapons outside Williams on his side of the field that he massively underused last night and the Dogs barely looked like scoring as a result.

Over to you kid.

And finally on the 2-0 Kieran Foran... they've got the Tigers on Easter Monday at ANZ with a long turnaround so Parra going 3-1 after the first month isn't a pipe dream after all! 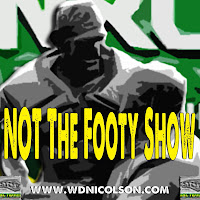 Last Week: 6/8
Whiffed on Cowboys and Manly. But you don't turn down an 11/14 start to a tipping season!

Round 3 Tipping Skinny: Struggling with Panthers-Broncos, Titans-Tigers, Warriors-Storm and Manly-Sharks... so going with the favourite in all but the Titans case... and I know the Tigers are 2-0 but I think the Titans will match up well with them on the Gold Coast. Plus - never underestimate the value of a good tipping start - so don't throw away tips based on too many hunches early. (Memo to self: change tip to Tigers)

The NRL Tweet's Tips for Round 2 2016
Bulldogs over Panthers (late change... sorry if you've made your picks already)
Broncos over Warriors
Raiders over Roosters
Souths over Knights
Cowboys over Eels
Sharks over Dragons
Storm over Titans
Manly over Tigers

Last Week: 5/8
Whiffed on Manly, Warriors and Roosters. But happy enough with that start.

Tipping Skinny: Toss a coin Thursday night, Saturday arvo and Sunday arvo (or go home teams like me). Expect Broncos, Souths, Cowboys and Storm to take care of business. But ask a clairvoyant about Monday night...

Just try and take it off him  #NRL is back tmw!
Posted by NRL - National Rugby League on Wednesday, March 2, 2016

Tipping Skinny: No big write-ups each week again in 2016 sorry but let's be honest in Round 1 it's always a stretch to say you are confident about anything.

Real tough games to pick are Manly-Dogs, Raiders-Panthers and Titans-Knights. But that's not to say the rest of the games are fait accompli at all.

The aim is once again to hit the 65% mark - so we need a 5% tipping improvement this year... but that'll win your comp with your mates 9/10 so let's see what we can deliver.

We've also done some research into the www.wdnicolson.com archives and you can now see our tipping % for each of the past 6 years... yep we've been around a while.

Good luck everyone who still pays attention to these tips - especially you Jim F in the Philippines. Let's win that Seniors Comp this year mate!