As released on Tuesday August 30 - Each NRL Team for Round 26 is listed below.
All Teams have been analysed in comparison to the side they last put on the field and the relative impact of new players or those returning from injury.

NEW: Gidley (c), McManus, Likiliki, MacDougall, Uate, Stig, Mullen, Tuimavave, De Gois, Kaufusi, Houston, Costigan, Edwards. Bench: Hilder, Ciraldo, Fa'aoso, Taufua, Tetevano.
[Team Changes - The Knights are without Keith Lulia this week after he suffered a knee injury against the Bulldogs. Siuatonga Likiliki keeps his spot in the centres with Adam MacDougall returning from a knee injury. Peter Mata'utia goes back to NSW Cup, with Kurt Gidley back at fullback. Matt Hilder is named to return from a serious head gash on the bench, while Mark Taufua joins an extended bench and Marvin Karawana drops off it. ]

STI: Boyd, Morris, Gasnier, Cooper, Nightingale, Soward, Hornby (c), Hunt, Young, Weyman, Scott, Creagh, Prior. Bench: Green, Fien, Cuthbertson, Merrin, Rein.
[Team Changes - The Dragons have added Adam Cuthbertson to the bench for the second straight week despite not playing him against the Warriors. Kyle Stanley is out of the squad and will play Toyota Cup again. Dean Young starts at hooker with Mitch Rein and Nathan Fien on an extended bench. ]

CRO: Gordon, Mills, Collis, Best, Williams, Kelly, Graham, Snowden, Morris, Douglas, Smith, Tupou, Gallen (c). Bench: Tagataese, Tautai, Aiton, Cordoba, Pomeroy.
[Team Changes - The Sharks have named Dean Collis at centre again despite him failing to play there against the Cowboys. Ben Pomeroy who replaced Collis has gone back to the bench. Taulima Tautai is the new face on the bench, while John Mannah is omitted. ]

WTG: Moltzen, Ryan, Ayshford, Utai, Tuqiri, Marshall, Lui, Gibbs, Farah (c), Galloway, Fulton, Ellis, Heighington. Bench: Brown, Groat, Woods, Murdoch-Masila.
[Team Changes - The Tigers hope to get Bryce Gibbs back from a lacerated knee for the final game of the regular season but Todd Payten is probably another week away with a knee injury. Lote Tuqiri got knees in the back against the Titans but should be sweet and Matt Utai only suffered from cramp. Ben Murdoch-Masila holds his spot on the bench ahead of Mark Flanagan after both were late inclusions against the Titans. ]
TITANS v EELS
@ Skilled Saturday Night

GLD: Rankin, Michaels, Tonga, Toopi, Mead, Zillman, Campbell, Bailey (c), Srama, White, Laffranchi, Minichiello, Bird. Bench: Lawrence, Matthews, Thompson, O'Dwyer.
[Team Changes - The Titans cannot bring anyone new into their squad as they have been decimated with injuries. Clinton Toopi is named at centre again but he didn't last the whole match with the Tigers due to concussion, while Greg Bird's hand is badly broken. There are no changes to the 17 - but that's not necessarily by choice. ]

BRI: Hoffman, Beale, Reed, Te'o, Yow Yeh, Lockyer (c), Wallace, McGuire, McCullough, Anderson, Glenn, Thaiday, Parker. Bench: Gillett, Hunt, Hannant, Hala.
[Team Changes - The Broncos will not play Justin Hodges again until the first week of the Finals due to a hamstring injury and as a result Ben Te'o holds his centre spot, and David Hala remains on the bench. So basically - the Broncos are unchanged. ]

SYD: Minichiello, Perrett, J Carney, Leilua, Graham, Anasta (c), Pearce, Ryles, Friend, Tasi, Guerra, Cordner, Nu'uausala. Bench: Mitchell, Masoe, Takairangi, Arona, Waerea-Hargreaves.
[Team Changes - The Roosters have named Sam Perrett to return from an ankle injury and Jared Waerea-Hargreaves to return from suspension, while Shaun Kenny-Dowall (Groin) is the only omission from the team that beat the Eels in golden point. Frank-Paul Nu'uausala is named at lock, while Waerea-Hargreaves comes back on the bench. Joseph Leilua replaces Kenny-Dowall in the centres. ]

MEL: Slater, Duffie, Nielsen, Champion, Quinn, Widdop, Cronk, Bromwich, Smith (c), Norrie, Proctor, Hinchcliffe, Lowrie. Bench: Kostjasyn, Vea, Woolnough, Lowe.
[Team Changes - The Storm have accepted bans for Sika Manu and Sisa Waqa for their involvement in the Donnybrook Oval incident, and Adam Blair could have played his last game for the club as he is facing 2 sets of suspensions. Cooper Cronk and Jesse Bromwich return from injury while, Atelea Vea is the new face on the bench. Maurice Blair may not be risked until the semi finals. ]
ROUND 26 BYES - NONE All done for 2011.
]-[ ]-[ ]-[

Full Round NRL Preview available each Wednesday/Thursday on www.wdnicolson.com with the Latest Mail, NOT The Footy Show Panel Tips, Injury Updates and Key Stats.
By W D Nicolson

THE NRL TWEET's ROUND 25 REVIEW

Here on www.wdnicolson.com we've got all the Game Results, Match Reports, Game Highlights, Game Stats, Injury News, Press Conferences and NRL Tweet Player of the Year Award Votes in the one place. This Round Review also integrates our NRL Injured List - which if you haven't bookmarked by now - I suggest you do so.
Player of the Year Votes are added as awarded by our panel - from Round 25 all votes go silent, all will be revealed on NOT The Footy Show's @NRLTweet Player of the Year Awards Monday 5th September at 7:30pm on ustream.
Fantasy League Leaderboard is updated Tuesday.

THE NRL TWEET's ROUND 25 REVIEW

Pick your team from the positional tables and watch them score Tries for you throughout the Finals Series. There are triple points on offer for Grand Final Points and the winner walks away with a specially created NOT The Footy Show 'Old School Team Logo' T-Shirt. Cut-off is 7:30pm before the 1st Qualifying Final on September 9.
ROUND 25 RESULTS
24/08 Odds are courtesy of Sportingbet Australia 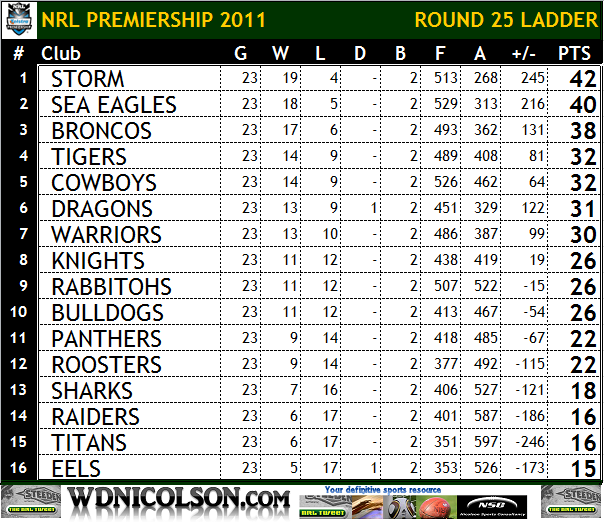 NRL TWEET PLAYER OF THE YEAR VOTES
The Leaderboard went silent as of Round 18 and the votes for Round 25 and 26 will also go silent ahead of the @NRLTweet Player of the Year Awards Show on Monday 5th September at 7:30pm.

7:45pm (Local) 26 August @ Brookvale Oval, Brookvale.
NRLTweet Game Summary: Manly are impressive, Melbourne are out-gunned, but Glenn Stewart and Adam Blair losing the plot is the big story out of Manly's 18-4 win.
Injuries: David Williams (Neck), Brett Stewart (Knee), Jesse Bromwich (Elbow - late withdrawal)
GAME STATS
2011 @NRLTweet Player of the Year Votes
Judge: Maria Tsialis
All Votes for Round 25 and 26 are hidden - all will be revealed on the @NRLTweet Player of the Year Awards Show on Monday 5th September at 7:30pm.

Judge: Matthew Duncan
All Votes for Round 25 and 26 are hidden - all will be revealed on the @NRLTweet Player of the Year Awards Show on Monday 5th September at 7:30pm.
Want more analysis on this game? Listen to NOT The Footy Show where every game is reviewed.
GAME HIGHLIGHTS