Round 13 NRL Teams
As released on Tuesday May 31 - Each NRL Team for Round 13 is listed below.
All Teams have been analysed in comparison to the side they last put on the field.

ROUND 13 TIPPING PREVIEW OUT WEDNESDAY

PAR: Hayne, Burt, Morgan, Loko, Atkins, McGuire, Robson, Mannah, Keating, MoiMoi, Hindmarsh (c), Lasalo, Smith. Bench: Shackleton, Allgood, Webb, Horo.
[Team Changes - The Eels bring back Jacob Loko after giving him a break against the Knights for veteran Chris Walker who is demoted to the NSW Cup. Ryan Morgan keeps his spot in the centres after being a late replacement and Anthony Mitchell makes way for Carl Webb on the bench. ]

STI: Boyd, Tagive, Gasnier, Cooper, Nightingale, Soward, Hornby (c), Hunt, Young, Weyman, Scott, Creagh, Prior. Bench: Green, Fien, Cuthbertson, Merrin, Bosden, Rein.
[Team Changes - The Dragons lost Brett Morris at halftime to a hammy injury against the Tigers and despite being named - Matt Cooper - is long odds to play after suffering eye socket and hand injuries during the game. Matt Prior or Beau Scott would move to the centres if Cooper is out. Peni Tagive comes in on the wing for Morris as youngster Kyle Stanley has a hamstring injury. Dean Young will start at hooker and Mitch Rein is likely to miss out once the bench is cut down, as will Jack Bosden. ]

CRO: Gordon, M Wright, Pomeroy, Best, Mills, Graham, Porter, Snowden, Morris, Tautai, Bukuya, Tupou, Gallen (c). Bench: Vave, Mannah, Flanagan, B Wright, Frizell.
[Team Changes - The ironman streak of Luke Douglas is over at 133 due to a knee injury and Taulima Tautai has been named at prop in his place. Still no Nathan Gardner or Jeremy Smith for the Sharks. Tyson Frizell has once again been added to the bench with Josh Cordoba suffering a hamstring injury last weekend. ] 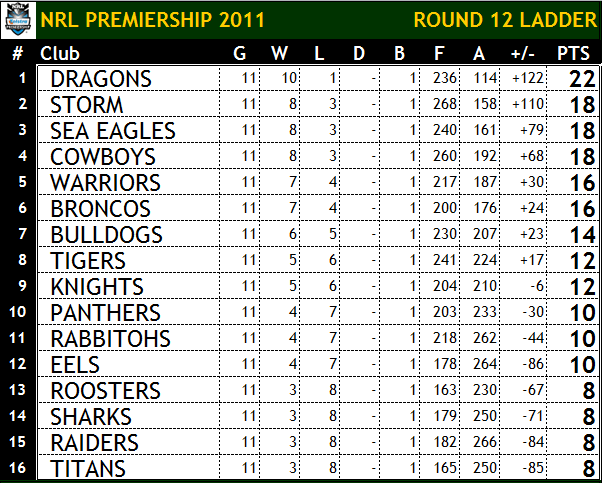 THE NRL TWEET's ROUND 12 REVIEW
Here on www.wdnicolson.com we've got all the Game Results, Match Reports, Game Highlights, Game Stats, Injury News and NRL Tweet Player of the Year Award Votes in the one place.
This Round Review also integrates our NRL Injured List - which if you haven't bookmarked by now - I suggest you do so.
Player of the Year Votes are added as awarded by our panel - all votes are usually up to date by Tuesday.

7:05pm (Local) 27 May @ Suncorp Stadium, Brisbane.
NRLTweet Game Summary: What happened at half-time at Suncorp? Brisbane lead Manly 10-4 at the break but are run down deluxe. Manly 34-10 victors by full-time.
Injuries: Brent Kite (Back), Jason King (Ankle), George Rose (Calf), Ben Te'o (Arm)
2011 @NRLTweet Player of the Year Votes
Judge: Matthew Vickers
4 - Kieran Foran, MAN
Outstanding display.  It really struck home home good he is when you consider he is the senior halves partner in only his second full season, after playing alongside a rookie last year as well.  His banana kick for Brett Stewart was reminiscent of Andrew Johns.
2 - Brett Stewart, MAN
Probably deserves the 3 points for THAT pass alone.  His performance in this game typified what he means to the Manly side and why they need him on the field. Imagine what he will be able to do with some match fitness.
1 - Daly Cherry-Evans, MAN
Really coming in to his own in first grade. Great support play.
Judge: Matthew Duncan
4 - Anthony Watmough, MAN
Had a barnstorming game (Like he always seems to do against the Broncos) One the forward battle for Manly which gave Foran & DCE plenty of room th weave their magic.
2 - Kieran Foran, MAN
Is Class with a Capital C - Very controlled 1st half and then blew the Broncos away in the 2nd.
1 - Daly Cherry-Evans, MAN
The QLD halfback stocks look in good hands for a while yet. The Broncos sent a lot of defence his way and he didn't back away from the challenge. Support play was good too.
GAME HIGHLIGHTS
|-| |-| |-|

Check out the Round 12 Tipping Preview below...

THE NRL TWEET's ROUND 12 PREVIEW

Welcome to Season 2011... after an off-season that often feels longer (or shorter - depends if you like cricket or not) than it is - the footy is back. Here on www.wdnicolson.com we've got all the Tuesday Team News, Wednesday Previews and Friday Late Mail (sourced from SMH and beyond) that will keep your Tipping and Fantasy habit well fed. This preview integrates our NRL Injured List - which if you haven't bookmarked by now - I suggest you do so.

Manly are going very nicely right now and getting Brett Stewart back in a team that is hardly touched by the Origin backup factor makes them hard to tip against. Brisbane will likely rest Lockyer and Thaiday so I'll pick Manly.
Tipping + Fantasy Late Mail...
SMH + Other Late Mail 27/05 - Hannant should play, Lockyer and Thaiday will not. Dane Carlaw will miss out. Des Hasler says Jason King may in fact play, as will Brett Stewart.
The NRL Tweet's Tip...