Sharks will never get a better chance… 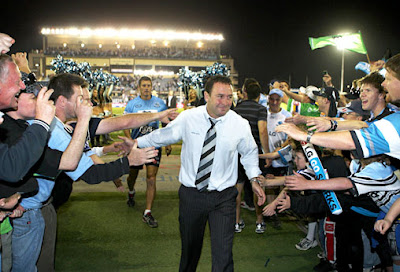 When Greg Inglis dived over for the match winning try in the final seconds against Brisbane on Saturday night, the Storm’s Preliminary Final opponents could not have been happier with the result.
For one the Cronulla-Sutherland players had just watched the Broncos bash the Storm’s pack from pillar to post for 80 minutes just a week after the Warriors did the same thing, plus they’d witnessed the reigning premiers fail to hit their stride at any stage for the second consecutive finals match and thirdly, knew that Melbourne skipper Cameron Smith was bound to be rubbed out for the rest of the 2008 season thanks to yet another pathetic and gutless attack on the head of an opponent with the ball. The cards were being dealt and the Sharks were picking up pocket aces. By the Storm picked their cards up it was Monday morning and what they thought would be as high as a pair of kings which normally comes with the Minor Premiership, had been downgraded to a classic ‘Montana Banana’ (9, 2, off suit) thanks to the charge of Smith and they realised that the river has to be beyond generous to get into the game. But enough poker talk (although if you’re a Manly-Warringah fan you’re now encouraged to get involved in the high stakes poker world thanks to a new sponsor they’ve got on board… check their website for details) and back to the footy. In short, Melbourne are in deep poop entering Friday’s clash and the Sharks are holding all the aces. In their Qualifying Final defeat of the Raiders, Cronulla demonstrated the kind of composure under pressure that only the best teams have at the pointy end of the year. Canberra had all the quality field position in the first half and yet at halftime the Sharks had built a 14-0 lead thanks largely to their ability to take full advantage of the three scoring opportunities presented to them by the Raiders. Had Luke Covell’s radar been on target, an 18-0 lead would’ve completely shut the Raiders out of the contest. By the time the Sharks had responded to an early Canberra try in the second half with one of their own, Brett Kimmorley then demonstrated why he is back to the kind of game controlling form he had at the turn of the century as he pinned the Raiders back into their own end and choked them out of the game entirely. The end score might have flattered the Sharks slightly but it underlined that Coach Ricky Stuart has his team committed to finishing the job when they get in a position to win. The Sharks last loss was to the Warriors in Auckland in Round 23 and on that cold wet Saturday night ball control was the primary reason for their downfall. The pack also found the going tough in the heavy conditions and have spent the past month making up for that performance by being the driving force in the team’s current four game winning streak (defeating the Roosters, Tigers, Cowboys and Raiders in the process). Up front the much maligned Ben Ross has finally found his go-forward mojo and veterans Danny Nutley and Adam Peek are doing a good job in the front row rotation. The backrow has been the strength of the Sharks for the last few years and even with the retirement of Lance Thompson and the club’s decision to stand down of Greg Bird late in the year, the Sharks are still finding that the more things change in numbers 11, 12, and 13 the more they stay the same in terms of contribution to the team. Paul Gallen has moved to lock full time and has had a superb season carrying the hitup workload and third year prop Luke Douglas has moved to the second row to cover for Bird which is benefiting the youngster’s game greatly as he had been on the brink of burning out up front. But the real revelation in the backrow has been the transformation of Fraser Anderson by Coach Stuart from former outside back with suspect hands into a battering ram in both attack and defence on the right edge for the Sharks. When the Sharks lost Reece Williams to injury after just two rounds the Sharks needed someone to step up in that role and Anderson has been better than anyone could’ve hoped for. Another bonus is that all three played the full 80 minutes against the Raiders so Stuart can carry up to three props on his bench – Kade Snowden, Bryan Norrie and Nutley. 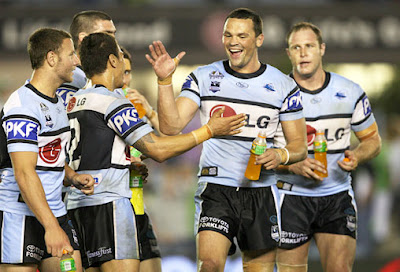 Then there’s hooker Isaac De Gois who is rapidly rising from anonymity and is arguably the best of the rest at hooker after the all-star trio of Cameron Smith, Robbie Farah and the now departed to England Danny Buderus. Stuart may have had a chance to re-sign the sneaky rake before De Gois decided to move to the Knights for 2009 but if he had his time over again you’d have no doubt the Sharks coach would move heaven and earth to keep the 23 year old. His form has pushed former starter Kevin Kingston out of the top squad entirely and into the NSW Cup. De Gois has made the Sharks a force again running from the dummy half position. If there are question marks surrounding the Sharks it is out wide, with a group of relatively low profile players getting the job done throughout 2008. Brett Kearney has done an amazing job converting himself from fringe first grade utility into a dynamic running fullback with excellent support instincts and he is Kimmorley’s go-to-guy in attack inside the 20m zone. Ben Pomeroy and David Simmons aren’t the sexiest centre pairing in the NRL and their respective wingers Luke Covell and Misi Taulapapa aren’t going to break any land speed records either – but the team has 36 tries from the quartet this season which is more than acceptable. The only element counting against the Sharks entering the contest is the insertion of young Blake Green into five-eighth to cover for the loss of regular pivot Brett Seymour to a serious knee injury at training after the Canberra game. The 21 year old Green has had just 6 appearances for the Sharks in 2008 after moving over from the Eels and just one game in his preferred five-eighth position in Round 3 when the Sharks lost 18-4 to the Titans (Green set up the only try Cronulla scored). In his 6 game stint with the Eels in 2007 he also played his best football exclusively at five-eighth setting up tries in both games (Round 4 and 13 both against Canberra). Defensively he’ll be tested by the Melbourne edge runners but he’s a solid unit so he should be up to the challenge. His role in attack will be to feed the outside men, run occasionally and present another kicking option alongside Kimmorley. Cronulla has made just three Grand Finals in their 41 years in the competition falling to Manly in 1973 and 1978 and Brisbane in 1997. They finished Minor Premiers in 1988 and 1999 only to fall one game short of the big one which may make the fact they finished 3rd on the ladder in 2008 a good omen. But this season they are rested, prepared and ready to go against an opponent that should be without their best player and be mentally and physically drained by the past two games. If Melbourne is conquered the Sharks will face either the Sea Eagles or Warriors in the Grand Final on October 5 – teams they have split the season series 1-1 with so far in 2008. Both sides are beatable, although one would think Manly’s style matches up better to handle Cronulla’s game plan of strong defence and a relentless kick chase. The Sharks simply won’t get a better chance than this to make the Grand Final and give the club a golden opportunity break their premiership duck.
By W D Nicolson

Previously published in 2005, 2006 and 2007; the NSC Rugby League Almanac will return in 2008 with a new format. Due to be released in October 2008 it'll have plenty of Rugby League information to sink your teeth into heading into the long off-season.

Register your interest by posting here or emailing wdnicolson@optusnet.com.au to make sure you don't miss out!

Morning Television... do we have a winner?

Tuned into the vast array of quality morning television today and was left missing the fact I don't have Foxtel in my office. Now before I rip into the three major Australian free to air television stations for their post-9am variety shows, I'd like to make the point that I understand there is an audience for these infomercial vehicles but I fail to see how there's a large enough market to keep three budget shows on the air Monday to Friday. So onto the ripping! Firstly I tuned into Mornings with Kerri-Anne on Channel Nine and got exposed to a chat session with her right hand man who is personable in his presentation but I can't get by the bondi bronze tans on both of them while they talk about... Tommy Emmanuel's history as a backup guitarist for a mum and pop band and a previous musician's inability to put on a bra before performing on the show. In short - gripping stuff! CLICK! Channel Seven's 'The Morning Show' - wow I'd hate to think how long that think tank too to come up with that name - is cooking up a dinner party feast. Now whenever there is food on the tele I'm in for as long as it takes for the final dish to be served up - so it should come as no surprise that the Lifestyle Food channel is locked in on the favourites list on the remote - but this time I saw the chef serve up salmon with asparagus... mmm not my favourite food combo but I gave the Price is Right Alumni and former Sports Presenter a chance to keep me interested with their throw to a break (well an infomercial) and I got 15 seconds of hair touchy feely and quite frankly SP didn't rough up Larry's hair enough to keep me around. The price is wrong sir! CLICK! Last stop on the morning show circuit to nowhere is the 9am with David and Kim effort on Channel Ten. They're talking to Kenny the Toilet entrepreneur and for the first 3 minutes I was genuinely interested in their conversation... then the graphic advertising the new show Kenny's made for 8pm tonight on Ten pops up and the cynic in me cries out against the shameless self promotion of the network! But having evaluated the other two station offerings in the previous 10 minutes - all of a sudden the seemingly normal way David and Kim talk to their guest (albeit in the classic interview seat arrangement) instead of the staged format you get overwhelmed with on most shows - is watchable. And that's the operative word for mine - watchable. You're not going to expect a brilliant mind nourishing show at 9am in the morning at the best of times but for those TV addicts out there who can watch during the week - the least the major free to air television networks could do is try a little harder to make their shows more watchable in between the infomercial segments that plague the morning show genre. How do you do that? Well that info’s not completely free like the criticism above. Ask and you shall receive TV producers…
By W D Nicolson