NOT The Footy Show Episode 70
- Round 17 Preview Podcast Released June 30, 2011 -
Right Click Save Target As This Link if you don't have iTunes.

Note: The order in which Special Fried Rice (the game we guarantee that team will win) is chosen rotates - this week Matt had 1st choice, Dave 2nd, Nic 3rd and Waz 4th. So it isn't as easy as it sounds to tip correctly each week.
You can check out who the NOT The Footy Show Experts picked for the 2011 Premiership via this link.
NOT The Footy Show Podcast is available every Thursday - subscribe now on iTunes so you don't miss out.
Check out the Round 17 Tipping Preview below...

30/06 Odds are courtesy of Sportingbet Australia 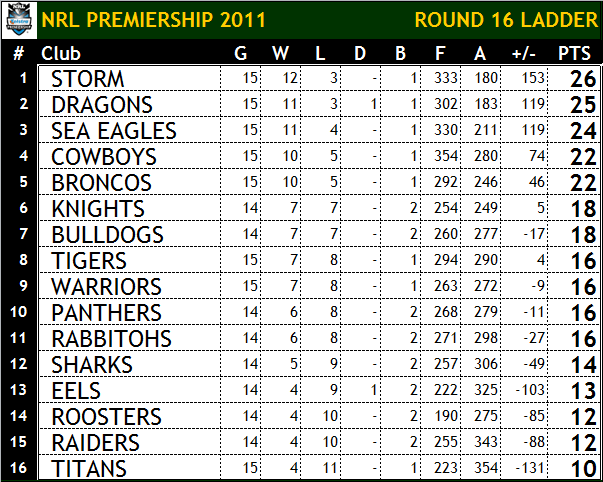 NRL TWEET PLAYER OF THE YEAR VOTES
AFTER ROUND 16 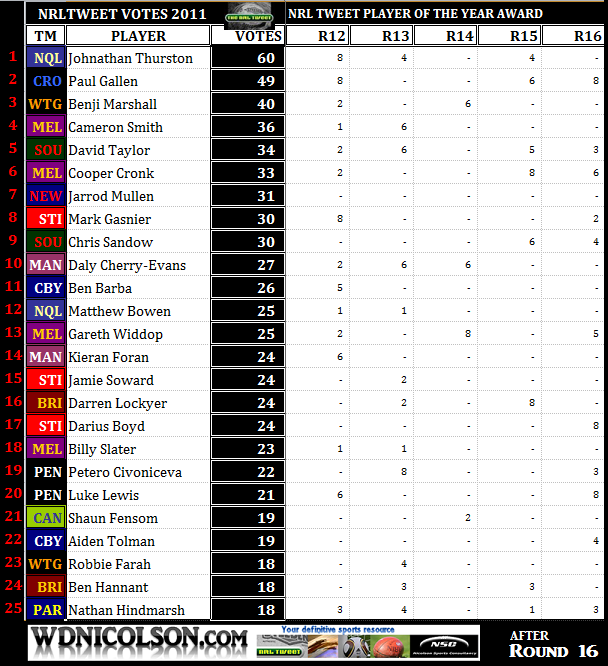 THE NRL TWEET's ROUND 17 PREVIEW

Check out the Video Preview or the Podcast - this text is updated Thursday Night with whatever has been said in the Video or Podcast.
Tipping + Fantasy Late Mail...
SMH and Other Late Mail 1/07 - The Broncos have announced that Josh McGuire will travel with the squad named on Tuesday and is likely to play after overcoming an eye injury - Kurt Baptiste is out with a shoulder injury. Jeff Robson is rumoured to have twinged a hammy at training and is in doubt for Parramatta (strong mail late Friday that he is OUT), while Jacob Loko (foot) and Shane Shackleton (hammy) are also in doubt. Reni Maitua is expected to make his return to the NRL after a few years out serving a drug ban.
The NRL Tweet's Tip...

ET's Rugby League Returns! + Petero's Try of the Year + Origin 3 Team Analysis + Transformers gets the Culture treatment + Round 17 Preview as it went LIVE on UStream!

| Join Dave, Nic, Matt, Maria, Eyes, Boots and Waz as we talk Rugby League and give our tips for Round 17. |
As per usual we talk all things 2011 NRL Premiership and give you our much anticipated Special Fried Rice selections.
Look forward to mildly entertaining you in 2011 - The NOT The Footy Show Team.

NOT The Footy Show Live - Episode 70

If you're not watching NOT The Footy Show Live from this page then you can stream it here.

Round 17 NRL Teams
As released on Tuesday June 28 - Each NRL Team for Round 17 is listed below.
All Teams have been analysed in comparison to the side they last put on the field.

ROUND 17 TIPPING PREVIEW
NOT The Footy Show Episode 70

PEN: Coote, Simmons, Vaivai, Tighe, Purtell, Burns, Walsh, McKendry, Kingston, Grant, Waterhouse (c), Plum, Smith. Bench: Seluini, Weston, Bell, Fatiaki, Walker, Seijka.
[Team Changes - The Panthers have Petero Civoniceva and Luke Lewis on Origin 3 duty. Kevin Kingston is not 100% with a groin problem and Junior Vaivai has a bruised knee. As a result Ryan Walker and Harry Seijka are in line to make their NRL debuts after being named on an extended bench and Nigel Plum returns from a knee injury in the second row. ]

NEW: W Naiqama (c), McManus, Sa'u, Lulia, Mata'utia, Roberts, Stig, Fa'aoso, De Gois, Tuimavave, Houston, Edwards, Southern. Bench: Hilder, Kaufusi, Ciraldo, Tolar, Karawana.
[Team Changes - The Knights didn't have Kurt Gidley (Hammy) last weekend but lose him this week to Origin 3 duty as well as Akuila Uate. James McManus has been named to return from an ankle injury but is no certainty and Adam MacDougall (despite not being named) is an outside chance. Ryan Stig and Tyrone Roberts are the halves. Steven Southern starts at lock with Neville Costigan out with a knee injury and Matt Hilder is on the bench with Cameron Ciraldo and Marvin Karawana - the latter are additions to the squad this week. ]
ROOSTERS v RAIDERS
@ SFS Monday Night

CAN: Massey, Ferguson, Croker, Thompson, Robinson, McCrone, Williams, White, Tongue (c), Learoyd-Lahrs, Picker, Papalii, Fensom. Bench: Buttriss, Harrison, Tilse, Thurling, Miller.
[Team Changes - Canberra have not named Josh Dugan but he is considered a decent change to play given the game is on Monday. Tom Learoyd-Lahrs starts for David Shillington to aggravated a pectoral injury and Trevor Thurling is the new player on the bench. Josh Miller has also been named on the extended bench but is yet to face a QLD Cup judicial charge for striking. ]
ROUND 17 BYES - All team info is for Round 16