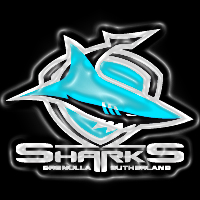 @NRLTweet's BRIEF
Expectations are sky-high in the Shire after another aggressive off-season signing spree, but how do all those forwards get enough minutes every week? Coach Shane Flanagan has an embarrassment of riches for the first time since taking charge of the Sharks - so it's almost a playoffs or bust scenario in 2013.

IMPACT PLAYERS
Michael Gordon is the prized pickup as he gives the Sharks exactly what they needed - a guy who can break the line by himself. He's locked in at fullback for 2013. International Luke Lewis could be just as important if he gets the right role in the side, while Beau Ryan is a very nifty signing, as is Jonathan Wright who did a good job on the wing for the Dogs last year. Then there is Chris Heighinton who is a handy addition but where does he fit in?

PREDICTED ROUND 1 TEAM
Bryce Gibbs is a big pre-season casualty with an Achilles injury, so Ben Ross might get a first grade repreive after falling behind Mark Taufua and Jon Green on the prop depth chart. Todd Carney expects to be named for Round 1 but he's no certainty, with Chad Townsend on standby. Luke Lewis should also be fit but may come off the bench. Ben Pomeroy has had no football yet, so Matthew Wright is favoured to start the year in first grade. There's a chance Anthony Tupou could miss out entirely...

YOUNGSTER WATCH
With such a veteran squad, opportunities in the top grade will be few and far between for the youngsters in the squad. Sosaia Feki is a big centre who plied his trade in NSW Cup last year after joining from the Warriors, while backrower/centre Tupou Sopoaga was picked up from the Dogs this off-season. The club is very high on NYC rake Michael Lichaa and he is probably 3rd on the hooking depth chart - meaning if John Morris or Isaac De Gois get hurt he might get a cup of coffee in the top grade this year.

HOME GAME YOU CAN'T MISS
The season opener isn't a sexy matchup with the Titans in town for the first Sunday Night footy game, but Round 4 against the Dragons on March 30 at 'Sharks Stadium' is a biggy. Not only because it is a local rivalry, but the Sharks think they are a contender this year and they can shut up the vocal fans of their rival with a convincing victory early in the season.

PLAYOFF CHANCES
Don't count your chickens...
But the depth of the Sharks and the extra quality they added in the off-season makes them a superb chance of playing in September. The concern however is the health of two key parts from last year's playoff run - five-eighth Todd Carney and prop Bryce Gibbs. Carney is 50/50 for Round 1 which suggests he's going to be short of a run for the first month or so of the season, while Gibbs misses 3 months after re-injuring his Achilles in a trial. As great as their recruitment has been - uncertainty over their contributions in the first half of the season might keep them out of the running for the Top 4.

@NRLTweet's PREDICTED REGULAR SEASON FINISH
6th | Management has done a fantastic job of reshaping the Sharks the past two off-seasons and the Cronulla faithful expect this squad to compete for a premiership... but realistically do the words 'contender' and 'Cronulla' belong in the same sentence? Season 2013 is this squad's chance to prove that to be the case.

Can Michael Gordon or Todd Carney (2010 Winner) take Ben Barba's mantle as the game's best player in the 2013 @NRLTweet Player of the Year Awards?