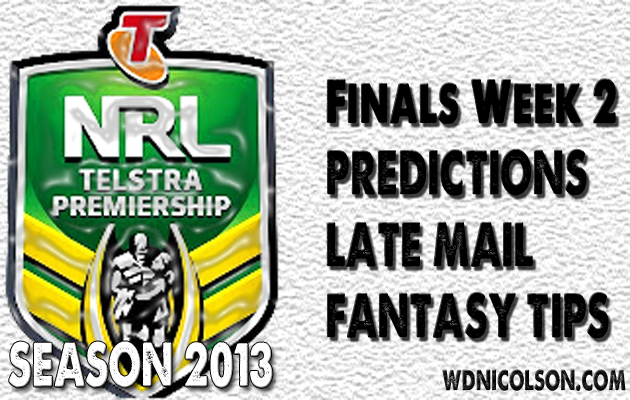 If anyone you know is complaining about the Top 4 getting all the advantages in the Finals?

Tell them to shut up now, because if you finish that high you should get every advantage you've EARNED.

The Cowboys can moan all they want about this year's playoff departure (last year's was far worse in terms of a decision that cost them) but if they hadn't decided to wait til the last month a bit to play decent footy - they might have got a Top 4 berth and had a second chance after the refs stuffed up.

The Dogs had a bad start and were mediocre for the rest of the season, so it makes sense they get bounced in the first week of the Finals.

The Sharks and Knights earned their second chance this week, while Melbourne and Manly won 31 games between them out of 48 starts - so they certainly deserve a second bite at the cherry.

So we get Elimination Finals this weekend - ENJOY and GET TO A GAME PLEASE! 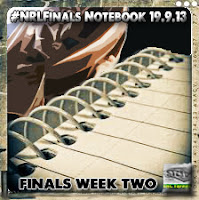 You can track Finals Week 2 Votes via #NRLTweetPlayerofFinals and Voting Allocation is below (3 Voters per game in first three weeks, then 5 Voters for the Grand Final - all using 4-2-1 Votes) as is the rest of what you need for your weekend of Finals Footy.

Latest of Late Mail and Qualifying Finals Tips below!

For our analysis of Tuesday team selections for Finals Week 2 - click here.

@NRLTweet's PREDICTION:
With Carney next to no hope - and he'll be a non-running passenger if he does play - the Sharks will struggle to score more than two tries... if that.
Robson has a crack but the Sharks don't have a playmaker at fullback or hooker and this, my friends of the black, white and blue - is a huge problem to get past Manly this week or Souths next week. Lewis or Graham will spend time in the halves but both are ball runners, so Robson will run the organisation, playmaking and entire kicking game... that's too much for him to do on his own and why playing Townsend made more sense.
Manly may still not have Brett Stewart, but in Foran and Cherry-Evans - they have points in them, certainly against a team like Cronulla which will give them field position at different stages, and aren't the same defensive team as Easts are.
Put simply - for Cronulla to win, Manly can't score more than 2 tries, and the Cronulla forward pack has to bash Manly's unit into submission from the very first set.
I've got Manly by 18 points but I expect this to be 12-6 for a long period of the match, before DCE and Foran put the game beyond reach in the final 15 minutes.

LATEST OF LATE MAIL:
Manly - Brett Stewart is set to miss again - remember we told you this before Week 1 - and Hiku will deputise. The rest of the team will turn out as named.
Cronulla - Carney may yet take the field but don't expect much... Townsend may be a late inclusion if Carney pulls out. Fifita looks likely to play as well but he will do so on one leg. Lewis and Graham aren't anywhere near 100% but both will play.
PRE-GAME UPDATE: Brett Stewart is out, Hiku into fullback. Carney and Gibbs won't play, Townsend to five-eighth, Lewis into 2nd row and Bukuya back to the bench.

@NRLTweet's PREDICTION:
Newcastle may have been the one team in Week 1 that played to their potential - sweeping aside an ordinary Canterbury team after absorbing the Dogs' best shot early.
Melbourne had plenty of quality ball when trailing the Bunnies before halftime and in the 2nd half but a Video Referee call against them ended their charge... but while they weren't particularly good, neither were the Rabbitohs everyone. Souths just started well and had points on the board before you knew it...
If Melbourne harass Mullen all night and quieten his kicking game - the Knights will have to lean on Roberts - who despite his young career to date, hasn't stepped up when Mullen hasn't been a factor. Newcastle will stay at it but in the end they'll simply be outclassed in Melbourne.
The Storm are the defending premiers for a reason, they might get tested by the Knights all night - but they'll win.

LATEST OF LATE MAIL:
Melbourne - Finch is unlikely to start but may get a spot on the bench if Bellamy wants his presence in the squad on game day. Kenny Bromwich probably would miss out if Finch comes in.
Newcastle - The Knights are usually open about any changes by Friday of each week - so stay tuned if they decide to include Craig Gower.
PRE-GAME UPDATE: McManus is out with an ankle injury and Kevin Naiqama replaces him, Knights unchanged otherwise, Storm 1-17 with Finch missing out.

What are your tips for the Elimination Finals?