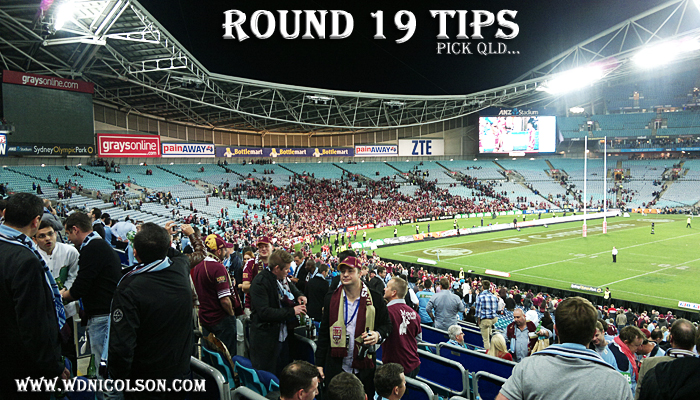 All this New South Welshman can do is smile politely, tip my lid and say 'too good Queensland, too good.'

So enough about this useless Origin concept okay?

We are all a bit bored with the way the State of Origin Series continues to build up to the max then majorly disappoint at least one state involved in proceedings.... right?

NSW will never get a better chance at breaking the streak than they did in 2013... they were by far the better team in Game 1 and throughout the Series - Greg Inglis was hardly a factor... and Greg Inglis is the best big game player in Rugby League.

Mitchell Pearce cops a lot from fans and the media alike... win a series with your ability and they might shut up. As of yet - that seems beyond him.

He's a good footy player but with Jarryd Hayne missing for NSW - he had to be a great one on Wednesday night... and for the 13 games he has represented NSW - he hasn't been a great player.

It is time to move on boys and girls.

For our analysis of Tuesday team selections for Round 19 - click here.

The Postman will have more NRL Dream Team and NRL Super Coach picks before Round 20 when all the Byes are done and dusted. But there are some select pearls of wisdom below...

@NRLTweet Player of the Year

Voting Allocation for Round 19 of the NRL is below.

@NRLTweet's PREDICTION:
Benji's last game at Leichhardt... is that enough to say the Warriors are jinxed before the contest begins? I'm not convinced the Tigers are good things, but that's the same reason I'm tipping against the Warriors. The boys from Auckland are a good side these days (that is they sucked deluxe at the start of the season for about 8 weeks) but they are a bit flighty - like their halfback Shaun Johnson. I'm backing the Leichhardt/Benji factor here... but by the slimmest of margins: Tigers by 1 point.

LATEST OF LATE MAIL:
TIGERS: Aaron Woods only played his first stint in Origin 3... so will have plenty of motivation in this one. Marika Koroibete is making his comeback in NSW Cup due to the form of Simona and Nofoaluma.

LATE UPDATE? Are 1-17.
The Postman's DT/SC TIP: If you were planning on upgrading Benji... wait til after he plays this week for 2 reasons. 1 - he could go nuts in his last game at Leichhardt, 2 - the players you want to upgrade to are on the bye.
WARRIORS: Packer and Gubb miss with injuries, so Suaia Matagi and Sam Lousi come into contention for the final bench. Expect Manu Vatuvei to play, so Ngani Laumape will miss out.

LATE UPDATE? Gubb out, Matagi in. Lillyman starts for Matulino.
The Postman's DT/SC TIP: You might be lucky next week...
If you have a DT/SC question grab The Postman on Twitter @NRLTweet and I'll answer there.

LATEST OF LATE MAIL:
RAIDERS: Papalii is fit after his cameo in Origin 3. David Furner will continue with the Anthony Milford/Reece Robinson rotation at fullback, while Jake Foster could come in on the bench for Jarrad Kennedy. There may also be a late change on the wing with Bill Tupou acclimatised with his new team for a few weeks - with Sami Sauimula making way.

LATE UPDATE? Brett White may be a late addition with Kennedy or Mataora missing out.
The Postman's DT/SC TIP: Milford at fullback is a DT goldmine for the tackle breaks... but his price means you might need to discover a goldmine to be able to afford him.
EELS: Does Jarryd Hayne actually play? You can't rule it out entirely, especially if he gets on the bus to Canberra. Other than that - who knows with Parra... did anyone know that Ken Sio was hurt last week? Chris Sandow? Roll a dice with the final team... Ricky seems to be, poor fella.

LATE UPDATE? Are 1-17.
The Postman's DT/SC TIP: You might be lucky next week...
If you have a DT/SC question grab The Postman on Twitter @NRLTweet and I'll answer there.

@NRLTweet's PREDICTION:
If Cronulla had their full complement of troops - you'd like their chances against the Roosters, given the way their forward packs match up. But unless the Roosters lose a big contingent of their Origin reps - (like the Sharks have with Paul Gallen out and Luke Lewis likely missing), you are left with no choice (a good choice at that) but to take the Roosters by 12 points.

LATEST OF LATE MAIL:
ROOSTERS: Maloney, Pearce, Cordner and Jennings will all backup - while Cordner may come off the bench after a tough initiation into the Origin arena - so Mitch Aubusson or Aidan Guerra could start instead. Roger Tuivasa-Sheck is expected to play after missing with a concussion two weeks ago. SBW is OUT.

LATE UPDATE? SBW is OUT. Liu onto bench. Aubusson starts.
The Postman's DT/SC TIP: James Maloney looks tempting here boys and girls... very tempting as a Point of Difference.
SHARKS: Lewis almost certainly won't backup with a calf tear and a dodgy shoulder that probably needs surgery. Fifita will play, while Jeff Robson is unlikely with a calf injury of his own. There could be a reshuffle come kick-off as the Sharks like to do in their forward pack.

LATE UPDATE? Lewis out, Taufua onto bench. Mutiple positional changes.
The Postman's DT/SC TIP: Don't grab Gallen yet... I beg of you.
If you have a DT/SC question grab The Postman on Twitter @NRLTweet and I'll answer there.

@NRLTweet's PREDICTION:
Both teams have hit some form of late - Penrith winning three in a row against the Eels, Titans and Dragons and the Knights knocking off the Dogs and Titans back to back. There's still a major question mark over what kind of Newcastle team shows up on the day - and for that reason (coupled with Penrith's attacking style of play recently) - you need to stick with the home team and take the Panthers by 6 points.

LATEST OF LATE MAIL:
PANTHERS: Brad Tighe was diagnosed with a 6-8 week knee injury on Monday, and named in their team on Tuesday. So do not be surprised if he doesn't' play - Josh Mansour or Travis Robinson would come in for the injured centre. Sika Manu may also return as we inferred on Tuesday.

LATE UPDATE? Tighe out, Naiqama in.
The Postman's DT/SC TIP: If you are able - Matt Moylan can be a decent downgrade option this week... but don't choose to play with 16 players to do so.
KNIGHTS: Boyd and McManus will backup, while Zane Tetevano looks set to be 18th man with Korbin Sims preferred in the 17.

LATE UPDATE? Sims out, Fa'alogo in.
The Postman's DT/SC TIP: You might be lucky next week...
If you have a DT/SC question grab The Postman on Twitter @NRLTweet and I'll answer there.

@NRLTweet's PREDICTION:
Manly have dusted two inferior opponents in two weeks... the Titans have been crushed by teams they would've fancied themselves being better than the last two weeks. Gold Coast coach John Cartwright says he won't make Nate Myles and Greg Bird backup from Origin 3 - so how can you possibly pick the Titans? Sea Eagles by 14 points at Brookvale - DCE to have a stormer.

LATEST OF LATE MAIL:
SEA EAGLES: Cherry-Evans will backup, Watmough is likely given the game is Sunday arvo. Justin Horo should be recovered from a slight knee strain suffered last Monday.

LATE UPDATE? Are 1-17.
The Postman's DT/SC TIP: You might be lucky next week...
TITANS: Myles and Bird are unlikely to play - but if they make the trek to Sydney - don't rule them out entirely. Also check if William Zillman makes the trip south. Brad Takairangi is no certainty, and given the depth named on the Gold Coast bench - this lineup could change a lot come kickoff with Taylor and Falloon also returning from injury.

LATE UPDATE? Takairangi/Ioane out, Michaels/O'Dwyer in.
The Postman's DT/SC TIP: You might be lucky next week...
If you have a DT/SC question grab The Postman on Twitter @NRLTweet and I'll answer there.

@NRLTweet's PREDICTION:
No Greg Inglis for the Rabbitohs - so that 18.5 head start to the Dragons would seem overs if they could actually attack... Merritt is likely to play fullback with Justin Hunt coming in on the wing - so Souths can cover the loss of Inglis fairly easily. The Dragons have changed things up in the halves by picking Adam Quinlan as their new playmaker... he's a fullback boys and girls. They also get Matt Cooper back from injury but you simply cannot pick the Dragons here. The Inglis factor will only impact by how many points Souths win by. Rabbitohs by 20 points.

LATEST OF LATE MAIL:
RABBITOHS: Inglis is out with a knee injury sustained in Origin 3 - so Merritt goes to fullback and Hunt to the wing. Te'o and McQueen's fitness will be assessed on the weekend.

LATE UPDATE? Sounds like Te'o and McQueen will play. Hunt in for Inglis, but Merritt likely to play FB.
The Postman's DT/SC TIP: Do you keep Inglis? For at least this week - YES. Wait til the full complement of NRL WFBs are back to pick and choose. If you have to move him now - Dugan makes the most sense... but he's injury prone too.
DRAGONS: Merrin left the field after his try in Origin 3 but at this stage he probably backs up given it is a Monday game, while Brett Morris will play. Cooper looks set to finally return, with Matt Prior or Nathan Green his cover. Does Dugan (who will backup despite limping in Origin 3) play five-eighth and Quinlan fullback?

LATE UPDATE? Dugan, Morris and Merrin play - but Merrin on bench with Frizell starting. Vidot/Prior come in for King/Stockwell.
The Postman's DT/SC TIP: You might be lucky next week...
If you have a DT/SC question grab The Postman on Twitter @NRLTweet and I'll answer there.

What are your tips for Round 19?
Are you taking any advice from our Awesome Foursome panel this year?
Let us know by commenting below or replying on Twitter.