Quick Friday Blog from The Postman for all you NRL Dream Team and NRL Super Coach Tragics... 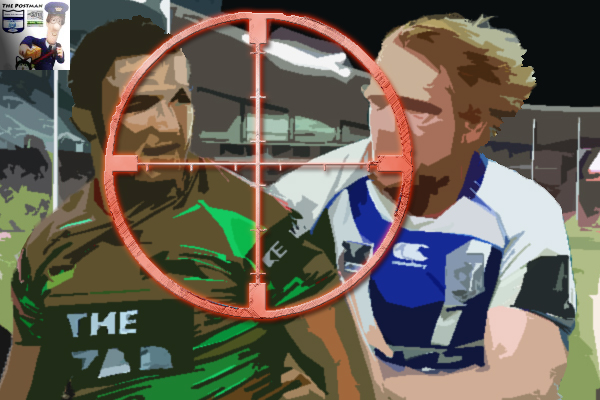 The question of who is better for your Fantasy NRL squad is a tricky one... that is unless you've been able to grab both in both formats - NRL Dream Team and NRL SuperCoach.

But if you have to choose one or the other in either game - here's the skinny on the two Englishmen.

Sam BURGESS - Rabbitohs
DT: $372,700 @ 49.5ppg, 62 BE
SC: $344,200 @ 72.9ppg, 83 BE
DT Skinny: Tackles are still the bee's knee's in DT - and this year Burgess is coming to the party breaking the 30 tackle mark in over half his games. But he's not going to crank out a 40 tackle day every week, making his work with the ball so much more important for a consistent score. Burgess gives you tackle breaks (3pt gold in DT), mid-range metres and not quite enough offloads a game to offset his tackle count. But he also makes errors and gives away penalties. The upside is he crosses the line - in DT a big facto when it comes to forwards who have great base stats. He has tries in 4 of his last 6 games. His range of points however is larger - 30-67pts.
SC Skinny: In SC those tries and line breaks make him a SUPERSTAR when he's on. When Baby John Burgess scores or sets up a try - he scores between 80-96pts. When he doesn't - he can still crack 70 but sits in the 50-60 range a little to frequently. As we know - SC rewards the important attacking plays like nobody's business - so tally up his 4 tries and 9 line breaks and you have POINTS! Another plus of SC is his errors/penalties aren't as punishing to his overall score.

SO WHO DO WE RECOMMEND?

Quite simply: it is Burgess in NRL SuperCoach, Graham in NRL Dream Team.
As we've noted - if you can get both then you are laughing, but if you have to have either or - we say Graham is the best choice in the tackle dominated game of DT and Burgess makes your team extremely potent in SC.
So if you are stocked up deluxe up front like the Dixie Ice Creams (The Postman's Team) are in SC - Farah, Woods, Smith, Luke already on the books and Burgess in the backrow - Graham isn't a must-have. But the flip side is he probably is in DT - because he's playing Round 18 and Hasler leaves him on as long as he can go.

From Will Burke on Twitter:
hey there, would you consider trading out Dugan? Or do you think he should be final 17 for supercoach? Thinking of cashing in.

The Postman Says:
Dugan is currently $333,000 with a BreakEven of 83... and is suspended for Round 17 and on Origin/Bye duty for Round 18.
That is the downside.
The upside is he has scored 115, 89 and 50 in his last 3 starts, and has two other scores 73 and 90 amongst his total of 7 games - that scream: HOLD.
BUT... he's not known for holding together physically and he's playing on a team that can't create chances... basically the book on Dugan is he'll do his 'thing' and if it benefits your team (that is your NRL squad) then great... but he can also stagnate your attack big time because he doesn't mesh at all well with those around him. What he does however - is great for DT/SC.
IF he holds together physically - he's going to bust a million tackles (2nd worst stat behind Try Assists in RL)  that are gold in DT (3 points each) and not bad at all in SC (2 points a pop) which means you should get base stats worth approx 30-40 SC points a week... without tries. That is Tackle Breaks + Runs (approx 15-20 a game - most above 8m) giving you 30-40 pts a week...
Meaning you need to compare having those stats plus a try every second or third week (and a few Line Breaks as well - which are SC gravy v DT dust) and he's probably a keep unless you have the cash/trades to upgrade to a guy who will score tries almost every week.
So to sum up: In DT he's a keeper, but in SC - if you don't have a more prolific try scorer and need to trade Dugan to get him - I'd lean towards moving him on.

From Craig Nightingale-Jones via email:
Lo Postman - Has Matt Ryan been launched into space?
Can't find any info anywhere. He played rnd 15 then.......poooooof!
Hasn't been put on the Eels injured list and hasn't been named in NSW cup.
Cheers, Cwnj

The Postman Says:
I knew he'd dropped out of the side against the Bunnies a few weeks ago - a bit of digging found that he'd had a head clash at training that week.
So that'd explain why he hasn't been named anywhere... the info that he hurt himself came from the Eels site - any updates etc however can be found nowhere on the Eels site... surprise surprise.
From a DT/SC angle - Matt Ryan should be nowhere near your squad anymore...

From Michael Landsberg on Twitter:
Any idea what is happening with Peta Hiku's SC BE following last week? Still -22 or +80ish? Likely to come in for Wolfman?

The Postman Says:
Hiku's SC BreakEven is -24... yep, MINUS 24 so he didn't retain his DUCK EGG last Monday. But Brett Stewart is healthy and Jorge Taufua and David Williams are entrenched on the wings. At this stage the Wolfman isn't being stood down for that off-field incident so it looks like Hiku has to bide his time til possibly next year for a fulltime gig... but you don't care out 2014 - so here is my advice for the rest of 2013.
Hiku at $176,800 isn't breaking your back sitting there as a backup in the wing/centres but he also has almost 100k worth of upgrade cash available to you if you've got the 2 trades you need to make the most of it.
I look at Hiku this way - if you've got Brett Stewart, Taufua or Williams in your actual SC squad - he's not a bad hold because he plays first grade if they don't - but if you have none of them he's probably more use as that 100k boost to your spending money.
I don't have Hiku in either DT or SC, had him in another variation and cashed him out last week for Jack 'My Groin Just Snapped' Wighton where tackles are BY FAR the most important stat - and he'd made me money there as well.
I say SELL. Even if it is to James Roberts - you get extra cash and you should be upgrading from the Peta Hiku's of the world right now anyway.

Good luck this weekend Tragics!
Hit me up on @NRLTweet for anymore questions.