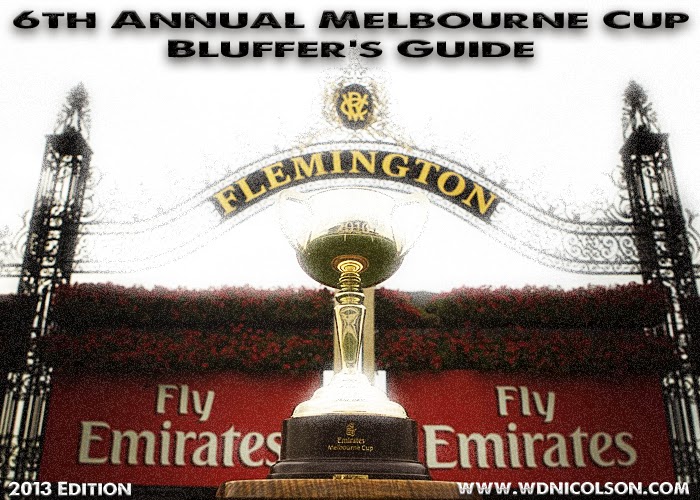 Welcome to the 6th Annual 'Bluffer's Guide to the Melbourne Cup'.

It is firmly entrenched as the go-to piece here on www.wdnicolson.com every November, as we take a less than inspired look at the huge field for the 3,200m race at Flemington and judge the horses in the race based purely on the quality of their name.

But you aren't here for any punting tips, you're here to see if for the 6th straight year I can come up with some moderately interesting lines pertaining to the competing horses in the 2013 Melbourne Cup field right?

As we stress here on www.wdnicolson.com every year, think long and hard about what you could spend (or save) the excessive money you punt with on Melbourne Cup day... in short, don't be an idiot.

Anyhoo, to the Bluffer's Guide for another year and each horse has its current Sportingbet prices (as of 4/11/13) listed next to the horse's name and then you can read the 'Scouting Report'.

Now all horses are listed 1 through 24 with the field confirmed on Saturday - and given there's a lot of re-runners from recent years, we haven't tinkered with some punfection...

The Name is ALL that matters - 2013 Bluffer's Guide

RED CADEAUX #3 @ $61.00
Has a great name but is yet to win this year and we both know how much stock I put into actual on-course performance with these rankings...

SEA MOON #4 @ $15.00
Good to see the owners of Green Moon and Sea Moon were creative when it came to naming this batch of horses... I guess it could've been born at night and the owner looked up and said...

FIORENTE #6 @ $9.00
Current favourite... but last year's bio is worth repeating.
Taking time out from it's one horse campaign in the Italian Serie A... where it sits in a very credible 4th after 11 games. So look for a Top 6 finish here...

ROYAL EMPIRE #16 @ $17.00
With all due respect it's no Galactic Empire... unless the Emperor himself is taking the reigns... but nice to have two Star Wars references on offer this year kids.

VOLEUSE DE COEURS #17 @ $16.00
I don't want to know what this means in French... it's cooler sounding without that knowledge. For all we know it could be 'Runs from Toilet'.

RUSCELLO #24 @ $51.00
Last horse and it's giving me nothing... where is Waikikamukau when you need it in the field to keep things interesting?

Ok that's the name game taken care of... now to the actual predictions.

2013 PREDICTIONS as of November 4...
(I reserve the right to change once the final field is set, will lock in my selections by Tuesday 3pm) Let's be honest - we've got no idea about any real chances here but hopefully this wasn't the worse read you've had in early November.

So after that mishmash of referential wit, ask yourself why aren't your Melbourne Cup selections based on name alone?
Feel free to comment below or tweet me @wdnicolson
By W D Nicolson