#NRL 2014: Want the Skinny on next year's signings by the Canterbury Bulldogs? #NRLRecruitment 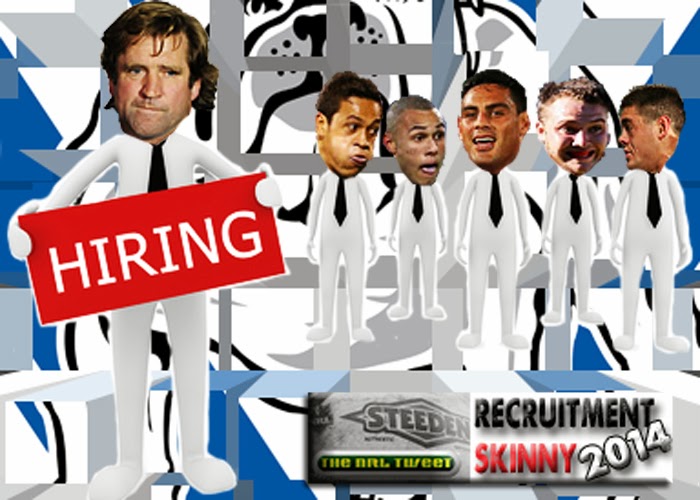 The Bulldogs are still pursuing a fullback to replace Ben Barba but is the playmaking custodian they need already in the system?

- Superstar First Grader, Will Win Games
None Recruited As Yet

- Star First Grader, Representative Quality Player
None Recruited As Yet

- Fringe Roster Depth, Unheralded Player
Pat O'Hanlon - Prop/Second Rower from Eels
Kayne Brennan - Outside Back from Dragons
Tyrone Phillips - Outside Back from Rabbitohs
Damien Cook - Fullback/Hooker from Dragons
OUTGOING TALENT:
Ben Barba to Broncos
Kris Keating to UK
Dene Halatau to Tigers
Martin Taupau to Tigers
Danny Galea to UK
Paul Carter to Titans
Leilani Latu to Panthers
Other 2013 Bulldogs squad members are believed to be off-contract for 2014 but have yet to sign elsewhere.
The current Canterbury Off-Season Roster is available per the Official Club Website Player Profiles Page

Reni Maitua (Note: Maitua has been suspended by the club following being charged with assault on Monday November 25) is/was the biggest name recruited but he's going to be doing it tough to play a significant role in the first grade side. That's because his best position is in the backrow and the Dogs are positively stacked there with Frank Pritchard, Greg Eastwood, Josh Jackson, Dale Finucane and Tony Williams clearly ahead of him in the pecking order. His best chance of earning a spot in the 17 is to embrace replacing Dene Halatau in the utility role and be prepared for a massive cut down on minutes. That said - it might bring out the best in Maitua and it may be his only ticket into the 17.
Chase Stanley either has to beat out Tim Lafai or Mitch Brown for a centre/wing spot, or hope Josh Morris or Krisnan Inu get moved to fullback permanently if he wants a spot in first grade. Stanley is a good player and fine goalkicker but with Inu and Trent Hodkinson already in the lineup, the Dogs don't need him for his kicking. His pre-season needs to be first class to get a look in for Round 1 should the Dogs keep Inu and Morris in the three-quarter line - and even more so if Josh Hoffman or Kevin Locke make their way to Belmore by Christmas.
Pat O'Hanlon is signed on as depth, because he doesn't look any hope of breaking into the front row rotation even with David Klemmer suffering a serious toe injury this off-season and the aforementioned stacked backrow pretty much ends his chances of playing there as well, while Kayne Brennan and Tyrone Phillips face plenty stiff competition out wide to play anywhere but NSW Cup in 2014. Damien Cook is a genuine utility who joined the Dragons as a hooker (he played fullback for them in NSW Cup last year) - so don't rule him out as the smoky for that utility spot in the 17 if Maitua can't adjust to the role.

(Former NYC players on NRL roster per bulldogs.com.au)
Moses Mbye, Patrick Templeman, Lloyd Perrett, Jon Sila, Jaline Graham and David Minute.
So who replaces Barba? Well, Coach Des Hasler can go with Morris, Inu, Perrett or maybe Templeman (who perhaps has the playmaking skills the Dogs could use in the #1 jersey)... or whichever of Hoffman or Locke the Dogs sign first. Point is - from a recruitment perspective they haven't addressed their biggest need yet and added depth to an already deep roster. That said they might get more impact from their rookies than their signings in 2014 anyway. It's an INDIFFERENT grade for the Dogs right now, based on what they've signed, not what they already have.
Let us know what you think of their 2014 Recruitment Class by commenting below or replying on Twitter.

PS. This is the second of 16 NRL Recruitment Guides for 2014 on www.wdnicolson.com... you can find Brisbane's Recruitment Overview here.
If you Like what we do here - a Tweet/FB Post plug tagging @NRLTweet wouldn't go astray kids using a link to this article.
Given what you get here on this site for free during the season, it's not a huge ask for a plug if you actually get something of value of what we produce. Cheers and thank you.

James Maloney won the #NRLTweetPlayerofFinals Award and the Grand Final Man of the Match after his Roosters defeated Manly 26-18 in The Decider. You can hear the full voting results and Grand Final cap with Waz and Maria on Episode 145 of NOT The Footy Show - the Grand Final Review Podcast.

You can subscribe to the NOT The Footy Show Podcast on iTunes and who knows we might be back for an off-season show sometime soon... then again.