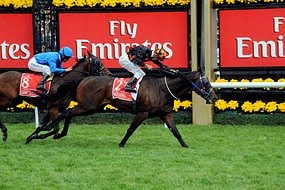 Winning jockey Corey Brown had finished 2nd last year on Bauer in a photo finish but was estactic with the 2009 result.
‘‘Last year was very disappointing but I’ve got it,’’ Brown said.‘‘I’ve finally won the Melbourne Cup.

‘‘My dream has come true, I can’t describe it, it’s unbelievable." 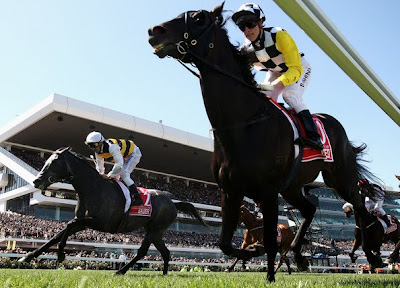 
The problem is - as important as Melbourne Cup Day seems to be to people on the first Tuesday in November - the vast majority of people who follow the race will do so with little to no actual idea about the horses running.

1. Viewed @ $5.30
It won last year so it is the favourite for this year's race. Sub-editors around the country probably used the James Bond inspired 'Viewed to a kill' for the headline last year - the question will be what can they come up with this year if it gets up?

2. C'est La Guerre @ $41.70
My punting friend in Brisbane texted me through this roughie with much confidence this morning - and he's no mug when it comes to punting... except of course on the Melbourne Cup. What is fun is trying to pronounce the name when you don't know how it should sound.

3. Fiumicino @ $54.80
Sounds like a caffinated beverage... so it won't have a problem staying awake for the duration of the race. Winning however... might be more of a challenge.

10. Zavite @ $49.60
Won the Adelaide Cup earlier in the year, but that my friends is not the Melbourne Cup.

11. Alcopop @ $7.00
Questionable name for a horse - encouraging the kiddies to get on the juiced up pops... but has four straight wins heading into the race so will be a punter's favourite by start time.

14. Newport @ $54.30
Named after a northern beach in Sydney but will finish well south on the racetrack today.

15. Warringah @ $32.90
Has placed in four its last five starts to give you some food for thought including it as a placegetter.

18. Basaltico @ $44.40
Will sink to the back of the field like basalt... assuming of course basalt is a heavy rock/mineral and does indeed sink.

22. Allez Wonder @ $16.90
I gather the name Alice Wonder was taken and the owners went with the poor imitation of Allez to compensate... Bart Cumming's 3rd horse in the race which is probably why it is a tempting price.

24. Leica Ding @ $27.90
Has some winning pedigree but there's better horses to choose from.

So who am I tipping for the 2009 Melbourne Cup?

With little to no idea (as you'd read above - I pretty much made it up as I went along) here is my Trifecta:

Enjoy the day and please bet smart if you are punting. Just think of all the Big Mac Meals you could buy for those $10 bets that get put on at the last minute on horses with absolutely no chance of winning...
By W D Nicolson