#NRL 2014: Want the Skinny on next year's signings by the Brisbane Broncos? #NRLRecruitment 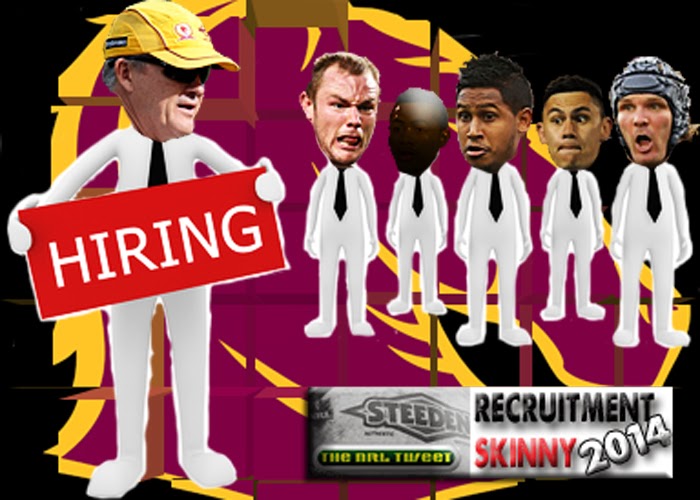 The Broncos are on their way to a sensational recruitment class for 2014 if they can tear Anthony Milford out of Canberra's hands before Round 1. Edit 27/11: Turns out, they'll get Milford but not til 2015.

- Star First Grader, Representative Quality Player
None Recruited As Yet

Ben Barba is a massive get, given he's only one season removed from winning the Dally M and while the Broncos would be smart to play him at fullback and let him roam like Canterbury did, he may end up at five-eighth if Anthony Milford doesn't make his way north in time for 2014 (Edit: Milford will be a Bronco in 2015 it was confirmed on November 27). That said, Josh Hoffman is a quality custodian but Barba’s best position is by far and away fullback and Hoffman is a very good option in the three-quarter line if not worth giving a trial at five-eighth.
Todd Lowrie will likely be in the final 17 but on the bench as a hybrid lock/prop (where he will vie with David Stagg for the role), while Daniel Vidot has a good chance of beating out Dale Copely, Jordan Kahu and Lachlan Maranta and (we all hope a fit-again) Jharal Yow Yeh) for a wing spot with late season sensation Corey Oates.
Stewart Mills and Marmin Barba are QLD Cup standard depth and likely little more, while Martin Kennedy should join the prop rotation with Sam Thaiday, Josh McGuire and Ben Hannant to make a quality foursome. The club also picked up a solid prop in journeyman Jon Green who replaces the departed Scott Anderson as the fringe front rower in the squad.
Obviously the biggest question is what do Brisbane do in the halves alongside Ben Hunt – who if we are honest has yet to emphatically claim the #7 jersey and looks set to win it by default with Cameron Cullen, Zach Strasser and Ashley Taylor the only names from the club's off-season roster who appear to be a chance of pushing him.

(New players on NRL roster per broncos.com.au)
Ajuma Adams, Kodi Nikorima, Francis Molo, Cameron Cullen, Jo Ofahengaue, Zach Strasser, Duncan Paia'Aua and Ashley Taylor.
Even if the Broncos don't get Milford yet - this is clearly a GOOD recruitment class, giving Coach Anthony Griffin the tools to lift the Broncos back into playoff contention in 2014.
Let us know what you think of their 2014 Recruitment Class by commenting below or replying on Twitter.

PS. This may be the first of 16 such Recruitment Guides on www.wdnicolson.com... or if not on here, hopefully you'll read it somewhere else sooner rather than later.
If you Like what we do here - a Tweet/FB Post plug tagging @NRLTweet (Or NOT The Footy Show on Facebook) wouldn't go astray kids using the hashtag #NRLRecruitment and a link to this article.
Given what you get here on this site for free during the season, it's not a huge ask for a plug if you actually get something of value of what we produce. Cheers and thank you.

James Maloney won the #NRLTweetPlayerofFinals Award and the Grand Final Man of the Match after his Roosters defeated Manly 26-18 in The Decider. You can hear the full voting results and Grand Final cap with Waz and Maria on Episode 145 of NOT The Footy Show - the Grand Final Review Podcast.

You can subscribe to the NOT The Footy Show Podcast on iTunes and who knows we might be back for an off-season show sometime soon... then again.