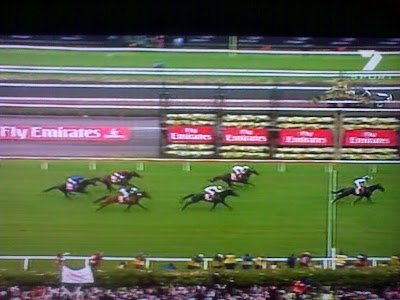 Americain Wins the Melbourne Cup!
So You Think couldn't hold on to its lead in the straight as the French connection led Americain to its first Melbourne Cup win.
Maluckyday was 2nd, So You Think was 3rd, Zipping 4th, Harris Tweed ran a very strong 5th & Holberg was 6th.
Here was the Pre-Race Preview:
The Bluffer's Guide to the Melbourne Cup.
By W D Nicolson November 2, 2010 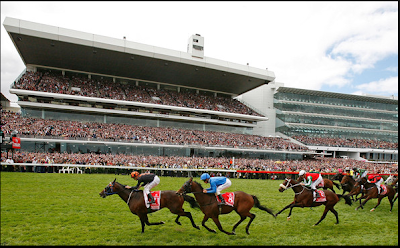 Last year Shocking took out the 'Race that Stops a Nation' but in 2010 it would truly be a shock if Shocking defended its title in the Melbourne Cup.

That's because a certain 'So You Think' is conquering all before it and is the raging hot favourite to win at Flemington this afternoon. If it wins - that'll be 13 Melbourne Cups for Bart Cummings... fair effort.

So You Think is at $3.40 on Sportsbet.com.au - and could be even shorter come 3pm, despite the track being downgraded to 'Slow 6'.

Welcome to the 2010 Melbourne Cup Bluffer's Guide... wdnicolson.blogspot.com's 3rd straight year of delivering nothing but dribble when it comes to Australia's biggest horse race.

Wrong and Wrong but entertaining reading I hope.

So here is the 2010 Melbourne Cup Bluffer's Guide - Where the Name Means More than Form.

1. SHOCKING - $11.50
When it won last year, then jockey Corey Brown proclaimed 'My dream has come true, I can’t describe it, it’s unbelievable.' If Shocking wins again in 2010 - Brown won't be upon it (he's on #7 Shoot Out) - even at $11.50, that repeat performance might take unbelievable to a whole new level.

2. CAMPANOLOGIST - $76.80
Every time I read this name I think it says 'Campaignologist' - either way I'm not voting for it at these odds.

3. SO YOU THINK - $3.40
It'll win... just like it has in 8 of its 11 career starts... a Horse with a 72.7 Winning Percentage - are you kidding me? The Short Odds on offer are the only reason people will punt on other horses. This quote from trainer Bart Cummings suggests it looks like a good thing too... "You couldn't find a nicer-looking horse if you went for all your life, I'd say."

5. ILLUSTRIOUS BLUE - $40.50
If this horse was actually blue - I'd consider it, but right now that's just false advertising.

6. MR MEDICI - $50.90
Whoever named this horse really missed the boat... if you're going with Medici why not call it Dr?

8. AMERICAIN - $12.50
Tempting considering it has four straight wins heading into the Cup. Will be in the mix according to Laurie Daley for sure.

12. HARRIS TWEED - $19.30
My tip for the Melbourne Cup... well other than So You Think. Something about the Black & Red Stripe Tweed jacket that the jockey will be wearing makes it a sure thing to at least feature in a place - although distance may be an issue.

13. MANIGHAR - $22.70
Sounds like it was named after a character in the Lion King... some sections of the crowd may be roaring for it to get up.

14. MASTER O'REILLY - $74.10
Old Greybeard is back for another tilt... the price suggests retirement would be a good idea right after the race.

15. MONACO COUNSUL - $36.10
For a second I thought the owners had named it after a biscuit but someone informed me that no, that's the Monte Carlo... devastated.

16. PROFOUND BEAUTY - $37.90
Really? This horse is that good looking - better ask Bart for his opinion first.

18. BAUER - Scratched
Finished 2nd in 2008 but has been scratched on the morning of the race.

20. PRECEDENCE - $22.60
Two wins in the last month allows me to let this name pass given its history. Note: Blake Shinn was injured in early race at Flemington and will not ride the horse.

21. RED RULER - $107.70
I always stuck with the wood finish rulers at school myself... didn't care much for the fluro plastic versions so will avoid big Red here - especially given the jockey won't be wearing any red at all!

22. LINTON - $67.40
Why couldn't it be called Lleyton or Lipton - those names I can use, what can you do with Linton outside of using it as a collective name for the stuff that gathers in your belly button?

24. MALUCKYDAY - $11.80
A good mate likes this horse today... he's normally not far off the pace when it comes to tipping a winner apparently so it makes my Trifecta - the fact it has won three straight races coming in helps too. 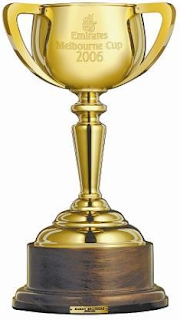 Note: As it turned out we tipped you 4 of the first 6 finishers... not bad, not bad at all.

If you plan on punting please be smart about it... after all it is only one race and I'm sure you can spend your hard earned on things that actually matter in the future - it's not worth ruining Christmas for a horse race.
Seeya next year with another stab in the dark.
By W D Nicolson