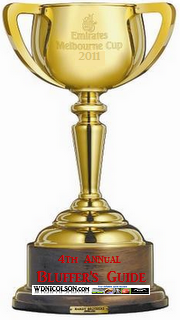 Welcome to the 4th Annual 'Bluffer's Guide to the Melbourne Cup'.

And for the fourth straight year - we guarantee at the very least a placing from our cutting edge predictions.

So we offer you moderately decent selections, or at the very least; an entertaining read.

Truth be told the latter reasoning is how the 'Bluffer's Guide' came about in 2008 and if you are looking for an insightful form guide to the actual ability of the horses in the Melbourne Cup Field, look elsewhere.

Actually that's a little harsh, given our record (mentioned and linked 2008 2009 2010), but if you're about to spend ridiculous amounts of money on the punt - this is not the guide for you.

Or maybe it is. Because honestly - you're guess is as good as the rest of ours when it comes to Melbourne Cup day.

As we stress here on www.wdnicolson.com every year, think long and hard about what you could spend (or save) the excessive money you punt with on Melbourne Cup day - because the odds are never in your favour.

Anyhoo, to the Bluffer's Guide for another year and each horse has its current Sportingbet prices listed  next to the horse's name and then you can read the Scouting Report. Note: the field will be cut down on Saturday October 29 and horse/jockey colours will be added Monday.

Now all horses are listed in barrier order... 1 through 24, actual horse number is next to the name.
(Those horses listed below the field were scouted prior to the final field being culled)

BLUFFER'S GUIDE TO THE 2011 MELBOURNE CUP

AMERICAIN #15 @ $4.80
Won it last year, storming home. Because there are a thousand horses still eligible for the final field I'm just inserting last year's 'Bluffer's Guide' on Americain... which when you think of the time it took me to write that reasoning, I just could have come up with a new scouting report. So simply put - superb run last year, the trainer's name is outstanding (Alain de Royer Dupre) and the horse can certainly repeat.

JUKEBOX JURY #6 @ $12
This is a horse that knows how to win, all you need to do is give it a bash on the side down the straight and it'll romp home. Ayyyy...

DUNADEN #13 @ $7.50
Is currently second favourite behind AMERICAIN and although it might be a dyslexic take on a Lord of the Rings reference... wait, have to stop myself there, didn't spell dislexic right the first time. Thank you Google Chrome for the auto spell check, and google for telling me the condition may in fact be dyslexic dysgraphia instead. Who knew? Big chance.

GLASS HARMONIUM #23 @ $35
I'm not 100% sure what a harmonium is exactly but if this horse wins the Cup - the owners will be able to buy a one of the gold variety with the winnings.

MANIGHAR #21 @ $41
Got nothing, but in my defence I am 21 horses in and I was bound to hit a roadblock at some stage. (Turns out the horse ran last year - "Sounds like it was named after a character in the Lion King... some sections of the crowd may be roaring for it to get up." - it didn't.)

FOX HUNT #19 @ $31
Something tells me this horse might be better suited to the English Countryside...

LUCAS CRANACH #11 @ $10
Fairly short odds for 'The Nudist'. A quick google search will leave no doubt what this renaissance painter like to paint, or more accurately what he didn't paint. Given the horse races practically nude, it should be in its element.

PRECEDENCE #2 @ $35
Looking at the actual form this horse gives you no previous reasons to think it might actually win.

HAWK ISLAND #18 @ $101
Since when is a horse going to be any good coming from an island populated mostly with hawks?

MODUN #5 @ $21
If Rugby League supercoach Jack Gibson was still with us, he'd wrap up a Modun victory with "Played strong, Modun good." PS. A Jack Gibson book is now available by Andrew Webster, I would like a copy.

AT FIRST SIGHT #10 @ $15
Still haven't seen this horse in the flesh so it is hard to tell you whether I'm impressed or not, if you're at the track I guess you'll have a better chance at being impressed with its chances.

MOYENNE CORNICHE #17 @ $26
If the sun is out this horse might struggle... it's a bit pasty. Or if you don't like the Cornish pastie reference... this is lovely with a tossed salad on a hot summer's day. (Hello Quiche lovers, no you don't get left out.)

SHAMROCKER #24 @ $51
Sounds like it is the next new utensil sensation from the Sham-Wow guy... http://www.youtube.com/watch?v=QwRISkyV_B8 - Quick Question - do you have one?

THE VERMINATOR #4 @ $126
Something tells me the owners of this horse enjoyed the American Pie movie series... which in other 'movie news' is coming back for another instalment. And to think they almost finished that series with some class with the wedding one... I said almost.

TULLAMORE #12 @ $21
This horse has an Irish Festival held in its honour in western New South Wales over the Easter Weekend every year... So it might get lucky and snag a place. 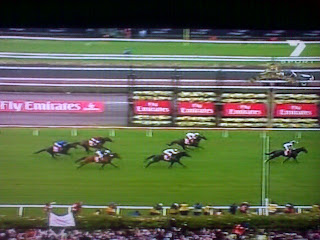 HORSES that didn't get a run in the final field...

ANUDJAWUN $201
Another one you could back and lose your money on... get it Anud-ja-wun... phonetics people.

BAUER $15
Came 2nd in a close one in 2008 and is back for another crack at the Cup. We referenced 24's Jack Bauer in the 2008 'Bluffer's Guide' and beyond the ice hockey gear manufacturer - those references will have to do for now. Decent price.

BOOMING $71
At $71 it is hard to imagine the market will be booming with interest for this horse.

GALIZANI $71
Wasn't he the Mayor of New York City at some point?

IRONSTEIN $201
Oh I get it... pity the theory of relativity suggests this horse at $201 is utterly no hope.

LAMASERY $151
Sadly there is no truth to the rumour that 'His Holiness' will be riding on Tuesday...

MACEDONIAN $51
Wouldn't it be great if the jockey riding this horse was called Alexander?

MIDAS TOUCH $21
If it wins (and at $21 it very well could) then the PA system better be blaring Stan Bush's 1985 smash hit 'The Touch' throughout the celebrations. http://www.youtube.com/watch?v=AZKpByV5764 (Do it)

MIDNIGHT MARTINI $101
Did you hear that they are in fact making a 3rd James Bond movie with Daniel Craig? Not that it has much to do with the chances of the horse in question - but given the name, I thought it was more interesting to tell you that than to try and talk up a $101 shot.

RAFFELLO $351
I hear he's the new 'Hulk' for 'The Avengers' movie... Eric Bana and Edward Norton are not losing any sleep over losing this role. You shouldn't lose any money betting on a $351 shot either.

REPRISAL $351
Not going to happen this, or any other time. Nothing to fear here.

SHEWAN $71
Is she a she and will she win? Answer is no to both questions.

SHOWCAUSE $201
At $201 you'd have to be extremely convincing to show any cause that this horse should be backed.

SPECHENKA $301
Richie Benaud would enjoy saying this name as it races down the straight... but that straight won't be at Flemington if the horse is $301 - as that means it is long odds to even get a run. Marvellous.

TANBY $51
Actually running pretty well of late but will not feature. Went with actual form because I can't find a reference worthwhile. Considered a Ryan Tandy angle but didn't want to concede a penalty right in front after knocking on with my first touch from the kick-off.

TWO FOR TEA $401
The Melbourne Cup is run at 3pm on Tuesday, just about the time for afternoon tea and this horse will be available to partake in the latter, because at $401 it will not be running in the former.

WESTERN SYMBOL $201
The final horse alphabetically and 45 horses later I'm done. No love for The Artist Formerly Known As Prince, see I actually managed something even when it looked like I was out of references.

So after that mishmash of referential wit, what are your Melbourne Cup selections?
Comment below.
By W D Nicolson