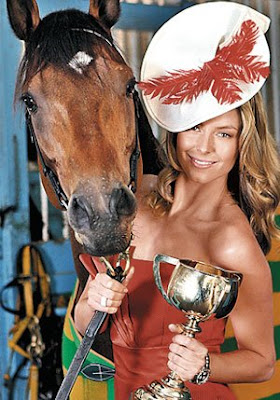 Horses, Money and Fashion mean everything on Melbourne Cup Day - and not necessarily in that order.

Well ladies and gentlemen of the blogosphere jury – those of you who read all the way to the end of my blogs get an extra special shout out – it is the first Tuesday in November in Australia and that means one thing: Melbourne Cup Day.

For the uneducated it is the biggest horse race in the Australian calendar and is widely known as ‘The Race that Stops a Nation’ – because at around 3pm every place of work in the country stops productivity for a good half an hour to watch the race and plan their revenge on the winning staffer who won the Cup Sweep through dumb luck rather than any form of skill in selection.

Generally the wager is a gold coin per entrant but even still when you pull out the horse called Neverinwithachance who is listed at 500/1 and the guy sitting next to you Frederick Huggles (the World of Warcraft geek who wouldn’t know a real horse name but could name all 450 sub-breeds sired by his mighty steed Buttercup from the computer game) plucks out the raging hot favourite ala Makybe Diva for 3 straight years – you can feel aggrieved at your misfortune. Especially when Neverinwithachance is scratched at the gate because the Race Caller complained his name was too long to say and thus required him to breathe whilst calling the race.

Anyhoo – personally I will have no financial interest in this race for a host of reasons and the main one comes in the form of the following form guide to the runners and as you’ll see – my strategy involves taking the best name available over any kind of actual historical form.

But here’s the Form Guide in numerical order (not barrier order):

So to the Trifecta for the 2008 Melbourne Cup.
1. Barbaricus – at about $15-20 bucks for the win at the moment – don’t say I didn’t tip you off if he wins.
2. Bauer – Never count Jack out.
3. Littorio – So rich and creamy, blended to perfection with a perfect froth make Littorio Coffee the choice for me. Wait I’m not endorsing a product in my blog am I?

Roughie – Varevees – as I said earlier if the race becomes a bloodbath my money’s on the machete wielding murderer!

Well there you have it for another year punters and people who spend their lunchtime reading websites to try and bone up on the horses so they can sound like an expert later in the arvo. 2008 will be the year of the Barbarian!