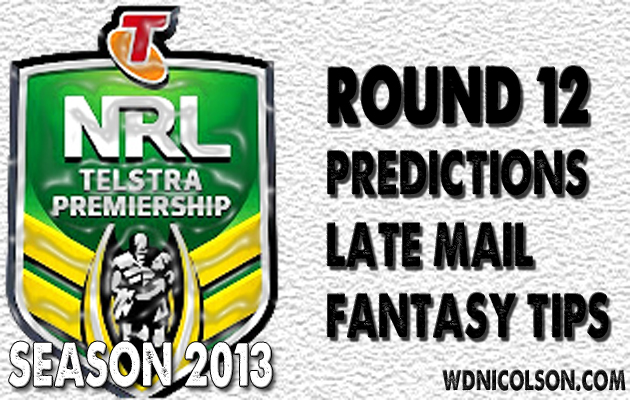 The NSW and QLD Game 1 Teams are here
In case you haven't heard - NOT The Footy Show is reuniting for a one-off State of Origin Preview Special this Friday night May 31st.
The hour long Podcast will be available on iTunes and on our YouTube channel (but will be audio) sometime Saturday afternoon June 1st.
If you'd like to take part see this post on our Facebook Page.

Continue reading below for the Round 12 Tipping Preview.

A great time of year for all... yes even NSW fans. We might not have tasted Origin Series success since 2005 (for Queenslanders I'll do the math for you: 7 series wins in a row) but every year when late May rolls around Cockroaches get optimistic... and the better news is that Laurie Daley actually picked a good side this year - with points in them!

Admittedly Mal Meninga did the same with QLD but the NSW 1-6-7-9 is the best it has been in years... if not since that 2005 Series when Joey Johns did the business with Anthony Minichiello in the #1, Trent Barrett in the #6 and Danny Buderus in the #9... you know - Hayne-Maloney-Pearce-Farah stacks up rather nicely... bar the whole Joey Johns factor. But for pure ability to create points - Hayne and Farah have Minichiello and Buderus covered deluxe...


Anyhoo - NOT The Footy Show's panel of 'experts' will have all those Origin 1 prognostications for you Saturday arvo via a Podcast but right now - let's look at the 8 teams in action for Round 12.

We're BACK!
Admittedly only for a State of Origin Special but after getting a lot of feedback that people had missed our combination of footy chat and I guess you'd call it 'analysis' - a few of your NOT The Footy Show regulars are reuniting on May 31st to produce an hour long podcast previewing Game 1 on June 5 at ANZ Stadium.
We are not returning full time, this is just a chance to talk some footy with old friends and hopefully - remind you all of what you've missed!
So keep an eye on @NRLTweet for more details, but we can confirm that DC Chapman, Jake Hauritz, Maria Tsialis, Nic McInerney and Matthew Duncan will join host Warrick Nicolson for a little more live-to-tape NOT The Footy Show fun.
The Origin 1 Podcast should be available on www.wdnicolson.com and iTunes during the afternonn of Saturday June 1st.

For our analysis of Tuesday team selections for Round 12 - click here.

The Postman has just one piece of NRL Dream Team and NRL Super Coach advice for you this week - enjoy scoring low due to 8 teams having a bye!

@NRLTweet Player of the Year
Voting Allocation for Round 12 of the NRL is below.

@NRLTweet's PREDICTION:
Canterbury send one player to Origin 1... and Josh Morris hasn't been a factor for them for almost a month (okay that might be two as Josh Reynolds is in the squad... just name your 17 already Laurie!). The Dragons send Trent Merrin who is arguably their biggest impact player and Brett Morris (who has been injured)... translation: The Dogs are almost full strength (if Reynolds plays) and the Dragons don't have their best player... I like the Dogs thank you very much. Ben Barba to remind everyone just how much better he is than Josh Dugan as well... Dogs by 10 points... but it could be 20.

LATEST OF LATE MAIL: Track via #NRLLateMail
BULLDOGS: Tony Williams will likely get another week or two off... the Dogs don't have their first bye til Round 16 - so they need to be cautious with him if his ankle is in a bad way. Josh Reynolds will miss this clash after finally getting chosen for Origin 1 on Thursday afternoon - Kris Keating looks set to come in at five-eighth.

LATE UPDATE? Will it be Keating or Joel Romelo people are asking? Romelo it is!
The Postman's DT/SC TIP: Good luck fielding a decent team this weekend!
DRAGONS: Matt Cooper wasn't named for the first time in the month he's missed (after being named) but now watch and see him actually play... go 55/45 he plays at this stage - Steve Price seems to love the cloak and dagger stuff... Matt Prior or Nathan Green would replace him in the centres if Cooper doesn't play, with Prior to the bench for Leeson Ah Mau if Cooper does.

LATE UPDATE? Cooper won't play, Dan Hunt is also out, with Will Matthews on the bench.
The Postman's DT/SC TIP: Good luck fielding a decent team this weekend!
If you have a DT/SC question grab The Postman on Twitter @NRLTweet and I'll answer there.

@NRLTweet's PREDICTION:
With John Sutton still a possible withdrawal (if Lewis withdraws by Friday) into the NSW team and now Sam Burgess suspended for a week - Souths look a little vulnerable. Until you look at the outs for the Knights: Gidley, Uate and Boyd. Newcastle get Jeremy Smith back but whoopdidoo... the Bunnies will miss Greg Inglis the most of their rep players but this game could turn on which supporting player adds to the work put forth by the two generals in Adam Reynolds for Souths and Jarrod Mullen for Newcastle. Both will have huge games and the packs aren't that far apart without South Sydney's Origin stars and Burgess. It's no slam dunk given Mullen's influence but I'll stick with the Bunnies by 8 points.

LATEST OF LATE MAIL: Track via #NRLLateMail
RABBITOHS: Sutton could still play if NSW even though they picked Reynolds for the open bench spot, but only if Luke Lewis is a scratching before Saturday. However at this stage consider Sutton playing for the Bunnies. Sam Burgess got a week for a weak crusher charge (hello Ben Smith did at least one just as bad if not worse in the Titans match) so along with their Origin players - Souths have some big outs.

LATE UPDATE? Sutton will play. The Bunnies won't name a replacement for Sam Burgess til Saturday.
The Postman's DT/SC TIP: Good luck fielding a decent team this weekend!
KNIGHTS: Gidley and Uate are going to miss significant time, and Boyd may not play in Round 13 let alone Origin 1. Expect the Knights to line up as named - Bennett hasn't been overly secretive about his injured brigade's replacements.

LATE UPDATE? Josh Mantellato will debut, pushing Peter Mata'utia back to the NSW Cup, while Matt Hilder replaces Adam Clydsdale on the bench.
The Postman's DT/SC TIP: Good luck fielding a decent team this weekend!
If you have a DT/SC question grab The Postman on Twitter @NRLTweet and I'll answer there.

@NRLTweet's PREDICTION:
The Titans flexed their rarely used offensive game plan and crushed Parra... the Cowboys had plenty of ball against the Tigers but didn't want to play to the conditions (then turned down a certain 2 points late) and got beat on the bell... each team got what they deserved for their game plan. Biggest question now is will John Cartwright let his team continue to attack? They won't have Nate Myles, Ashley Harrison or Greg Bird up front so Cartwright might get scared off playing an open game without his defensive mainstays - but he should just attack. I expect the Cowboys to throw caution to the wind if it is remotely dry - Neil Henry has to get a win and his current game plan has been lacking any kind of adaptability... I like Michael Morgan at five-eighth but I have to pick the Titans with their entire backline untouched by rep duty and the Cowboys missing Thurston, Tate and Bowen (to injury). Titans by 12 points.

LATEST OF LATE MAIL: Track via #NRLLateMail
TITANS: Luke O'Dwyer needs to get through training with his healed jaw to take his place, while Dave Taylor looks set to go after a week off to rest a calf strain. Ryan James continues to play with a groin problem while Matt Srama's finger is just good enough to play with.

LATE UPDATE? O'Dwyer is out, but Dave Taylor has made a quick recovery from a calf strain and will play, also Shane Gray will make his NRL debut.
The Postman's DT/SC TIP: Good luck fielding a decent team this weekend!
COWBOYS: That bench could be anything come kick-off... as always with the Cowboys - check the flight manifest out of Townsville!

LATE UPDATE? The Cowboys will give Ethan Lowe his debut.
The Postman's DT/SC TIP: Good luck fielding a decent team this weekend!
If you have a DT/SC question grab The Postman on Twitter @NRLTweet and I'll answer there.

@NRLTweet's PREDICTION:
The Warriors might have won last week and all that... but does anyone trust them away from home? Even against a Brisbane team without Origin stars in Hodges, Parker, Thaiday and Gillett (and Hannant who is injured)? Nup... sorry can't do it. They were okay against the Knights but the Knights were terrible and Brisbane do still have their spine in place... McCullough might have a field day around the rucks and Corey Norman is in good form. Truth be told main reason I'm picking Brisbane is because I don't trust the Warriors - even with this favourable matchup at Origin time. Brisbane by 7 points.

LATEST OF LATE MAIL: Track via #NRLLateMail
BRONCOS: It's unlikely we'll see Ben Hannant but you never know... it is a Monday game. That forward pack just doesn't look right does it?

LATE UPDATE? Mass positional changes. Wallace goes to hooker, McCullough to the backrow, Prince to halfback, Hunt to five-eighth, Reed in at centre, Whitchurch to the flank with Maranta and Kemp missing out.
The Postman's DT/SC TIP: Good luck fielding a decent team this weekend!
WARRIORS: Matt Elliott has named Konrad Hurrell recently and then not played him - but he was very strong in NSW Cup last week so looks set to take his place. The bench will be finalised come the weekend but Todd Lowrie is probably going to get another week or two to heal his ribs. Jacob Lillyman may yet start for Russell Packer given it is his 150th game.

LATE UPDATE? Dominique Peyroux looks set to play, word is Pita Godinet misses.
The Postman's DT/SC TIP: Good luck fielding a decent team this weekend!
If you have a DT/SC question grab The Postman on Twitter @NRLTweet and I'll answer there.

What are your tips for Round 11?
Are you taking any advice from our Awesome Foursome panel this year?
Let us know by commenting below or replying on Twitter.