NRL 2013: Gould's memories of Daley should be first of many #Origin | Round 11 #NRLTweetPOTY Votes

COMPLETE SET: Gould's insight into Daley's Raiders needs to be first of many...
Round 11 News and Views and @NRLTweet Player of the Year Votes 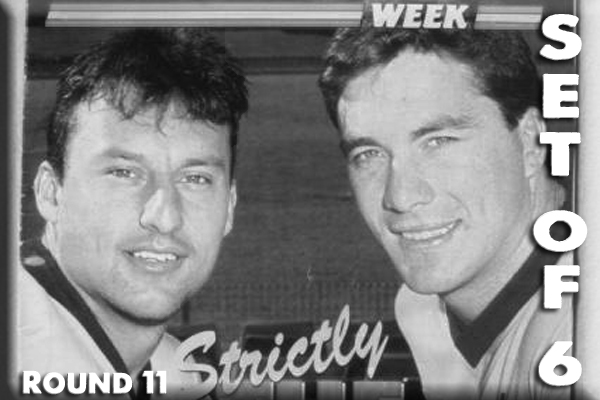 This is a regular feature on www.wdnicolson.com - every week we will post a Set of 6 Tackles that form a Complete Set by the end of the Round. It also features Votes from Round 11 of The @NRLTweet Player of the Year Awards. Let us know what you think of each topic via @NRLTweet

| ROUND 11 VOTES BELOW: The confirmed NSW and QLD Game 1 Teams are here |

How good was the Daley-Stuart combination?

It's Origin time and so Phil Gould penned this beauty in the Sun Herald yesterday... it is the third or fourth piece on NSW coach Laurie Daley focusing on him as a player rather than Daley the coach and nearly all of them have been compelling reading.

But Gould's is the best... like that's a surprise.

Take this line near the opening paragraph for instance.

"When Stuart threw the ball to Daley, people knew something great was about to happen."

Gould just gets it. After all he is quite often 'it' when it comes to Rugby League analysis.

What a lot of anti-Gould people seem to forget is the reason Gus has so many forthright opinions on the game is because he played first grade for years, coached at the first grade level from 1988 through 1999 and then continued his association as the NSW coach after his club retirement.

He is - quite rightly - considered NSW's best ever mentor at Origin level and perhaps (more than even Queenslanders like to admit) - gets Origin better than ANYONE on either side of the border.

But this isn't actually about Origin - though Daley will coach NSW for the first time Wednesday week.

This is about how incredibly well Gould captures the essence of the brilliance that emanated from the nation's capital during the club's golden period from the late 1980s through the mid-1990s... and the regard in which the great Laurie Daley was held by his opposition.

"I'm talking, of course, about the brilliant Canberra Raiders team of the late 1980s and '90s. There were so many champion players.

Glenn Lazarus: the best front-rower of that era.

Steve Walters: up until that point in time, the best hooker/forward I had seen.

Bradley Clyde: at that time many were suggesting he was the best player in the game.

Gary Belcher: a fullback before his time and to this day rates with me as one of the most influential fullbacks in the game I've seen.

And then there was this bloke called Laurie Daley."

@NRLTweet Player of the Year - Round 11
Votes from Round 11 so far are below.

What you've read to now is fairly well known Rugby League lore... the Raiders were a rather handy footy team for a long time, but then the true genius of Gould kicks in as you get into the meat of the feature.

"I first set eyes on Daley back in the 80s. I'd heard reports of this kid from Junee. The words "potential" and "champion" get thrown around far too often, but they always pique the interest. It makes you want to have a look for yourself.

At first glance their appeared nothing special about this youngster.

A wiry, spindly-looking kid with this high-combed mop of jet black hair, skinny ankles; and when he jogged his way out onto the field you would swear he was limping, so clunky was his gait. If he was a thoroughbred horse in the parade ring at the auction sales, I'd suggest he would've been passed in without a bid. But looks can be deceiving.

That first impression soon evaporated once Daley got the ball. He was simply dynamic. In all the years I've watched rugby league, I don't think I've seen too many more powerful, aggressive, explosive and elusive ball runners. He had great passing and playmaking ability, but he was far more dangerous when he held onto the ball and ran it himself. He was one of the most influential players of his time.

I once told him that when coaching teams against him, I was actually relieved when he passed the ball to someone else. I said: "We are some chance of containing them. With you though, I'm never so sure."

As a rival football coach, the two players in the game I feared playing against the most were Allan Langer and Daley. I don't know how many trees had to be cut down in the forest to make the paper I used writing notes and tip sheets on these two terrors, but I'm sure it would have been enough wood to build a small village. Daley scared the hell out of me.

His brilliant combination with Stuart had a little bit of yin and yang about it though. I always felt the best way to contain Daley was to try and get under the skin of his partner, Stuart. When teams I coached played against the Raiders I used to tell my players to target Stuart. Niggle him, argue with him, rag-doll him, wrestle him, knock him down after he kicks the ball, tackle him after he passes it, sledge him, laugh at him if he makes a mistake; getting him more interested in talking to us than doing his job.

With regards to Daley, I'd say: "Don't wake the giant."

Don't upset him, speak nicely to him, apologise if you tackle him and help him to his feet if you knock him down. The last thing I ever wanted was for Daley to get angry with us!

Stuart was smart the way he played to Daley too. He never gave the ball to Laurie until he thought it was time. Early in the game Stuart would bark at his forwards to get them rumbling over the advantage line. He would shape to pass long to Daley before slipping the ball back inside to a forward to make more ground. Late in the tackle count he would look towards Daley for the big spread of the ball, but then kick it deep down field and yell at his teammates to chase.

In fact he would starve his partner of the ball in the early stages of the game. Maybe he was protecting him from the opposition. Maybe Stuart was waiting to tire out the opposition a little before he went to his big guns. Maybe he was doing exactly what I was trying to get my team not to do - make Daley angry. Stuart would play away from Daley until Daley would start screaming for the ball.

But that moment in the game always came. "A looooong ball from Stuart to Daley…" And that's when things started to happen."

Now I was lucky enough to witness the greatness of the Canberra Raiders during my lifetime but it is always sensational to read how the great analysts of the game remember them... and more specifically how they remember coaching against them.

I could pen how I remember Daley and co. but right now it'd be foolish to try and match the way Gould just reminisced... so I'll end this Set with another paragraph of gold from the best analyst in Rugby League.

Gould finishes looking back at the 1992 series - the first for Daley as NSW skipper:

"Over the course of the next week I noticed that everywhere Laurie went, the other players went too. Wherever he sat in a room, a bar or a restaurant, other players gravitated towards him. On the few occasions he spoke, his teammates never took their eyes off him. They listened. I remember saying to our team manager Geoff Carr: "We've got the right skipper here."

Daley's leadership, though, was never more evident than on game day. He led from the front, by example, in attack and defence. He was a courageous, tenacious and passionate leader. When a big play was needed, he came up with it. He inspired those around him with his actions. Daley was a powerful force.

NSW won that series in 1992. They went on to win the next two Origin shields in '93 and '94 for good measure, to become the first NSW team ever to win three Origin series in a row. There were many great players in those NSW teams; but all of them, including the coach, would testify that Daley was the man.

Over the past few months, people in the streets, passionate NSW supporters all of them, ask me if Daley will be OK as NSW coach this year.

Simply put that's a fantastic read from the best writer in the game, and exactly why I'd love to see Phil Gould put more of these stories and views of the great players into a book (or a series of books).

Personally I can't get enough of this stuff... it is pure gold and a resource the kids of today should have access to. Because for all the greatness of Greg Inglis, Cameron Smith and Johnathan Thurston today - there have been players who were just as great come before them... and not that long ago.

Would you like to see a book on champions from Gus Gould? Do you remember Daley this way?

This week's Complete Set of Six is just Gould's insight and the @NRLTweet Player of the Year Award Votes from Round 11.

The confirmed NSW and probable QLD Game 1 Teams are here

11TH COMPLETE SET:
Round 11 - Gould's insight takes the lead.
A tip of the hat to the SMH's 'Set of 6' and Andy Wilson's 'Set of 6' for the name, as Complete Set just doesn't roll off the tongue quite as well, and we'll call it flattery that you've already used it.
CURRENT NRL LADDER

@NRLTweet Player of the Year Award
Round 11 Votes

This is how the votes were handed out for Round 11.