Check out the Round 11 Tipping Preview below...

19/05 Odds are courtesy of Sportingbet Australia 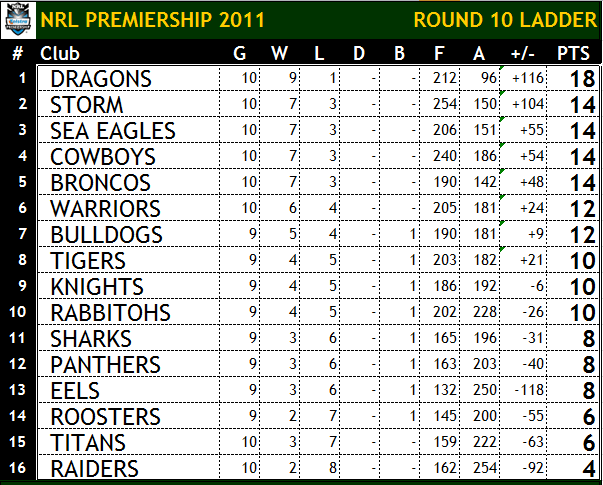 THE NRL TWEET's ROUND 11 PREVIEW

Welcome to Season 2011... after an off-season that often feels longer (or shorter - depends if you like cricket or not) than it is - the footy is back. Here on www.wdnicolson.com we've got all the Tuesday Team News, Wednesday Previews and Friday Late Mail that will keep your Tipping and Fantasy habit well fed. This preview integrates our NRL Injured List - which if you haven't bookmarked by now - I suggest you do so.

Well well well the Raiders can play attacking footy after all... but can David Furner leave the shackles off for a 2nd straight week? That's doubtful and without Josh Dugan against a barely touched by representative duties Canterbury outfit - Canberra just don't look like they can run with the Doggies. Take Canterbury on the road but have faith in the Raiders if you think Furner lets them play footy again.
Tipping + Fantasy Late Mail...
SMH + Other Late Mail 20/05 - Danny Galea is out with a hamstring strain and Joe Picker returns from an ankle injury to start in his place. Jarrod Croker's hip is giving him some grief but should play. The Bulldogs should be 1-17 with NSW 18th Man Jamal Idris a definite starter.
The NRL Tweet's Tip...

WTG: McKinnon, Brown, Ayshford, Moltzen, Utai, Marshall, Lui, Fifita, Farah (c), Galloway, Dwyer, Fulton, Heighington. Bench: Ryan, A Schirnack, Murdoch-Masila, Woods, Gibbs.
[Team Changes - There is only one addition to the Tigers team that was torn apart by the Rabbitohs last Saturday night with prop Bryce Gibbs coming back from an foot injury on the bench. Simon Dwyer picked up his own ankle injury against Souths but should play. ]

PEN: Coote, Simmons, Tighe, Purtell, Earl, Burns, Walsh, Grant, Kingston, McKendry, Waterhouse, Plum, Lewis (c). Bench: Weston, Bell, Y Gordon, Smith, Iosefa.
[Team Changes - The club has been rocked by the loss of Michael Gordon (knee) and Timana Tahu (pectoral) for the season and lose skipper Petero Civoniceva to QLD. Luke Lewis however didn't get picked for NSW which is a bonus and Lachlan Coote returns from injury at fullback and Sandor Earl comes onto the wing. Tim Grant hurt his hammy in the warm up last Friday and is touch and go here despite being named to start. Matthew Bell and Masada Iosefa come on to the bench as Nafe Seluini misses out. ]
Wednesday Game Preview...

Which Wests Tigers team turns up this week? The one that blew the Raiders off the park before the bye or the one that capitulated meekly to the Rabbitohs after the bye? The Panthers played great on Friday to beat the Broncos but lost Petero Civoniceva and Michael Jennings to Origin and are now without Michael Gordon and Timana Tahu for the rest of the season due to injury. The Tigers have no Origin players in Game 1 - so they have no excuses and will win well at Campbelltown.
Tipping + Fantasy Late Mail...
SMH + Other Late Mail 20/05 - The Tigers should have Bryce Gibbs back from a toe injury after he got through a training run. Alan Schirnack or Ben Murdoch-Masila will likely miss out. The Panthers will leave Masada Iosefa off their bench.
The NRL Tweet's Tip...

The Warriors are coming off their 4th straight victory and although they didn't put in a complete performance to beat the Knights - they won the game with their goal-line defence in the 2nd half. The Bunnies beat the Tigers with a superb game plan by coach John Lang and Issac Luke executed it beautifully. Unfortunately for the Rabbitohs the Warriors pack won't take it as lightly on them as the Tigers did - so you pick the Warriors to make it 5 straight at home.
Tipping + Fantasy Late Mail...
SMH + Other Late Mail 20/05 - The Warriors will make a final decision on their bench on game-day, while the Bunnies may be without Fetuli Talanoa who is battling the flu - youngster James Roberts may replace him if the club is satisfied he has served enough penance for his disciplinary breach a week ago.
The NRL Tweet's Tip...

NEW: McDonnell, McManus, Sa'u, W Naiqama, Lulia, Henry, Mullen (c), Fa'aoso, Hilder, Tuimavave, Houston, Costigan, Edwards. Bench: De Gois, Taufua, Filipo, Tolar, Kaufusi.
[Team Changes - With Akuila Uate on NSW duty - Keith Lulia comes onto the wing. Beau Henry returns from a leg injury and forces fellow rookie Tyrone Roberts out of the squad. Isaac De Gois is named to return from an arm injury on the bench. After being a curious omission on Sunday against the Warriors - Cory Paterson failed to be named again. He has been told to explore other options for 2012. ]
Wednesday Game Preview...

Having been stung by the Roosters on more than one occasion this season (again last week against the Sharks) I can no longer give them the benefit of the doubt and think that Newcastle showed enough variety with the footy against the Warriors to suggest they can beat an under-strength Sydney team at the SFS. Todd Carney was good in his return and is the visitors biggest concern but Jarrod Mullen is going very well and the Knights look stronger up front. Knights for me.
Tipping + Fantasy Late Mail...
SMH + Other Late Mail 20/05 - Jason Ryles should return from a hamstring injury but the bench is still yet to be finalised. The Knights may be without Junior Sa'u (ankle) and Shannon McDonnell (shoulder) with Kevin Naiqama and Peter Mata'uita on standby.
The NRL Tweet's Tip...

PAR: Hayne, Burt, Morgan, Loko, Atkins, Mortimer, Robson, Shackleton, McGuire, MoiMoi, Hindmarsh (c), Lasalo, Smith. Bench: Rogers, Webb, Allgood, Horo.
[Team Changes - Jarryd Hayne is available after missing NSW selection - as is Nathan Hindmarsh. Bad news for the players but a massive boost for the Eels. Tim Mannah is in the Blues team and Shane Shackleton starts for him with Carl Webb being added to the bench. Joel Reddy has a possible pectoral tear and has been replaced by Ryan Morgan who returns from an ankle injury suffered in Round 4. ]

If the Eels cannot win with a snubbed Jarryd Hayne and what must be a clearly perplexed Nathan Hindmarsh playing for their club instead of NSW - then Parra cannot enter any game for the rest of this year with the favourites tag. Cronulla don't have Nathan Gardner, Jeremy Smith, Kade Snowden or Paul Gallen so you have to pick the Eels at home. Hayne should carve up - just like he did last week against the Cowboys before his team-mates stopped tackling.
Tipping + Fantasy Late Mail...
SMH + Other Late Mail 20/05 - The Eels should be 1-17 and the Sharks may yet give young backrower Tyson Frizell his debut off the bench.
The NRL Tweet's Tip...

Stats courtesy of the great website RUGBYLEAGUEPROJECT.ORG
Head to Head Last 10...
MAROONS 7 BLUES 3 - The Maroons won the 2010 Series 3-0 and have won 7 of the last 8 games dating back to Game 2 of the 2008 Series. The Blues are therefore struggling big time...
Tuesday Team News...

NRL TWEET PLAYER OF THE YEAR VOTES
AFTER ROUND 10 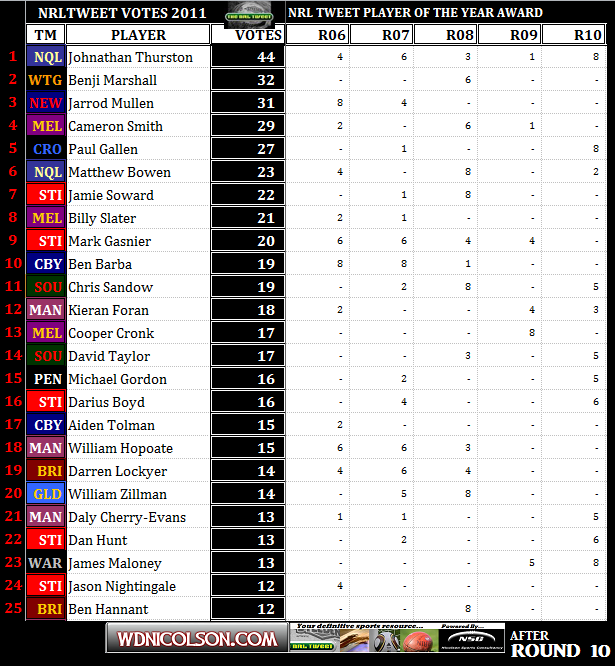 This year not only do you get The NRL Tweet's Tips each week but the whole NOT The Footy Show team will have their picks listed by Thursday so you can back a smoky or a favourite by seeing who we all picked (or didn't pick). Truthfully there is no perfect formula but here's a vital tip to help you cope with the copious amounts of NRL Tipping Comp's you are already in - PICK ON TUESDAY and enter your tips into all the sites no later than Wednesday. The reason for this is you can A. There is nothing worse than trying to cram your picks in late on a Friday afternoon and B. If you pick on Tuesday you can always change your mind and you would have given the Round some thought before Friday 7:29pm.

NOT THE FOOTY SHOW's EXPERT TIPS:
ROUND 11 SELECTIONS

]-[ It's not too late to join our Tipping Competition as long as you're already signed up for Tipping on the Daily Telegraph Website. We use that site because their overall prize is pretty good and you'll be on there for Super Coach anyway. Our League Code is 446386 and you can invite as many people as you want to take on the boys and girls from NOT The Footy Show.
1st Prize is an Official Steeden Match ball.
Fantasy League Phase 2 is underway...
Phase 3 Begins in NRL Round 19 - your final chance to win some Rugby League Clothing.
As an added bonus - here is a Fantasy League BYE Week Cheat Sheet. Especially for the NRL Dream Team, Super Coach or Fantasy NRL minded crew.