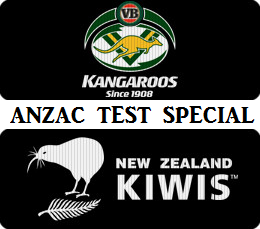 POST-GAME SUMMARY - GAME STATS
In a good game of Test Match footy, Australia outlasted the Kiwis over the 80 minutes and finished deserved 10 point winners at Skilled Park on the Gold Coast. Paul Gallen, Justin Hodges, Billy Slater and Matthew Scott were the outstanding players for the Kangaroos, while Ben Matulino, Lewis Brown and Simon Mannering were New Zealand's best.
Australia had a 10-6 lead at halftime after tries from Billy Slater and Jharal Yow Yeh were answered by a try to Matt Duffie. The game see-sawed after the break but tries to Slater and Jamal Idris late in the second half put the Kangaroos into a match winning position, before a late Lance Hohaia try saw the scoreline finish 20-10.
Need to give the English Referee Richard Silverwood a wrap for easily the best performance by a man in the middle in any game this season. Case in point the first penalty of the night came in the 54th minute and barely a decision before then had warranted blowing one - which is a credit to a referee for letting the game flow.
Player Ratings to Come...
Below is the Preview...

Dave and Waz from NOT The Footy Show predict who the Australian and New Zealand selectors will pick for the May 6 ANZAC Test Match at Skilled Park on the Gold Coast.

Put your tips for the game in the comments below or on the YouTube Video page.

The Official AUSTRALIAN TEAM Named on May 1 is:

The Official NEW ZEALAND Team Named May 4 is...

Australia have their best attacking combination fit and in form with Slater, Lockyer, Thurston and Smith in the team. The forward pack should be keen to meet the Kiwis face to face and if they hold their own - the Kangaroos backline should win Australia the Test.
Tipping + Fantasy Late Mail...
SMH Late Mail 06/05 - Justin Hodges had back spasms late in the week, so Australia drafted in Willie Tonga as cover. Adam Blair is the man most in doubt for the Kiwis with Lewis Brown to play if Blair can't go.
The NRL Tweet's Tip...

KANGAROOS  To Win By 14 Points.

All our Podcasts are available for download at http://itunes.apple.com/au/podcast/not-the-footy-show-2010-nrl/id370905391
Join Our Facebook Page and the Tipping and Fantasy League details which are a footy lover's best friend during the regular season.
For more Rugby League Coverage check out http://www.wdnicolson.com, The NRL Tweet on Twitter or NOT The Footy Show on Facebook.
More Rugby League...