News Round Up:
If you think we've missed something worth linking - post it as a comment below and we'll put it up quick smart. 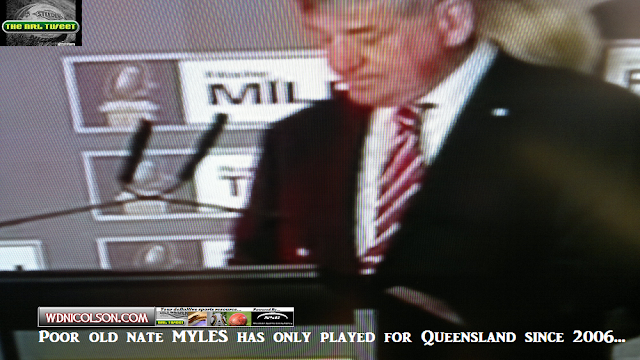 Queensland Named an 18 Man Squad on Tuesday - the typo on the fancy Player Name card for Nate Myles and the Songs played to intro each player the highlights.

FIRST THOUGHTS 1:15pm May 17:
No Greg Inglis or Justin Hodges - huge omissions for the Maroons.
Inglis was ruled out with a hip injury by his club doctor and Hodges tore his troublesome hammy on Friday Night - they have been replaced by veteran Willie Tonga and rookie Dane Nielsen from the Melbourne Storm.
Billy Slater is the fullback and Queensland made room for another gun #1 with Darius Boyd on the wing. Australian débutant Jharal Yow Yeh was also selected on the right wing.
Darren Lockyer is the five-eighth and skipper for his final Origin Series and is partnered in the halves by Johnathan Thurston who has been in wonderful form this year to lead the @NRLTweet Player of the Year Award by quite a margin after 10 rounds.
Ashley Harrison has quite rightly held the lock forward spot ahead of Dallas Johnson and Sam Thaiday and Nate Myles (or Nate MILES as this photo from the official team unveiling suggests) are in the second row.
Matthew Scott and Petero Civoniceva are easy choices to start in the front row with David Shillington unavailable through injury.
Cameron Smith is the hooker - no shocks there.
The bench is interesting however. Cooper Cronk keeps his utility spot ahead of Matthew Bowen and Ben Barba, but Corey Parker, Jacob Lillyman and Ben Hannant have pushed past 18th Man Dave Taylor and the omitted Neville Costigan to make the bench. Both Taylor and Costigan were on the bench for Queensland in last year's series.
So the sum up the Big SNUBS are: Taylor, Costigan and possibly Johnson. But in truth Queensland were pretty set coming into the naming of the team - only the bolter Dane Nielsen is a shock and when you consider how little there was to pick at centre for Queensland behind Inglis, Hodges and Tonga - no other player can feel hard done by missing out.

Jamal Idris named as NSW 18th Man - according to the @NRL Twitter Account (yes they used it!) Idris will be 18th Man and he will play for the Bulldogs on Friday Night however v Canberra and re-join NSW in camp on Saturday (confirmed by @NSWRL Twitter Account.

In The Sydney Morning Herald:

Queensland inadvertently release their Game 1 Team after Channel Seven cameras pick up QLD Coach Mal Meninga's team sheet. Brad Walter reports that Greg Inglis is OUT of the game and Storm centre Dane Nielsen is in line to replace him. Jacob Lillyman and Corey Parker make their returns to the Origin arena from the bench and it appears that the 18th man duties will be decided from Dave Taylor, Ben Barba and William Zillman. Check out the full scoop here.

Josh Dugan reveals to Chris Barrett he was an Origin certainty if fit as Coach Ricky Stuart was in contact with him weekly telling the Canberra fullback what he wanted from the 21 year old in this year's Series.

Penrith's Luke Lewis (despite missing out on Origin 1) endorses the coach picking the side he wanted. "I think it is great that the coach is the one who is picking the team, Ricky Stuart is the coach so he should be the one that chooses the team." Read more of Brad Walter's piece on the tough phone calls Ricky Stuart had to make here.

Glenn Jackson acts as a voice of the people as he tries to comprehend how NSW can do everything right in getting their Origin campaign back on track... until they left out Jarryd Hayne. 'NSW did everything right. Up until, that is, the first name that was read out in the new era of NSW rugby league.'

In The Daily Telegraph:

Matt Marshall and Andrew Webster report that not only are Greg Inglis and Justin Hodges out of Origin 1 - they could be out for the entire series. Souths CEO Shane Richardson on Inglis "There is no animosity at all. The medical report came back that he was not right and he could be gone for three to four weeks. It was a mutual decision for Greg not to play."

Paul Crawley quotes Blues débutant Dean Young on the secret that will lead New South Wales over Queensland "Everyone has to worry about their own job, that is the secret, that is what works at club footy and I think it works at rep footy, too."

Queensland are not only happy Jarryd Hayne isn't going up against them on Wednesday week but Assistant Coach Michael Hagan tells Barry Toohey that Jamal Idris being snubbed works for them as well. "We probably expected Idris would be in the side at left centre but no one in our camp will be too unhappy that he's not, Darren Lockyer, who defends on that side of the field, won't be unhappy, I'm sure."

NSW Skipper Paul Gallen tells Stuart Honeysett that the Blues won't be worried about Queensland this series... "One thing we've been caught up in the past few years _ certainly when I've been here _ is we worried too much about Queensland and worried about tactics to try to put them off the game and I don't think that's the answer.  Well, it hasn't been the answer."
Mulit-Media Coverage:
To Come...

Tweet Worth Reading:
Mark Riddell of the Sydney Roosters supports the NSW Blues but he (like a lot of NSW fans) are perplexed there wasn't room for Jarryd Hayne in Game 1.

What's Coming Up on Tuesday:

Queensland will name their Official Game 1 Team on Tuesday.
Keep checking back on the blog for any breaking news and multimedia reports released during the day.
For instant updates or to let us know of some content to add to the Blog - Follow us @NRLTweet

In case you missed our stand alone article on the the New South Wales Team as announced on Sunday - here it is.

FIRST THOUGHTS 5:15pm May 15:
Jarryd Hayne has been dudded.
Has more class than Ricky Stuart obviously knows what to do with in this football side... Josh Dugan has been given the keys to the car without earning it this year outside of his performance in the All Stars game back in February. It makes zero sense given what NSW have lacked in the last 5 years has been class to fight the known class of the Queensland team. Still I guess good luck Josh.
Todd Carney and Luke Lewis have also been dudded.
Hard to believe that they have missed out given they proved their fitness in Round 10. Michael Jennings (who I would have had there if I was picking the side) gets in despite missing Round 10 with injury... as did his centre partner Mark Gasnier (who Stuart said was picked ahead of Jamal Idris - who was later announced as 18th man). Doesn't make a great deal of sense why Jennings can make it but those two cannot. If they've played all year surely they are two of the first picked Ricky?
Brett Morris and Akuila Uate are the wingers with Stuart saying it would not have 'been fair' on Hayne or Dugan to play either out of position... geesh that doesn't work for Queensland with Darius Boyd now does it?
Jamie Soward gets the five-eighth spot but for how long? NSW have a history of dropping first game five-eighths so don't get too comfortable Jamie. Especially if Carney has a ripping next few weeks for the Roosters.
Halfback is Mitchell Pearce - no surprise there, despite his team's struggles. But he really isn't in great touch at the moment but Jarrod Mullen's cooled off himself to a degree the last few weeks - so it was always going to be Pearce.
Up front Aiden Tolman has been harshly omitted in favour of an injured Jason King - who again has been unable to play the past two weeks due to a rib injury. While King was there in Game 3 last year - a front rower with bad ribs might as well be wearing a target on his back. Interestingly Tom Learoyd-Lahrs was not picked due to a cheekbone injury and King was alongside Australian prop Kade Snowden.
At hooker 'mongrel types' Michael Ennis and Dean Young push ahead of Robbie Farah but there are no surprises there as NSW have shown they have no interest in picking class at dummy half since Game 2, 2009.
The backrow sees no room for Nathan Hindmarsh despite Ricky Stuart being quoted as saying Hindmarsh was everything he wanted when it came to Origin. Funny how Beau Scott got picked at right centre to contain Greg Inglis last year - didn't - and is now in a more important defensive role in the backrow. Scott is a great club defender but he was found out last year by Inglis. He's joined in the backrow by Greg Bird and captain Paul Gallen who had superb games in Origin 3 last year.
Trent Merrin is the new face alongside Tim Mannah and Young on the bench. Australia's starting second rower Ben Creagh is picked as a bench forward with no room for another shock non-selection Anthony Watmough.
Gallen is the lock and skipper, despite hurting his shoulder against the Roosters.
So the sum up the Big SNUBS are: Hayne, Carney, Lewis, Watmough, Hindmarsh, Idris and Learoyd-Lahrs.
What are your thoughts on the NSW Side for Game One?
Type them in the Comments below.

This website - www.wdnicolson.com - will produce a large amount of Origin centric content throughout the 2011 Series. So Bookmark this site if you haven't already.
NOT The Footy Show Produced the following NSW Blues Selection Special on May 7 - these were our teams, not a prediction of the side NSW would in fact pick.