Welcome to the most comprehensive and up to date NRL Injury and Suspension List available on the web.
We have sourced together a pre-season Injured List and will update it throughout the season. Our sources are Official NRL Clubs (click on a team name for their official injury list - but beware they are not always up to date), Mainstream Media (Including the outstanding Late Mail in the Sydney Morning Herald) and Weekly Game Observations.
Each Team's Injured/Suspended are split into 2 Categories:
DOUBTS - means a player could play this coming Round but don't be shocked if they don't (due to niggling injury or recent short term injury).
OUT - means a player is extremely unlikely to play this week or next week (due to long term injury/suspension).
NOTE: Players who are listed as 'DOUBTS' may have actually played the previous round but if they are still thought to be carrying an injury they will remain on the DOUBT list.
This Injury List will be updated regularly during each week of the season. This will be your best overview of who is unavailable in 2011 making it a invaluable Fantasy and Tipping Tool.
But if you want game-specific Late Mail every week, then check out our Round Previews Every Wednesday and are updated every Friday.
If we are missing any players on this list - please comment below or email this address.
Please Note - Due to Leave and a near non-existent internet connection at our location, the Injured List was not updated between April 17 and April 28.

BRI: Beale, Copley, Reed, Hodges, Yow Yeh, Lockyer (c)/Gillett, Wallace, McGuire, McCullough, Hannant, Glenn, Thaiday, Parker. Bench: Gillett/Norman, Hunt, Anderson, Te'o, Hala.
[Team Changes - The Broncos have regained Sam Thaiday from suspension but Darren Lockyer's cheekbone injury was deemed too great a risk and despite being named - the Broncos announced on Wednesday that the champion five-eighth will not play. Matt Gillett is expected to start at five-eighth with David Hala expected to beat out Corey Norman for a place on the bench. ]

CANTERBURY-BANKSTOWN BULLDOGS INJURED LIST - SEASON OVER. No updates til next year.
DOUBTS:

CRONULLA-SUTHERLAND SHARKS INJURED LIST - SEASON OVER. No updates til next year.
DOUBTS:

OUT:
None
ROUND 26 TEAM NOTES:

CRO: Gordon, Mills, Collis, Best, Williams, Kelly, Graham, Snowden, Morris, Douglas, Smith, Tupou, Gallen (c). Bench: Tagataese, Tautai, Aiton, Cordoba, Pomeroy.
[Team Changes - The Sharks have named Dean Collis at centre again despite him failing to play there against the Cowboys. Ben Pomeroy who replaced Collis has gone back to the bench. Taulima Tautai is the new face on the bench, while John Mannah is omitted. ]

GLD: Rankin, Michaels, Tonga, Toopi, Mead, Zillman, Campbell, Bailey (c), Srama, White, Laffranchi, Minichiello, Bird. Bench: Lawrence, Matthews, Thompson, O'Dwyer.
[Team Changes - The Titans cannot bring anyone new into their squad as they have been decimated with injuries. Clinton Toopi is named at centre again but he didn't last the whole match with the Tigers due to concussion, while Greg Bird's hand is badly broken. There are no changes to the 17 - but that's not necessarily by choice. ]

MAN: B Stewart, Robertson, Lyon (c), Matai, Hopoate, Foran, Cherry-Evans, Galuvao, Ballin, Kite, Watmough, T Williams, G Stewart. Bench: Rodney, Buhrer, Mauro, Rose, Lussick, Robinson.
[Team Changes - Manly finally get Glenn Stewart (and Darcy Lussick) back from month long suspensions stemming from the Storm game in Round 25. Glenn Stewart goes right back to lock for Shane Rodney who moves to the bench and Lussick joins Rodney there. The Sea Eagles are otherwise unchanged and it appears that two of Jamie Buhrer, Vic Mauro and Trent Robinson are most likely to miss out on a bench spot come Sunday. ]

NEW: Gidley (c), McManus, Sa'u, MacDougall, Uate, Stig, Mullen, Tuimavave, De Gois, Kaufusi, Houston, Costigan, Edwards. Bench: Southern, Tetevano, Fa'aoso, Taufua.
[Team Changes - The Knights have named Junior Sa'u to return from an ankle injury but Siuatonga Likiliki will be on standby if he fails a fitness test. Steven Southern is the new man on the bench with Matt Hilder not named on doctor's orders. Cameron Ciraldo has been omitted. ]

Michael Jennings (Shoulder - Not Named for RD26 - could play)

PEN: Coote, Simmons, Vaivai, Tighe, Purtell, Burns, Walsh, McKendry, Seluini, Bell, Smith, Plum, Lewis (c). Bench: Kingston, Weston, Grant, Austin.
[Team Changes - The Panthers have not named Petero Civoniceva or Trent Waterhouse (both knee injuries) but both could actually play. Luke Lewis is named to return from concussion, while youngster Blake Austin gets another crack at the big time on the bench. If Civoniceva and Waterhouse don't play then Matt Bell and Nathan Smith would start. ]

STI: Boyd, Morris, Gasnier, Cooper, Nightingale, Soward, Hornby (c), Hunt, Fien, Weyman, Scott, Creagh, Young. Bench: Green, Prior, Cuthbertson, Merrin, Rein.
[Team Changes - The Dragons will start Dean Young at lock on the team sheet this week after he replaced Matt Prior from the bench the last two games. Nathan Fien has been listed to start at hooker, with Mitch Rein moving back to the bench. Adam Cuthbertson seems to be fighting Jon Green or Rein for the final bench spot. The rest of the starting side is unchanged. ]

SOU: Merritt, Farrell, Corrigan, McQueen, Talanoa, Sutton, Sandow, Ross, Luke, McPherson, Pettybourne, Taylor, Crocker (c). Bench: L Burgess, Tyrrell, Clark, Peats, Roberts.
[Team Changes - The Bunnies lost Greg Inglis to a season ending ankle injury in the loss to the Broncos but can still make the Finals if they beat the Knights on Friday. Nathan Merritt and John Sutton return from injury, while Roy Asotasi could be a late inclusion. Chris McQueen goes to the centres, Fetuli Talanoa comes onto the wing and James Roberts is on an extended bench. Eddy Pettybourne's eye injury will be monitored during the week. ]

SYD: Minichiello, Perrett, J Carney, Leilua, Graham, Anasta (c), Pearce, Ryles, Friend, Tasi, Guerra, Cordner, Nu'uausala. Bench: Mitchell, Masoe, Takairangi, Arona, Waerea-Hargreaves.
[Team Changes - The Roosters have named Sam Perrett to return from an ankle injury and Jared Waerea-Hargreaves to return from suspension, while Shaun Kenny-Dowall (Groin) is the only omission from the team that beat the Eels in golden point. Frank-Paul Nu'uausala is named at lock, while Waerea-Hargreaves comes back on the bench. Joseph Leilua replaces Kenny-Dowall in the centres. ]

WTG: Moltzen, Ryan, Ayshford, Lawrence, Tuqiri, Marshall, Lui, Gibbs, Farah (c), Galloway, Fulton, Ellis, Heighington. Bench: Brown, Flanagan, Groat, Woods, Utai, Murdoch-Masila.
[Team Changes - The Tigers bring Chris Lawrence back from a hamstring strain for the second week in a row at the selection table but this time he is almost certain to play. Matt Utai shifts back to the bench alongside Mitch Brown - with one of the two to miss out come game day. Ben Murdoch-Masila is added to the extended bench at the expense of Wade McKinnon and Andrew Fifita - both of which failed to make the final bench against the Dragons. ]
|-| |-| |-|
If you play Fantasy League Games - Dream Team, Super Coach or Fantasy NRL - here is a Short Summary of the 2011 Byes. 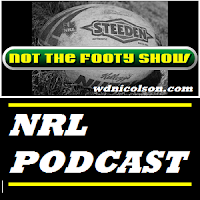 Catch NOT THE FOOTY SHOW in 2011 via our Weekly NRL Podcast via iTunes here.

Here is our Season Preview Video for 2011.
By W D Nicolson