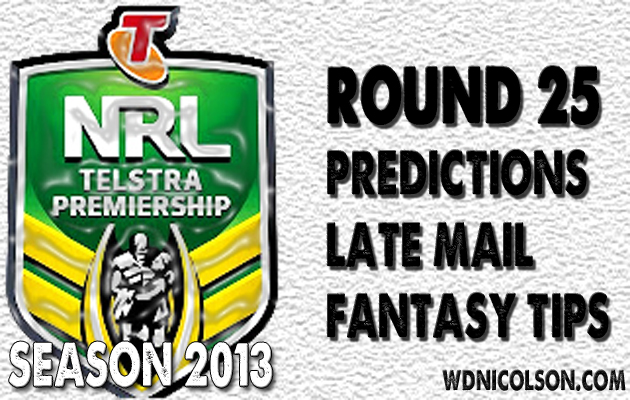 Not because every one of those 7 teams played like their playoff lives depended on it in Round 24 - but because by and large - they all stink.

The Knights, Titans, Raiders and Broncos all lost after entering Round 24 in 7th, 8th, 9th and 10th spot... meaning they win and they move themselves further away from the teams in 11th, 12th and 13th.

Those teams were the Cowboys, Panthers and Warriors... who all won.

Yet if the 13th placed Broncos beat the 7th placed Knights on Friday - it is possible that the Knights could still be in no worse than 8th spot and the Broncos will be no better than 9th.

The Cowboys, Titans and Panthers could all lose, leaving the Raiders-Warriors game effectively a playoff for a current spot in the Top 8 - regardless of who wins the Broncos-Knights clash.

Yet if the Cowboys, Panthers and Titans win... well you get the idea - the whole Top 8 makeup is all over the place.

Not because teams are playing particularly well (Cowboys aside - who are riding Johnathan Thurston as far as he can carry them) but because most of them can't string a few wins together than would secure them a playoff spot.

That all being said however - with the Sharks beating the Roosters to go into 5th - no team from 6th to 13th will trouble any of the Top 4 teams in September... but it'd be nice to at least get to play another game right?

Prove that to your fans this weekend teams 7 through 12...

Latest of Late Mail and Round 25 Tips below!

For our analysis of Tuesday team selections for Round 25 - click here.

The Postman remains alive in two of four NRL Dream Team Leagues and both his NRL Super Coach Leagues... though the odds of victory are heavily stacked towards the SC comps.

Voting Allocation for Round 25 of the NRL is below.

@NRLTweet's PREDICTION:
Newcastle win this they are going to play Finals... Brisbane win this and they may play Finals. The Knights play Parra in Round 26, so even if they lose here they probably still make it but for Brisbane they need these two points baaaaaaadly. Knights capable but no one is ever sure if they realise that every week... Brisbane at home.
Broncos by 2 points.

LATEST OF LATE MAIL:
BRONCOS - Glenn should return from his thumb injury, while you shouldn't rule out Wallace starting at halfback and Hunt going to the bench. Kahu is out with a quad strain, Maranta comes in on the wing.
KNIGHTS - Check to see if Smith and Gower travel, if so McKinnon probably drops to the bench and Costigan misses out entirely. Gidley could start, while if Gower plays - Roberts would miss out. Mason looks set to play.
PRE-GAME UPDATE? Kahu out, Maranta in. Gidley starts at halfback, Roberts to bench.

@NRLTweet's PREDICTION:
Farah comes back for Benji's 200th but it won't be enough... Inglis plays and Souths win by 30+, he doesn't and the Tigers might make a game of it in the first half... but Souths to win.
Rabbitohs by 30 points.

LATEST OF LATE MAIL:
TIGERS - Farah will almost certainly play, while there could be a late change on the bench. No Brooks though.
RABBITOHS - Inglis is the concern and may get rested up for Round 26 v the Roosters. Merritt would go to fullback and King would come onto the wing (or Hunt). Will Maguire start 3 Burgesses instead of 2? Asotasi to the pine makes sense with both George and Thomas named on the bench.
PRE-GAME UPDATE? Both teams 1-17 meaning Inglis is playing.

@NRLTweet's PREDICTION:
The Warriors stunk for the first 40 minutes before beating the Titans last weekend and Canberra just stink period. The Warriors had a game like this two weeks ago at home to the Panthers and stunk it up... then won on the road. Canberra have blown two home games in a row and now need to win on the road to stay alive... winner moves into the box seat for a Top 8 spot, loser has to rely on results deluxe in Round 26 to think they are still breathing. Go the home team.
Warriors by 7 points.

LATEST OF LATE MAIL:
WARRIORS - Nielsen is out, replaced by Laumape. Ropati may go into the centres.
RAIDERS - Edwards may start for Vaughan like last week but it looks like Learoyd-Lahrs might actually play this week... no he won't - TLL is out, McIlwrick onto bench. Campese is also likely. Ferguson will never play for the Raiders again...
PRE-GAME UPDATE? Ropati to centres, Laumape onto wing and Nielsen OUT. Learoyd-Lahrs OUT, replaced by McIlwrick on the bench.

@NRLTweet's PREDICTION:
Neither team can win the comp but the Dogs are set in the Top 8 and the Panthers need this win badly to think they'll play playoff footy. If Barba plays then the Dogs should win, if he doesn't then Penrith's up the middle then throw it out the back style might really give the Bulldogs a lot of trouble... I'll stick with the Dogs but they aren't a good footy team without their #1. Take Penrith if you need an upset in your tipping comp.
Bulldogs by 6 points.

LATEST OF LATE MAIL:
BULLDOGS - Barba has finally signed/transferred to the Broncos but remains an outside chance for this game. Burr gets a run with Taupau 18th man. Eastwood is the closest of the injured brigade outside of Barba to returning.
PANTHERS - Brad Tighe is named for NSW Cup but won't be rushed back for the NRL yet. Likely 1-17 with the Grant/Latimore swap before kickoff.
PRE-GAME UPDATE? Dogs 1-17, Latimore makes way for the returning Plum for Penrith.

@NRLTweet's PREDICTION:
Somehow this ends up on a Saturday night but that decision is made by higher paid people than you or me... not that they've got it right playing 3rd v 4th at 7:30pm on a Saturday two weeks before the Finals but anyhoo... the game itself loses some luster if Watmough does not play (he hasn't been named), while the Storm are getting into full gear right now and even though this is at Brookvale - the Manly pack sans Kite and Watmough looks a little outmatched. Melbourne to turn the screws.
Storm by 10 points.

LATEST OF LATE MAIL:
SEA EAGLES - Taufua has been stood down for the last two rounds for an off-field incident so expect Peta Hikuu to come in. Watmough may yet play if he feels up to it on gameday, while Kite is battling a pectoral issue that could be a real concern for the coming weeks. Symonds returns from a thumb injury, while Matai's hand should be okay to play - and Brett Stewart's hammy is likely to be okay as well.
STORM - Harris will come back in after getting a rest last week, while Proctor's knee may keep him out this week. In other news - Slade Griffin and Dayne Weston are done for the season.
PRE-GAME UPDATE? Kite is back, pushing Rose to the bench and Gower OUT. Hiku replaces the suspended Taufua on the wing. Storm 1-17.

@NRLTweet's PREDICTION:
Got dudded by the Sharks when these teams played in North Queensland a couple of months ago... in that I picked the Sharks and the Cowboys won easily. Now I don't know what to do... the Cows are playing as well as JT is getting them to now (which is remarkably good) and Cronulla just smashed the Roosters at The Tip. Have to stick with the home team but only because I refuse to believe the Cowboys are a playoff team...
Sharks by 7 points.

LATEST OF LATE MAIL:
SHARKS - Pomeroy escaped a 1 match ban at the Judiciary on Wednesday night, while Ryan's runs are likely to have run out by Sunday.
COWBOYS - Ashton Sims or Thorby will get the final bench spot.
PRE-GAME UPDATE? Carney surprisingly withdraws with a hamstring strain, Graham to five-eighth, Ross onto bench. Cowboys 1-17.

@NRLTweet's PREDICTION:
The Titans go into the game with 16 players... so there's that counting for the Roosters in this one... and the fact they got a fright and a half from the Sharks last start. Everything points to the Roosters ripping the Titans apart... Only way the Titans can stay in this is to throw the ball around and try and beat the Roosters with football... trying to go grind for grind with Easts undermanned will get them smashed.
Roosters by 26 points.

LATEST OF LATE MAIL:
ROOSTERS - Minichiello should return after being named with the game on Sunday.
TITANS - No word yet on who will be their final squad member - but Dowling and Bird remain in doubt with groin and back injuries respectively. Bailey should return from an ankle sprain... he has to! Mead joins the season ending injury list with a back fracture. The club is yet to confirm their 17th man... let alone their 16th with Mead out.
Update for Titans - Bird is playing, Gordon to fullback, Michaels and Atkins into the backline and Ioane will travel as 18th man. Dowling and Takairangi are still in doubt.
PRE-GAME UPDATE? Titans changes as expected, Roosters 1-17.

@NRLTweet's PREDICTION:
What a disappointing end to Monday Night Football for 2013... the Eels get Hayne back but have the rest of their roster so you have to pick the Dragons... who have a couple of good players and yet still pick Nathan Fien at halfback. If you were ever going to audition a player for next season - Round 25 and 26 are the games to do it. Picking Saints because well... no reason other than they may not suck quite as much as Parra do... even if Hayne is playing this week.
Dragons by 8 points.

LATEST OF LATE MAIL:
EELS - Hayne being named is encouraging but if he's not right there's no way he'll play injured. Mullaney would come in if he's ruled out. At some point Kelepi Tanginoa returns right?
DRAGONS - Will Drinkwater finally get a start? No idea... Price is in his own world sometimes with the makeup of his team. Expect changes nonetheless even if Drinkwater doesn't get a start.
PRE-GAME UPDATE? Hayne is apparently out, Mullaney is likely to take his place.

What are your tips for Round 25?
Let us know by commenting below or replying on Twitter.