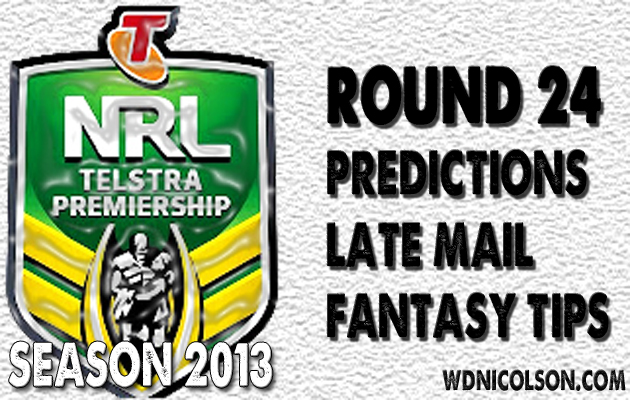 Crunch time... how will you pick from here on out?
| NRL LADDER |

If you are entering the final 3 weeks of your Tipping Season and have a sniff at the title... here's the rub:

2. If you are behind by 1 or 2 tips... PICK FAVOURITES and think about only one point of difference each week.

3. If you are 3 or more back... BACK THE SEMI-UNDERDOG as much as possible, because those above you are going to be taking the favourites.

And the final bit of advice - don't pick Parramatta.

There you go... victory is at hand!

Latest of Late Mail and Round 24 Tips below!

For our analysis of Tuesday team selections for Round 24 - click here.

The Postman took a week off with his NRL Dream Team and NRL Super Coach tips... and almost as a result my DT squad was cut to ribbons by injuries without trades to compensate so the one league I wanted to try and defend as champion in... I was bounced in the first week. The other 3 - still breathing despite no trades left.
Dominating the dojo in both SC comps however... plus I've got 1 trade left. Thursday I might have something for you.

Voting Allocation for Round 24 of the NRL is below.

@NRLTweet's PREDICTION:
The Penrith team I've watched the last two weeks confuses me... Brisbane with Prince in the #6 don't impress me and really haven't all year... so it pains me to pick the Panthers at home... again. They aren't a good team but they can play good footy every few weeks and Brisbane are a team that could be a real threat if they had a strike playmaker in the halves... but they don't. That said - Penrith had more to play for in Round 22 when they hosted the Cowboys than they did last week in New Zealand - and this week there's 'more to play for again' so they could well fall in a heap... Brisbane's pack is very good but Hoffman, Gillett and McCullough are their only real avenues to points: i.e. not their halves. Home team for me.
Panthers by 7 points.

LATEST OF LATE MAIL: Penrith look fairly settled now Moylan likely to stay as 18th man. Brisbane may squeeze Alex Glenn on the plane but he says he's another week away.
PRE-GAME UPDATE? Latimore starts, Grant to bench. Anderson in for Jarrod Wallace on bench.

@NRLTweet's PREDICTION:
Souths were good in the 2nd half against Manly but that game was over if Matai's try is rightly awarded... Reynolds played very well for the first time in weeks, while Sutton was so-so but at least a presence of some sort. They'll miss Burgess again (Sam that is) but the Dogs haven't been playing with any real desire of late and unless Barba suits up - the Bunnies should win this relatively comfortably. Plus GI is playing = that helps.
Rabbitohs by 13 points.

LATEST OF LATE MAIL: After winning last week Souths probably go in with the same 17 assuming Inglis is okay, Canterbury will start Jackson and bench Williams as per normal, but Burr may get a run ahead of Taupau or Browne come Friday. Oh and Barba might be back too... Lafai or Brown would miss out.
PRE-GAME UPDATE? Lowe to bench, Tom Burgess starts. Williams to bench, Jackson starts. Yes Inglis is playing, no Barba isn't.

@NRLTweet's PREDICTION:
Yep... here's the boldest pick of the year on www.wdnicolson.com:
Benji Marshall will win this game for the Tigers... and ride off into the distance once he hits 200 games for the club. I know he's struggling but the Dragons aren't going to recover well from blowing another game - this time to the Sharks - late because they can't score when they need to put someone away... and the Tigers... well they got royally parcelled up for Christmas by the Roosters but the Roosters are slightly better than the Dragons... Back Benji - because you don't want to be backing the Dragons.
Tigers by 2 points.

LATEST OF LATE MAIL: Dragons may shuffle two or eight positions around... Steve Price likes to do that to catch out opposition coaches... worked a treat so far this year right? The Tigers played Monday so they probably have a change or two in them... namely the possible return of Farah - who will have had a good break for his ouchie knuckle by this Saturday... no guarantee he plays though but the SCG/Benji's last 3 games thing looms as a plus. Sounds like Luke Brooks could debut at halfback with Anasta moving to lock or going to the bench... while Nathan Brown is a young prop who may also play.
Sounds like Brooks will start in the halves and Benji moves to... the centres? Thompson would miss out in all likelihood. While Sironen may finally be reinstated to the starting team for Anasta. Drinkwater a late inclusion? Not sure if Mr Price loves a late change?
PRE-GAME UPDATE?

@NRLTweet's PREDICTION:
Given Kelly's back and the Warriors choked deluxe at home with their playoff destiny about to be in their own hands.... take the Titans. If Bird withdraws with his back no good - only then will I lean back towards the Aucklanders. And lean back I have... TIP CHANGE!
Warriors by 4 points.

LATEST OF LATE MAIL: Gold Coast named Bird, Harrison and Kelly so they'll be given every chance - Bird the most in doubt after back spasms left him unable to walk last weekend. Bailey is another week away probably. The Warriors will likely play Ropati at right centre and Hurrell on the right wing, but otherwise should be unchanged.
Bird was ruled out on Friday... Zillman was sore after returning last week and is also out. Don comes onto the wing, Mead to fullback and Michaels onto the bench.
PRE-GAME UPDATE?

@NRLTweet's PREDICTION:
Got burned too many times this year by the Cowboys to be able to bring myself to pick them... so Knights it is. Gidley back at five-eighth is one step to making this pick look even tastier... the Cowboys are one bad start in a game from being the same old Cowboys I reckon... over to you Newcastle.
Knights by 1 point.

LATEST OF LATE MAIL: Cowboys are probably 1-17 with Lowe as 18th man. Newcastle may finally switch Gidley and Roberts, while check the airport to see if Mason travels. Smith will not play with a sternum injury.
Gower and Smith are OUT and Mason looks very unlikely, but Gidley may still start and move into hooker when Buderus goes off.
PRE-GAME UPDATE?

@NRLTweet's PREDICTION:
You want to believe the Raiders might actually have a dig this week with a new coach finally... but then you realise Manly are in town and you pick the visitors.
Sea Eagles by 4 points.

LATEST OF LATE MAIL: Canberra's new coach made his changes at the Tuesday team announcement... but don't rule Cornish out completely with Campese injured and the young halfback not named for NYC or NSW Cup. Then there's Ferguson... watch this space later in the week (Dunemann said on Thursday Ferguson will not play but...) - or check a Sutherland shire pub. Manly may add Tom Symonds to the travelling squad but the real question is just how injured is Anthony Watmough this week? Really?
Sounds like Brett Stewart may not make the trip to Canberra - so Peta Hiku likely gets the call. No update on Watmough yet, while Kite's wrist remains a concern.
PRE-GAME UPDATE?

@NRLTweet's PREDICTION:
Melbourne... don't make me write why - think of the Parra fans.
Storm by 26 points.

LATEST OF LATE MAIL: If Melbourne were going to rest anyone for a game at the end of the year - THIS IS IT. Beware the late change. Parramatta could have changes... Ricky likes changes.
PRE-GAME UPDATE?

@NRLTweet's PREDICTION:
I really really really really really like Cronulla for an upset here like they did earlier in the season when the Bunnies were on fire... but I can't do it. I'm light years behind Jake Hauritz in the tipping comp here on the website but I still can't pick against the Chooks - even though injuries and suspension mean the Cronulla pack should really take it to Easts on Monday. Sticking with the favourites...
Roosters by 2 points.

LATEST OF LATE MAIL: Cronulla expect to be 1-17 with Tagataese as 18th man. For the Roosters - Minichiello will either return at fullback forcing the three-quarter line shuffle or Langi will get a 2nd gig in the centres with Aubusson going to the pack. Either player would replace the now suspended O'Donnell.
PRE-GAME UPDATE?

What are your tips for Round 24?
Let us know by commenting below or replying on Twitter.