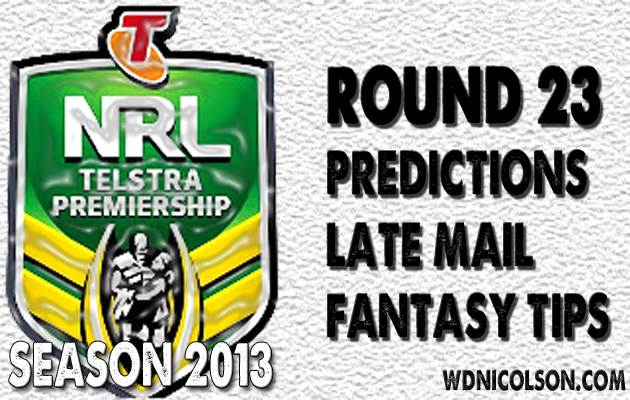 How did you survive?
| NRL LADDER |

For the first time this year www.wdnicolson.com was not the first place you could find the coming weekend's late mail on a Wednesday evening and judging by our research - you had to wait til Friday morning for anything resembling Late Mail.... note how it is usually Thursday?

I've done a trip to Dubbo and back for work and barely made it home last night before the flu (I acquired from my lovely nephews and nieces a few days ago) kicked in... so you are really lucky you are getting anything today (Friday) as I've got the shaky shakes deluxe.

It is a different 'quick hit' format below due to being pressed for time but normal service will resume for Round 24.

Latest of Late Mail and Round 23 Tips below!

For our analysis of Tuesday team selections for Round 23 - click here.

The Postman has to take a week off his NRL Dream Team and NRL Super Coach tips... I know the timing isn't great but he's been hit for 6 by the flue after a business trip to Dubbo.  You're lucky you are getting Tips and Late Mail!

Voting Allocation for Round 23 of the NRL is below.

@NRLTweet's PREDICTION:
Burgess is a gigantic loss to Souths - and we won't know until 6:45pm if Sutton is going to play either. Inglis will but is he enough of a force in his first game back from a knee injury to stop Manly's dynamic duo in the halves? Manly lose Watmough (or do they?) which is also a rather large subtraction but Manly's spine looks in better form right now so...
Sea Eagles by 7 points.

LATEST OF LATE MAIL: Inglis will play for Souths but Sutton is still not 100% confirmed - check the lineup an hour before the game. There's also a chance Walker might return and he could even come off the bench if Sutton misses out and Keary starts. Lima should also return. Manly might make Tom Symonds a late inclusion with the lack of Watmough, with Gower or Hasson missing out. STOP PRESS: Watmough is playing for Hasson. Sutton is also playing, while King drops out for Walker in the centres and Clark comes in for Lowe.

@NRLTweet's PREDICTION:
Just pick Brisbane and move on. By all means give Parra a chance if you want but Brisbane can't afford to lose and it was only the inclusion of Hayne that reminded Parra how to win.., against the Tigers.
Broncos by 14 points.

LATEST OF LATE MAIL: Brisbane have steadfastly claimed there will be 'no late changes' so Kahu plays for Drew and Stagg or Gillett will lineup in the centres. If they are truly 1-17 it means Anderson and J Wallace miss out. Parramatta may tweak things before kick-off but the squad is unlikely to have any new arrivals from the 19 named on Tuesday.
STOP PRESS: J Wallace comes in for Anderson/Slyney as final bench player.

@NRLTweet's PREDICTION:
Canberra lose and they prove they are a spent force as far as playoff footy is concerned (because they play the Warriors either next week or the week after who could have passed them by then). But the good news for Canberra is Canterbury aren't much chop without Ben Barba - duh! No Campese is an issue for the home team but Barba is a far bigger loss (as is Kasiano/Eastwood) for how Canterbury like to play and the Gold Coast showed that up on Monday night. Ummmmm....
Raiders by 4 points.

LATEST OF LATE MAIL: Learoyd-Lahrs was keen to play but like Campese, is out for the Raiders. Lahrs has strained his hamstring and will miss, while Williams (if his ankle is fine he'll play) will come in for Campese. Lee may also be a late inclusion to take advantage of Perrett's inability to catch a kick targeted at his wing or the forgotten Robinson might get recalled. Canterbury may shuffle things at kick-off again but it looks like the Morris at FB experiment continues for at least another week.

LATEST OF LATE MAIL: Doubt we'll see any changes for the Cowboys, while the Titans should get Zillman back for Dowling and check the flight records to see if there's another sneaky inclusion... ie Srama and one more.

@NRLTweet's PREDICTION:
Personally never find these games interesting... which is strange because Cronulla/Red V fans love it. I think it is stylistically neither play a game I like to watch. Gotta stick with the Sharks - even if Merrin and Dugan weren't hurt for the Dragons.
Sharks by 16 points.

LATEST OF LATE MAIL: With Nathan Fien announcing his retirement from the Dragons this week - will Josh Drinkwater get a crack at starting this week as Fien goes to the bench? Ryan and Tupou should return for the Sharks after being close last week, while Ross or Tagataese will miss out on the final bench spot. Graham wasn't listed but may yet play, while Fifita's status needs to be checked an hour before kick-off.

@NRLTweet's PREDICTION:
Pick the Warriors - especially if you saw any of what the Panthers dished up last week with their Top 8 hopes on the line against the Cowboys...
Warriors by 18 points.

LATEST OF LATE MAIL: Ropati is being talked up again as a key cog in the Warriors' finals run - so is this finally the week he comes in for Laumape and Hurrell goes to the wing? Packer may also be a late inclusion. Penrith may shuffle their lineup come kickoff with Coote and not John starting at five-eighth, while Segeyaro is likely to play off the bench this week.

@NRLTweet's PREDICTION:
Newcastle might put up a fight... they may even win. But you need to stick with the Storm - despite a win by the Knights being so key to their standing in the Top 8 improving. Can't pick Newcastle with the Big 3 playing.
Storm by 12 points.

LATEST OF LATE MAIL: McKinnon looks set to play for the Knights after getting through his NSW Cup warmup last week. Gower will probably miss out again. The Storm may bring Blair back in the centres but they play the Eels in Melbourne next Sunday - so they may not rush him back just yet. Griffin or Kenny Bromwich get the final bench spot.

LATEST OF LATE MAIL: Farah has til Monday to prove his fitness for the Tigers... and do you really think he's going to tell Twitter if he's playing or not after 3000 niff nuffs message him? Iosefa has been named so he could play even if Farah does as cover with Luani missing out. Nofoaluma hurt his ankle in the 2nd half last week and may just be right due to the wait between games. Tuqiri returns, while Sue is in doubt with a dizzy head. The Roosters may yet include Minichiello if he's confident in his knee after a couple of weeks off.

What are your tips for Round 23?
Let us know by commenting below or replying on Twitter.