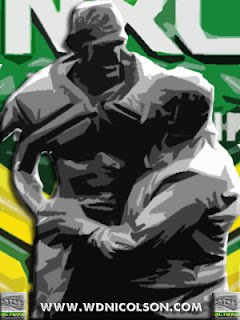 Here's a quick run-down of the final 3 rounds for the teams still in contention for the Finals.

The Roosters, Rabbitohs and Storm are definite Top 4 finishers, Manly need to win only one of their last 3 games to get the final spot, while Canterbury and Cronulla sit on 28 points - needing themselves just one more win to secure a Top 8 berth.

That leaves the two remaining playoff spots open... and there are up to seven teams who can still mathematically extend their season beyond Round 26.

Well some teams have only themselves to beat... others need more than a few favours - and that's even if they win out!

7 TEAMS INTO 2 PLAYOFF SPOTS - The Equation:

7th - Newcastle Knights
10-10-1 for 25pts | +70
Rd24 @ Cowboys
Rd25 @ Broncos
Rd26 v Eels
Top 8 Scenario: May only need to beat the Broncos in Round 25 to ensure they get in due to a superior differential than Brisbane given both are on odd competition points. Win twice and they probably finish 7th.

8th - Gold Coast Titans
10-11 for 24pts | -23
Rd24 v Warriors
Rd25 @ Roosters
Rd26 @ Storm
Top 8 Scenario: Despite being in 8th right now - they lose to the Warriors and this looks all over. Hardest final two games in the comp - both away to the likely Minor Premiers and then the defending premiers. 26 points won't be enough so they simply have to cause a huge upset in the other games to make it.

9th - Canberra Raiders
10-11 for 24pts | -122
Rd24 v Sea Eagles
Rd25 @ Warriors
Rd26 v Sharks
Top 8 Scenario: With an awful differential they must win 2 of 3 games but can book their spot if they win all 3. One win won't cut it so the Warriors game is a must-win and they must find a way to knock off at least one of the other two higher ranked teams. New coach and probable attacking style (that is they'll have one) helps...

Top 8 Scenario: Can make things interesting if they first beat Penrith then Newcastle in back to back weeks - that may even put them into the driving seat for a Top 8 spot before the Bulldogs game. Win all 3 and they make it.

11th - North Queensland Cowboys
9-12 for 22pts | +15
Rd24 v Knights
Rd25 @ Sharks
Rd26 v Tigers
Top 8 Scenario: Need to win all three games and rely on other results but by knocking off the Knights they would open their playoff door just a little wider.

13th - Warriors
9-12 for 22pts | -86
Rd24 @ Titans
Rd25 v Raiders
Rd26 @ Dragons
Top 8 Scenario: Need to reach 28 points due to their poor differential - so must win all 3 games but face two opponents who are ahead of them competing for a Top 8 spot. Game v Raiders the biggest of all 3 since Canberra is the only other team on even points (in contention) that they have a better differential than. 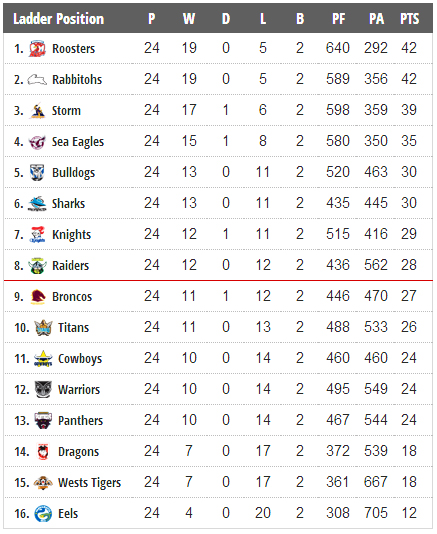 Want to discuss your team's chances at making the Top 8?
Comment below or catch me via Twitter @NRLTweet
By W D Nicolson