PLAYER OF THE YEAR: Inglis in pole-position? Plus Origin 2 Votes.
@NRLTweet Player of the Year Leaderboard after Round 15 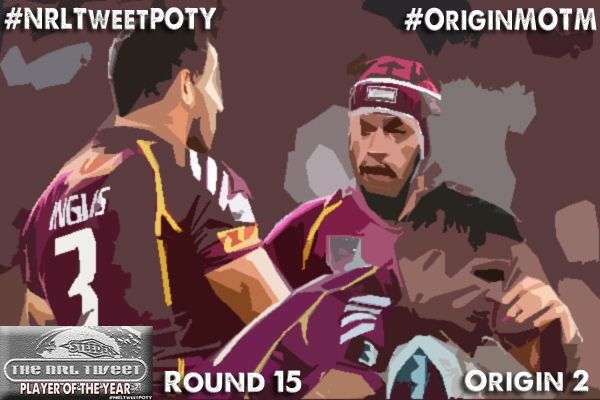 With 15 Rounds in the books for 2013, here is a look at the current leaderboard in the The @NRLTweet Player of the Year Awards. Plus we reveal which Queenslanders featured heavily in the Man of the Match Votes from Origin 2.

| @NRLTweet Player of the Year Awards Leaderboard after 15 rounds below |


Cronk's POTY lead dwindling as Inglis and Thurston close in...

Melbourne's Cooper Cronk still has the lead in the 2013 #NRLTweetPOTY Awards but his QLD team-mates Greg Inglis and Johnathan Thurston are now within striking distance through 15 rounds of the year.

Thurston provided a Man of the Match display in Round 14 to snap North Queensland's horror losing streak, while Inglis was his normal self as Souths beat the Titans in Cairns in the same round. Cronk on the other hand - got a rest against the Knights - so the gap between Cronk and his chasers is just 9 and 10 points respectively.

Shaun Johnson gained 2 votes in the Warriors' win over the Roosters in Round 14, but he dropped to 4th on 32 Votes, one ahead of Todd Carney and Adam Reynolds on 31 votes. Sonny Bill Williams is 7th on 30 votes.

Reynolds picked up all 8 votes in Round 15 - while team-mate John Sutton (9th) received 4 votes - meaning South Sydney now have FOUR players in the Top 11 Vote getters this season. The 4th is Sam Burgess in 11th with 24 votes.

The biggest threat to Inglis is not necessarily the form of Cronk or Thurston - but of Reynolds, Sutton and Burgess - as there just might not be enough votes to go around over the second half of the season.

But what about Thurston, Johnson and Carney (with Paul Gallen now hurt again) - will their lack of natural threats to points give them a leg up in the battle to win the 4th Annual #NRLTweetPOTY Award?

The current Leaderboard can be found below the Origin 2 Man of the Match Results.

When the supporting votes were tallied, Thurston emerged with

Corey Parker now jumps into outright 2nd behind Luke Lewis on the overall voting leaderboard through two games. He has 22 votes (he picked up 4 in Game 1), trailing Lewis on 26 votes (none in Game 2). Johnathan Thurston is 3rd with 19 Votes in Game 2, while Jarryd Hayne (17 Votes) and Robbie Farah (11 Votes) round out the Top 5.

Remember - Man of the Match performances (see below for explanation on how votes are cast) mean more in these Awards than picking up the minor votes regularly because we judge based on a players ability to directly contribute to wins by his team - which really are the basis for that team making the Finals - which is why we play the game.
Note: This is why these Awards are considerably different to the Dally M's where regular 2 and 1 votes are more important than getting 3 a few times a year.