PLAYER OF THE YEAR: Carney makes his move
@NRLTweet Player of the Year Leaderboard after Round 12 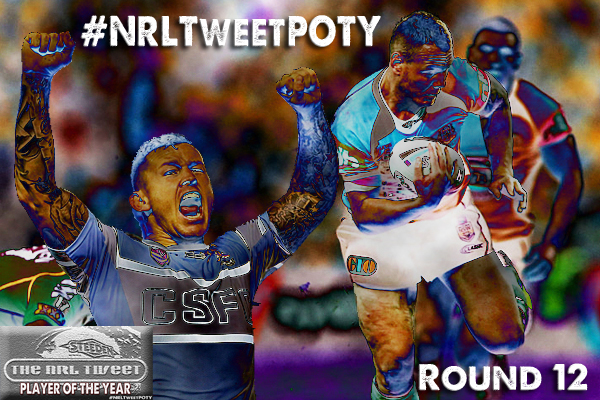 With 12 Rounds in the books for 2013, here is a look at the current leaderboard in the The @NRLTweet Player of the Year Awards. Also included is the Man of the Match Votes from Origin 1.

| @NRLTweet Player of the Year Awards Leaderboard after 12 rounds below |
Todd Carney lays down a challenge as we near halfway mark...

The Cronulla playmaker put up quality performances for three straight weeks from Round 9-11 and the 18 Votes he picked up launched him into outright 2nd in the race for the #NRLTweetPOTY Award for 2013.

Cooper Cronk still leads with 39 Votes (he was Man of the Match in Round 11's win over Easts), but as the Origin period hits - he might find it hard to keep his current 8 point lead over Carney.

Carney now has 3 Man of the Match efforts (latest in Round 9's win over the Tigers), and trails only Cronk's total of 4 (Rd 1-2-6-9) for the most this season. Shaun Johnson of the Warriors drops down a spot to 3rd, but like Carney - his 3 Man of the Match Awards (Rd2-4-8) are the big reason he's dancing with the leaders at the halfway mark.

Remember - Man of the Match performances (see below for explanation on how votes are cast) mean more in these Awards than picking up the minor votes regularly because we judge based on a players ability to directly contribute to wins by his team - which really are the basis for that team making the Finals - which is why we play the game.
Note: This is why these Awards are considerably different to the Dally M's where regular 2 and 1 votes are more important than getting 3 a few times a year.

Sydney's Sonny Bill Williams is in 4th with 28 votes - helped largely by his stretch of gaining at least 2 votes in 7 of his last 9 games, while Greg Inglis rounds out the Top 5 with 27 votes. Johnathan Thurston sits in 6th on 26 points before the chasing pack begins to clog.

There are no less than 8 players on 24 and 23 votes - about two Man of the Match performances behind Cronk as we hit the halfway mark.

Looking at the Top 10 Vote getters thus far... Carney, Johnson and Williams are not impacted by Origin (Carney's the only chance of making an appearance) and with only NRL games counting in the race for the Player of the Year Award - these games through June and July can make or break a challenge.

Note the absence of such names as Benji Marshall, Paul Gallen, Cameron Smith and Daly Cherry-Evans... all four are perennial contenders but they will need a huge second half to get back into the running.

Can Cronk hold onto his lead through the Origin Period? Who makes their charge in the next few weeks?

Now for interest's sake - if a 'Team of the Year' was picked right now based purely on votes, this is how it would look (to qualify a player needs at least 3 games in the position):

NRL TEAM OF THE YEAR (Through 13 Rounds)

@NRLTweet Player of the Year - Top 5 Team Votes after Round 12
How Votes are awarded is explained above.