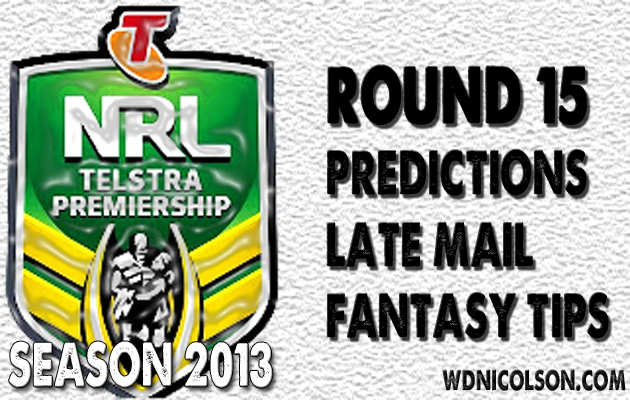 Continue reading below for the Round 15 Tipping Preview. 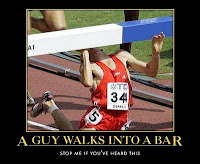 Was it Blake, Josh, George or Mal?!

Anyhoo... onto the footy. Origin 2 is next Wednesday in Brisbane - so only 8 teams are playing in Round 15,  and of those 8 teams - they don't have their Origin stars.

So realistically - don't expect much in terms of quality this weekend, but hopefully a game or two is half decent and the stars who are still playing do the business.

To the tips!
Enjoy

For our analysis of Tuesday team selections for Round 15 - click here.

The Postman has did a bunch of NRL Dream Team and NRL Super Coach gems last week... no soup for you - 1 week!

@NRLTweet Player of the Year
Voting Allocation for Round 15 of the NRL is below.

@NRLTweet's PREDICTION:
Given the Roosters had the bye during Origin 1 only now do you really see how much they'll miss without Jennings, Maloney and Pearce. Their replacements? Guerra, Aubusson and Mortimer. OUCH.
The Bulldogs on the other hand lose Josh Reynolds and Josh Morris - losses sure, but the Dogs won't change how they play too much without them. The Roosters on the other hand - with only one genuine half who can kick in general play - will have to direct everything through Mortimer. That's a recipe for Des Hasler to aim his big forwards at Daniel all night and get a shooter to keep pressure on Mortimer when he's getting ready to kick. Even if Trent Robinson moves SBW to five-eighth - Gotta tip the Bulldogs by 6 points. Oh and SBW plays in front of a pro-Doggies crowd on Friday... happy days.

LATEST OF LATE MAIL:
BULLDOGS: Tony Williams didn't look 100% against Manly so he might come off the bench again with Josh Jackson starting. Kris Keating is not the flavour of the month at all if Joel Romelo is getting the five-eighth jumper back.

LATE UPDATE? Not expecting any new faces in the lineup, bar the pack reshuffle.
The Postman's DT/SC TIP: No soup for you - 1 week!
ROOSTERS: There's a huge chance the Roosters play SBW at five-eighth, move Mitch Aubusson to centre and start Aidan Guerra in the backrow. While in some good news for the Roosters - Tautau Moga makes his return to the NYC after a knee injury in the pre-season... he would normally slot straight in for Jennings but needs a few weeks before he's a serious chance at ousting Shaun 'Can't hold the ball' Kenny-Dowall.

LATE UPDATE? So how is SBW's hamstring? Find out at about 6:30pm Friday night.
The Postman's DT/SC TIP: No soup for you - 1 week!
If you have a DT/SC question grab The Postman on Twitter @NRLTweet and I'll answer there.

@NRLTweet's PREDICTION:
The Tigers will try and muscle up against Canberra after failing to do so in Brisbane... so don't think Canberra are good things here by any stretch. Upside for the Raiders is they are only technically missing one Origin player in Josh Papalii but Blake Ferguson's idiocy hasn't helped the cause. Canberra's pack does look handy here though, especially with Aaron Woods and Robbie Farah playing Origin for the Tigers. Benji Marshall once again represents the Tigers' best hope but if Canberra are fair dinkum about getting a bit of a roll on during this period of the year - you've got to tip the Raiders by 6 points.

LATEST OF LATE MAIL:
TIGERS: Do we see Chris Lawrence this week? Neither Joel Reddy (form) or Tim Simona (copped a knock last Monday) look safe, so don't rule it out. Bodene Thompson isn't a sure thing to return from an ankle injury. Remember this team was named after a MNF game - so could certainly change.

LATE UPDATE? Lawrence and Meaney come in, Tedesco and Pettybourne go out.
The Postman's DT/SC TIP: No soup for you - 1 week!
RAIDERS: Sami Sauiluma gets first crack at the opening out wide with Edrick Lee's injury and Ferguson's idiocy... there are a few options for David Furner in NSW Cup and NYC - but Sami gets his chance. Jarrad Kennedy has been named to play it seems 3 or 4 times and hasn't got a run - so don't be stunned if Joe Picker or Jake Foster get a call up at the poor kid's expense!

LATE UPDATE? 1-17.
The Postman's DT/SC TIP: No soup for you - 1 week!
If you have a DT/SC question grab The Postman on Twitter @NRLTweet and I'll answer there.

@NRLTweet's PREDICTION:
Parramatta started well against Cronulla but they were not match for the Sharks in the end. Same goes here - even with South Sydney minus four Origin players. Parra's only avenue to points looks like Chris Sandow... so this preview could end now really. Expect Jacob Loko to start - so that gives Parra two avenues. But Souths have John Sutton, Adam Reynolds and Issac Luke in good form... and enough replacements of good enough quality to make them firm favourites here (even with George Burgess and his idiocy out as well). Bunnies by 16 points.

LATEST OF LATE MAIL:
EELS: The Eels won't leave Loko out of the starting lineup, so he'd come in for Williame or Blair. Also Roberts is about due a second chance at starting, with Paulo moving into the pack. O'Hanlon would get a run on the bench if Loko starts.

LATE UPDATE?
The Postman's DT/SC TIP: No soup for you - 1 week!
RABBITOHS: There are a lot of changes for the Bunnies in the actual lineup - so don't expect many more on gameday. It is however surprising to see no Jason Clark on the bench - don't rule him out as a late addition.

LATE UPDATE?
The Postman's DT/SC TIP: No soup for you - 1 week!
If you have a DT/SC question grab The Postman on Twitter @NRLTweet and I'll answer there.

@NRLTweet's PREDICTION:
Tipping against Melbourne? Well these pre-Origin weeks are the only time all season you should feel moderately like tipping against the Storm. Don't get me wrong - they'll still put out a good team but the Titans have enough depth in their pack to allow their quality halves/fullback mix tip this game in their favour. If the Titans play some footy - I don't think the Storm have enough points in them without the Big 3 to run with the home team. Titans by 13 points.

LATEST OF LATE MAIL:
TITANS: The loss of Myles and Bird hurts, but if Minichiello is over a hamstring strain - they get solid replacements in Mini and Ioane who has impressed in his limited chances. The other advantage the Titans have is at hooker with the one two punch of Srama-Irwin (assuming Irwin gets a run ahead of O'Dwyer).

LATE UPDATE?
The Postman's DT/SC TIP: No soup for you - 1 week!
STORM: Good to see Ben Hampton get a run but he'll be tested. The three-quarter line is settled despite Fonua's presence on the bench, while the pack represents Melbourne's best chance at winning. So much so that Lagi Setu, Junior Moors and Kenny Bromwich (who were not named) could all join the bench by gameday.

LATE UPDATE?
The Postman's DT/SC TIP: No soup for you - 1 week!
If you have a DT/SC question grab The Postman on Twitter @NRLTweet and I'll answer there.

What are your tips for Round 15?
Are you taking any advice from our Awesome Foursome panel this year?
Let us know by commenting below or replying on Twitter.