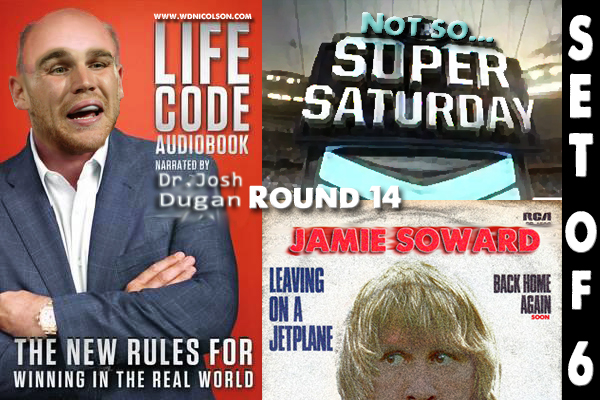 This is a regular feature on www.wdnicolson.com - every week we will post a Set of 6 Tackles that form a Complete Set by the end of the Round. It also features Votes from Round 14 of The @NRLTweet Player of the Year Awards. Let us know what you think of each topic via @NRLTweet

ROUND 14 #NRLTweetPOTY VOTES plus more below

14TH COMPLETE SET:
A tip of the hat to the SMH's 'Set of 6' and Andy Wilson's 'Set of 6' for the various names this column runs under... and we'll call it flattery that you've already used it.
CURRENT NRL LADDER 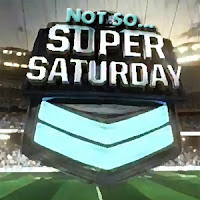 With the return of Sunday Night Football in Round 13 and 14... it is clear as day that Fox Sports has to push for a Sunday Night game every round after the Origin Series (that is from Round 21 onwards when the day schedule is confirmed sometime around Round 15 or 16).
Super Saturday sounds great but in reality - having two games running against each other in the 7:30pm timeslot is ridiculous.
Super Sunday gives Fox Sports games at 2pm and 6:30pm, losing viewers to the Channel 9 delayed 4pm game but getting them right back at 6pm.
It is such a no-brainer given the amount of people now will not wait til the replay game at 9:30pm on a Saturday night before finding out the result. And if the result isn't interesting - they won't watch it.
And in another dose of happy days for viewers - Thursday Night Football is surely set to get another run in place of the second Friday Night game in that final stretch of the season...

@NRLTweet Player of the Year - Round 14
Votes from Round 14 so far are below. 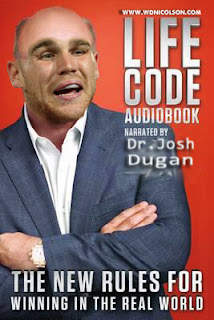 Enough has been said on some footballers being idiots...

What is rather surprising is when people are surprised that some players go back to doing what they've done before when everything seems rosy again... you can't continue to pander to someone when they stuff up and expect the not so cluey ones to never do it again.
Remember the most important factor in giving a footballer a second and third and forty-second chance is - how good are they at football?
Rather than perhaps: have they learned from their mistakes, how will keeping said player on his contract reflect on them and the club etc...
All about the wins baby!
So please don't get me started on how quickly the press did an about face on Josh Dugan even before Jarryd Hayne got hurt... now Blake Ferguson has now undone the goodwill he built up on his own and has been de-registered by the NRL... geeeeesh!
Anyhoo - this is apt: check it out 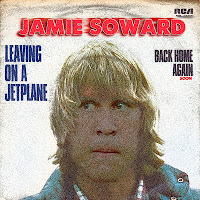 Jamie is leaving on a jet plane...

It was always going to happen the moment Soward was dropped a few weeks ago... that is - he would be released and play the rest of the season for someone else.
But it wasn't going to be the Penrith Panthers (who he has signed a 4 year deal with from 2014) because they were already in a Salary Cap feud with the NRL over the 2nd Tier Cap... meaning if they tried to get dispensation for Soward's 2013 salary... well in short - the NRL was never going to give them that if they weren't willing to let Matt Moylan continue to play on a salary that was below the minimum.
So Soward ended up looking overseas and the London Broncos threw him a 6 month lifeline... after watching Craig Gower decide a bit-part role on the Newcastle Knights was better than being starting halfback for the London side...
Good luck Jamie... but your comments about another Dragons contract 'working itself out' proved correct. He wasn't a match-winner this year like they needed him to be - so the Dragons moved on.
Now Soward is really moving on... but he should be back for Penrith's off-season.
Well if he's true to the lyrics in the song... maybe he isn't... 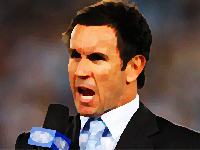 State of Origin Game 2... slightly underwhelming build up so far right?
Give it a few more days, let the issues sort themselves out, and it'll take off again - making the 4 games of Round 15 of the NRL this weekend nothing more than footnotes - but when you compare how everyone was hyped up deluxe for Game 1 for months (let alone a week out)... things are a little subdued right now aren't they?
Granted they won't be come Wednesday week - as we will see almost certainly - the NRL's new punch your way to the Sin Bin edict tested in Game 2...
Who is the smart money on for the first fists of fury? And will they really get binned?
To be perfectly honest - I am surprised we haven't seen a betting company frame a market for that yet?
Or have they and I haven't been looking for it?

Bad football is bad football..
The quality of the Tigers-Broncos game was only saved by the individual drive of a couple of Brisbane forwards... watching Matt Gillett and then Scott Prince walk through non-existent defence was soul destroying - and I'm not even a Tigers fan.
Compare Sunday's footy to Monday's and weep with me... the Origin period is somewhat to blame but so are some truly ordinary footy teams.

@NRLTweet Player of the Year Award
Round 13 Votes
As regular readers of www.wdnicolson.com and followers of @NRLTweet know - we run The @NRLTweet Player of the Year Awards each season (starting in 2010) and they return once again for 2013 with another group of excellent Rugby League judges.
You can follow the Votes live after each game via this Hashtag #NRLTweetPOTY
One of the reasons we set this up is the Dally M Award lacks the kind of objectivity that a true player of the year award really should have, and while we aren't claiming our system is perfect - it is judged on what happens on the field with reputations and bias left by the wayside.