NOT The Footy Show Episode 75

| We speak to former Manly and Canberra prop Mark Bryant about the demise of the Crusaders club in the UK Super League this week.  How big a deal is Petero Civoniceva moving to the Broncos? The Rugby League Week Players' Poll, NRL Captions take off and can players like Jarryd Hayne expect to be treated normally or do they realise they'll be targeted by idiots when out?
And to discuss this we've got regulars - Maria Tsialis, Nic McInerney and Dave Chapman joining Warrick Nicolson to dissect Rugby League.
Plus we Review Round 20 of the 2011 NRL Premiership, while giving you our Special Fried Rice selections and tips for Round 21.
TIPPING VIDEO PREVIEW -

Note: The order in which Special Fried Rice (the game we guarantee that team will win) is chosen rotates - this week Matt had 1st choice, Dave 2nd, Nic 3rd and Waz 4th. So it isn't as easy as it sounds to tip correctly each week.
You can check out who the NOT The Footy Show Experts picked for the 2011 Premiership via this link.
NOT The Footy Show Podcast is available every Thursday - subscribe now on iTunes so you don't miss out.
Check out the Round 21 Tipping Preview below...

ROUND 21 MATCHUPS
28/07 Odds are courtesy of Sportingbet Australia 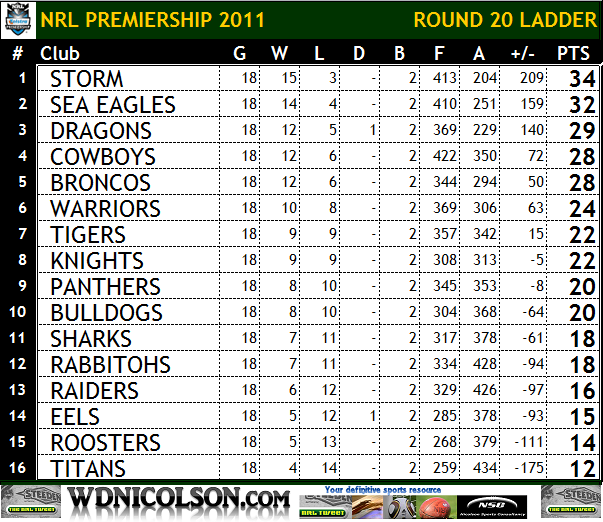 NRL TWEET PLAYER OF THE YEAR VOTES
The Leaderboard has gone silent... we will however still be posting the Votes each week in the Results Blog.

THE NRL TWEET's ROUND 21 PREVIEW

CRO: Gardner, Williams, M Wright, Best, Stapleton, Graham, Townsend, Cordoba, Morris, Douglas, Tautai, Tupou, Smith (c). Bench: Snowden, Tagataese, Flanagan, Pomeroy, Mannah.
[Team Changes - The Sharks didn't bother to name Paul Gallen this week - which meant he was never any chance to play against the Knights last weekend. That being said he might still be some hope for the trip to Brisbane. Nathan Gardner has recovered from a head knock and Kade Snowden's shoulder injury was just a stinger. Matthew Wright returns from a neck injury to displace Ben Pomeroy in the centres. Taulima Tautai keeps his starting spot in the backrow. ]
Wednesday Game Preview...

To find out the Panel's tips and why they are tipping them - listen to the Podcast or watch the Tipping Video.
Tipping + Fantasy Late Mail...
SMH and Other Late Mail 29/07 - There is a strong chance Paul Gallen will play for Cronulla after travelling with the side to Brisbane. Darren Lockyer (hammy) is expected to play after training all week. Latest... Paul Gallen remains a strong chance to play - roll the dice if he's in your fantasy team. Kade Snowden's shoulder shouldn't keep him out. DT reports Gallen won't play (at 12pm) and Tyson Frizell will make his NRL debut.
The NRL Tweet's Tip...

To find out the Panel's tips and why they are tipping them - listen to the Podcast or watch the Tipping Video.
Tipping + Fantasy Late Mail...
SMH and Other Late Mail 29/07 - The Tigers will give Todd Payten as long as possible to be right and if he is - Matt Groat will probably make way. Anthony Watmough is expected to play as is Michael Robertson after they missed last week. Latest... Wade McKinnon has been ruled out with a rib complaint, meaning Andrew Fifita may get a late reprieve. The Sea Eagles should have Watmough and Robertson.
The NRL Tweet's Tip...

CBY: Barba, Turner, Lafai, Idris, Wright, Roberts, Hodkinson, Tolman, Romelo, Kasiano, Pritchard, Ryan (c), Halatau. Bench: Eastwood, Armit, Payne, Reynolds.
[Team Changes - The Bulldogs have lost David Stagg to an ankle injury and Corey Payne comes back from a week in the NSW Cup to replace him on the bench. Martin Taupau is also out for the rest of the season with an ankle injury and Chris Armit gets another chance in the top grade. The big news is the retention of Tim Lafai ahead of Josh Morris - who promptly scored a hat-trick in his first game in the NSW Cup after being dropped. ]
Wednesday Game Preview...

To find out the Panel's tips and why they are tipping them - listen to the Podcast or watch the Tipping Video.
Tipping + Fantasy Late Mail...
SMH and Other Late Mail 29/07 - Frank-Paul Nu'uausala was rubbed out for two weeks after unsuccessfully contesting a dangerous tackle charge and Tom Symonds will now get a run. Latest... Kane Linnett is still no certainty with Phil Graham the player most likely on standby.
The NRL Tweet's Tip...

PEN: Simmons, Walker, Jennings, Tighe, Purtell, Seijka, Walsh, Grant, Kingston, Civoniceva (c), Waterhouse, Plum, Lewis. Bench: McKendry, Weston, Smith, Bell.
[Team Changes - The Panthers have lost Lachlan Coote for a couple of weeks with a leg injury and have moved David Simmons to fullback as cover. Ryan Walker comes onto the wing and with Travis Burns also hurt, Harry Seijka gets his chance at five-eighth. Luke Lewis has been named t play but is probably no better than a 50/50 prospect at this stage. Nafe Seluini has been dropped. ]
Wednesday Game Preview...

To find out the Panel's tips and why they are tipping them - listen to the Podcast or watch the Tipping Video.
Tipping + Fantasy Late Mail...
SMH and Other Late Mail 29/07 - The Cowboys have Scott Bolton coming back from injury in the QLD Cup but could be a roughie here. The Panthers will likely take Luke Lewis to Townsville but he is no certainty to play. Latest... Luke Lewis has until today (Friday) to prove his fitness (passed a fitness test will travel). Johnathan Thurston is running but not expected to return until next week at the earliest.
The NRL Tweet's Tip...

WAR: Locke, Tupou, Moon, Berrigan, Vatuvei, Maloney, Johnson, Packer, Heremaia, Lillyman, Mateo, Mannering (c), Luck. Bench: Godinet, Sam Rapira, Matulino, Taylor.
[Team Changes - The Warriors will be without utility Lance Hohaia for a second week due to a knee injury, allowing Pita Godinet to get another chance on the bench. Feleti Mateo and Jacob Lillyman are listed to start but don't be surprised if Elijah Taylor and Ben Matulino start in their place again. ]

CAN: Dugan, Ferguson, Croker, Thompson, Vidot, McCrone, Williams, White, Tongue (c), Tilse, Papalii, Harrison, Fensom. Bench: Buttriss, Miller, Galea, Mataora, Picker.
[Team Changes - Canberra kept their incredible winning run over the Dragons going and in return David Furner has kept the 16 of the 17 that won and added Joe Picker and Josh Miller to the bench as cover for the loss of Trevor Thurling (Achilles). Joel Thompson is expected to overcome a head knock to play, while Jarrod Croker seemed fine in his comeback from a back injury. As did Josh Papalii who continues to start for the Raiders despite hurting his groin just a few weeks ago. ]
Wednesday Game Preview...

To find out the Panel's tips and why they are tipping them - listen to the Podcast or watch the Tipping Video.
Tipping + Fantasy Late Mail...
SMH and Other Late Mail 29/07 - The Raiders have trained this week without Joel Thompson who is suffering headaches after a head knock on Monday, Danny Galea would likely start for him and there is a chance David Shillington might make the trip to Auckland after completing a training session this week. Latest... David Shillington is expected to travel to Auckland and play Sunday. The Warriors are fine.
The NRL Tweet's Tip...

To find out the Panel's tips and why they are tipping them - listen to the Podcast or watch the Tipping Video.
Tipping + Fantasy Late Mail...
SMH and Other Late Mail 29/07 - The Knights are expected to rule Jarrod Mullen out by the weekend. Tyrone Roberts or Peter Mata'utia would come in if he is out. Latest... Is this the opening the Titans have been looking for? Not only is Jarrod Mullen long odds to play but Ryan Stig has a groin problem and although he'l play Kurt Gidley's hamstring is not 100%. Evarn Tuimavave has a virus but should play. Scott Prince has a cold but should play.
The NRL Tweet's Tip...

SOU: Wesser, Merritt, Farrell, Inglis, McQueen, Sutton, Sandow, Ross, Luke, McPherson, Clark, Pettybourne, Crocker (c). Bench: L Burgess, Tyrrell, Lowe, Peats, Corrigan.
[Team Changes - The Bunnies have named skipper Michael Crocker to return from a one week rest due to a head knock and he has forced Ben Lowe back to the bench. Shaune Corrigan is once again listed on an extended bench as cover in the outside backs. Otherwise there are no changes from the team that got pummelled 48-16 by the Warriors. ]
Wednesday Game Preview...

To find out the Panel's tips and why they are tipping them - listen to the Podcast or watch the Tipping Video.
Tipping + Fantasy Late Mail...
SMH and Other Late Mail 29/07 - The Dragons expect Ben Hornby, Dan Hunt and Jon Green to play, while Jamie Soward has had the flu this week. The Bunnies hope to get Michael Crocker back from a concussion this week. Latest... All suspect Dragons should play and the Bunnies expect Crocker to as well.
The NRL Tweet's Tip...

MEL: Slater, Duffie, Nielsen, M Blair, O'Neill, Widdop, Cronk, Bromwich, Smith (c), Norrie, A Blair, Manu, Proctor. Bench: Kostjasyn, Hinchcliffe, Woolnough, Lowe.
[Team Changes - The Storm will trot out the same 16 of the 17 man squad that beat the Broncos - with Matt Duffie's return from a sternum injury for Beau Champion on the wing the only change. But as always with Melbourne - don't discount a late change. ]
Wednesday Game Preview...

To find out the Panel's tips and why they are tipping them - listen to the Podcast or watch the Tipping Video.
Tipping + Fantasy Late Mail...
SMH and Other Late Mail 29/07 - The Storm might carry Beau Champion to Sydney as cover for Matt Duffie (sternum) after the flanker missed last Friday's game. Latest... Shane Shackleton has a calf issue but should play.
The NRL Tweet's Tip...

NOT THE FOOTY SHOW's EXPERT TIPS:
ROUND 21 SELECTIONS

]-[ There are just 6 weeks left in NOT The Footy Show's Tipping Competition and the outright winner walks away with an Official Steeden Match ball.
TIPS DONE, GO OUT AND ENJOY THE FOOTY
By W D Nicolson