'We'll play out the season for the fans' Crusaders players respond to Super League exit.

"It was absolute pandemonium."

That was the way current (now soon to be former) Crusaders front rower Mark Bryant summed up the reaction of the playing group after their coach Iestyn Harris informed them that the club had withdrawn its application to be part of the Super League competition in 2012.

In an interview with NOT The Footy Show to be released in full Wednesday July 27, Bryant - who played in the NRL with Canberra and won a premiership with Manly in 2008 before heading overseas - opened up about how the club had been involved in a number of off-field situations that left all the players either out of pocket or suspicious of how long the club itself might be around for.

The answer to the latter was just three seasons.

Crusaders CEO Rod Findlay announced on Tuesday July 26 that the club had decided to opt out of Super League in 2012 after "a lengthy and exhaustive examination of the club's finances, our view is that Crusaders is not sustainable as a Super League club at this stage. It wasn't responsible to go forward on the hope that we'd be able to survive the three years (required by the new Super League licence - read a fan's view of the licensing system here)."

This leaves a large number of current Crusaders without a club for next season and Bryant says many of the overseas players who joined the club for its début season in 2009 are facing a situation where the pension benefits that were part of their initial contracts are unlikely to be paid. And in fact - were used to keep the club afloat in its first two seasons.

"We were told that that money was taken (for pension funds) and it was sitting in a trust account, but it turns out it wasn't sitting in the trust account and that the owner had used it to pay bills. It turns out that this fund wasn't paid for the first two seasons and four or five Australian guys were sacrificing forty percent of their salary to keep the club afloat. And now that we are not in Super League the RFL cannot guarantee that money will be paid."

And it appears that current contracts for 2011 are not safe either.

"When the CEO met with us, he couldn't give us guarantees that the club would pay us all of our money for the rest of this year, so at the moment there is a lot that is up in the air," Bryant said in an honest interview Tuesday.

As for his own future, Bryant counted himself fortunate.

"I was lucky enough to agree to terms with another Super League club for next season a few weeks ago." The fans in North Wales (the Crusaders has been based out of Wrexham since 2010) however have not been so lucky and Bryant feels for them.

"The town really got behind the Crusaders. The crowds had been down this year but this had been felt across a number of different sports. But there is a loyal fanbase, it's not a huge fanbase like some of the clubs like Leeds and Warrington but it was loyal and they are absolutely gutted. It leaves North Wales without a top flight team in any sport, not just rugby league and it is really disappointing for the fans."

The fans and current players aren't the only ones being left high and dry by the decision, with new signings Keith Senior and Shannan McPherson (who left their current clubs Leeds Rhinos and South Sydney Rabbitohs) no longer able to take up long term deals with the Crusaders.

Finally Bryant was asked how this decision impacts how the players go about the rest of the season, knowing that the club would not be around next year.

"I personally wouldn't like to let my personal standards slip and I know that the guys would be keen to go out there and prove a point. A lot of the guys don't have clubs for next year and they are really playing for new contracts. I know the club hasn't given us anything really but we'd like to repay the fans, who are very loyal, and give them something to cheer about for the last five games."

To listen to the full interview click the player below or download the MP3 file of the new episode via this link.

Mark Bryant's interview is 4 minutes into the Podcast and goes for 13 minutes.
In the rest of the 13 minute interview - Mark Bryant also discusses the impact of no team in Wales on the Millennium Magic Round of Super League in 2012, how he came to leave Manly-Warringah after their premiership in 2008 and how an Australian based in the UK keeps tabs on the NRL back home.

Full Mark Bryant Interview will be released via iTunes and www.wdnicolson.com on Wednesday July 27 as part of NOT The Footy Show Episode 75.
Subscribe today for an in-depth look at Rugby League.
]-[ ]-[ ]-[
See below for a snapshot of the current Crusaders Website from 12:37am Wednesday July 27 AEST - advertising a new position for a club that won't be around in 2012. 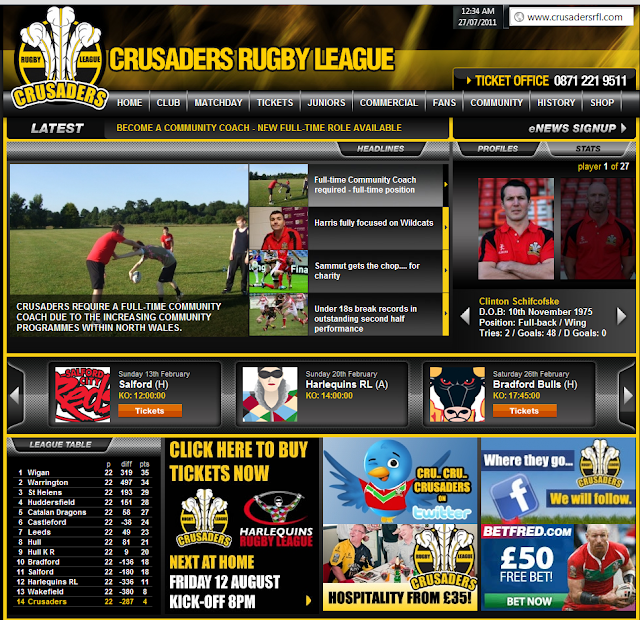 Full Round NRL Preview available each Wednesday/Thursday on www.wdnicolson.com with the Latest Mail, NOT The Footy Show Panel Tips, Injury Updates and Key Stats.
By W D Nicolson