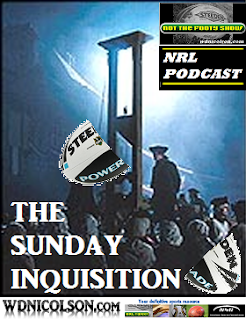 Welcome to the second edition of The Sunday Inquisition - a look at what the weekend of Rugby League threw up and why it should matter to you.

Every Sunday for the rest of the season on wdnicolson.com - these observations will be presented in note form for your consumption. If you think we have missed anything don't hesitate to email the author and you will be credited with your contribution. Alternatively let us know via The NRL Tweet on Twitter. If you want game highlights and Player of the Year Votes - click the link for the Results Blog (Monday).

If you have 5 minutes please fill out NOT The Footy Show's NRL Fan Survey http://www.wdnicolson.com/p/nrl-fan-survey.html and all results will be dissected on the LIVE broadcast of Episode 74 at 8:25pm on Wednesday July 20 via ustream or pick up a copy of the Podcast on Thursday via iTunes.

So here we go... the format may change as the weeks continue but we hope you enjoy the newest edition of The Sunday Inquisition.

The format has changed slightly - Game Highlights are added as links - the Press Conferences are being held over for the Results Blog - and the thoughts are a little more randomly added after the game notes are somewhat listed. And it is much shorter than last week. (Well that was the intent before it was finished).
Feedback welcome on what could be the best format - spread the word and comment with your own thoughts - this is a blog that is meant to get you thinking - so get to it.

THE ROUND 19 RESULTS BLOG IS
The NRLTweet's Results Blog covering Stats, Injuries, Game Summaries and Votes for The NRLTweet Player of the Year.
So there is the Sunday Inquisition for Round 19. If you enjoyed it please let us know how to improve it and we'll try to do just that. Make any suggestions in the comments below or via a reply and retweet on The NRL Tweet.

Mon @ WIN Jubilee | LINE: CRO +8.0 GAME STATS
PS. Memo to the Dragons - for the first time this year I'm 7 from 7 in the tipping going into Monday Night Football... lose to the Sharks and I'll declare you certainties for the Premiership.
PPS. And thus the mock will come into full effect - nullifying any chance the Dragons have of going back to back.
]-[ ]-[ ]-[

THE THE NRL TWEET's ROUND 19 REVIEW IS HERE

Right Click Save Target As This Link if you don't have iTunes.
TIPPING VIDEO PREVIEW

Catch NOT The Footy Show on iTunes Every Thursday during the 2011 NRL Season.
By W D Nicolson