THE NRL TWEET's ROUND 17 REVIEW

Here on www.wdnicolson.com we've got all the Game Results, Match Reports, Game Highlights, Game Stats, Injury News and NRL Tweet Player of the Year Award Votes in the one place.
This Round Review also integrates our NRL Injured List - which if you haven't bookmarked by now - I suggest you do so.
Player of the Year Votes are added as awarded by our panel - all votes are usually up to date by Tuesday. Fantasy League Leaderboard Updated Monday and Tuesday.

ROUND 17 RESULTS
30/06 Odds are courtesy of Sportingbet Australia 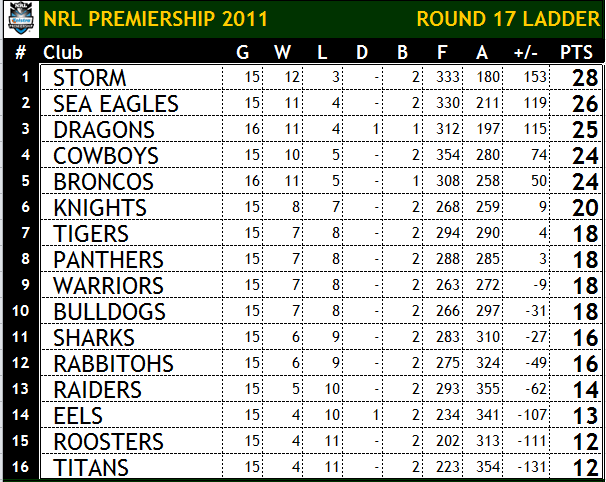 NRL TWEET PLAYER OF THE YEAR VOTES
AFTER ROUND 17 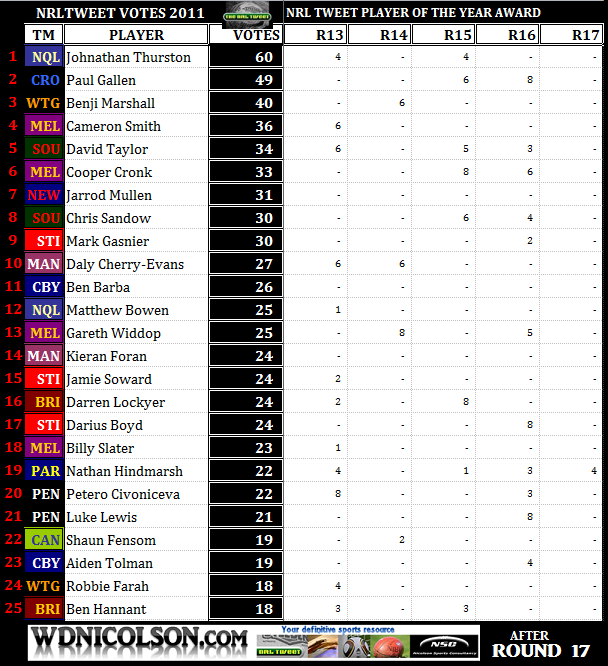 NOT The Footy Show Episode 71
- Round 17 Review Podcast Released June 5, 2011 -
Right Click Save Target As This Link if you don't have iTunes.

Note: The order in which Special Fried Rice (the game we guarantee that team will win) is chosen rotates - this week Matt had 1st choice, Dave 2nd, Nic 3rd and Waz 4th. So it isn't as easy as it sounds to tip correctly each week.
You can check out who the NOT The Footy Show Experts picked for the 2011 Premiership via this link.
NOT The Footy Show Podcast is available every Thursday - subscribe now on iTunes so you don't miss out.

THE NRL TWEET's ROUND 17 REVIEW

7:45pm (Local) 1 July @ Parramatta Stadium, Parramatta.
NRLTweet Game Summary: Despite more quality possession, Parramatta sport Broncos a 12 point lead, tie it up, then lose it with 5 mins left; Brisbane win 16-12.
Injuries: Kurt Baptiste (Shoulder - late withdrawal), Jacob Loko (Knee)
2011 @NRLTweet Player of the Year Votes
Judge: Haylen Southon
4 - Matt Gillett, BRI
Scored a match winning solo try. Also put in a Corey Parker like workload at lock forward.
2 - Luke Burt, PAR
Desperately tried to spark the Eels all night. Scored all the Eels 12 points, with 2 tries and 2 conversions. Also took on the responsibility of the general play kicking duties.
1 - Dane Gagai, BRI
Scored 2 Tries, including a 85 metre intercept. The rookie outplayed the more experienced Chris Walker.
Judge: Warrick Nicolson
4 - Nathan Hindmarsh, PAR
Must be on Energizer batteries because he just keeps going and going and going. Made 33 tackles in the 1st half and backed it up with 27 in the 2nd half. Refuses to let himself be beaten and throws himself into every tackle and makes sure he's there to cover up. Made tackles in 34 of Brisbane's 38 sets and made at least 3 tackles in 7 of those sets. Did everything he could to get the Eels a win.
2 - Matt Gillett, BRI
Took on Casey McGuire late in the game and beat him easily. Split two lazy cover defenders and then had the angle to outpace Luke Burt to score the match winner. The Broncos need to get him more game time when Parker and Thaiday return.
1 - Andrew McCullough, BRI
Made a big difference when he was on the field. Got spelled in the second half when Parramatta made their charge then made a difference in the middle when he returned. Still has the odd clanger in him but he's always improving.
GAME HIGHLIGHTS
|-| |-| |-|

7:35pm (Local) 2 July @ Centrebet Stadium, Penrith.
NRLTweet Game Summary: The Penrith Panthers rallying around interim coach Steve Georgallis, easily beat a impotent Canterbury 20-6 at Centrebet Stadium.
Injuries: TBA
2011 @NRLTweet Player of the Year Votes
Judge: Ben Hoese
4 - Luke Walsh, PEN
In control thanks to his pack. Had a strong kicking game and 3 try assists.
2 - Travis Burns, PEN
Good support play, scored 2 tries and made 39 tackles.
1 - Andrew Ryan, CBY
Made 49 tackles in 72 minutes of play. The Canterbury skipper was one of the very few good players in a sub-par team effort.
Judge: Justin Davies
4 - Luke Walsh, PEN
Once again, controlled the game with his kicking and all three of Penrith's tries came from his boot.
2 - Travis Burns, PEN
A little terrier in defence and attack. Burns is one player, the opposition never likes to play against.
1 - Sam McKendry, PEN
Went hard all night, finishing with 23 tackles and 11 hitups for 107 metres.
GAME HIGHLIGHTS
|-| |-| |-|

2:05pm (Local) 3 July @ Toyota Stadium, Cronulla.
NRLTweet Game Summary: Cronulla continue their good form (they've now won 3 in a row) beating an ordinary Bunnies outfit 26-4 at a well-filled Toyota Stadium.
Injuries: Jayson Bukuya (Leg), Jeremy Smith (Knee), Wade Graham (Leg)
2011 @NRLTweet Player of the Year Votes
Judge: Greg Delaney
4 - Luke Douglas, CRO
Leading from the front with 139 running metres, including 8 tackle breaks. Scored a well deserved meat pie and topped off a tremendous game with 26 tackles.
2 - John Morris, CRO
Was always a threat from dummy half, maybe his best ever game. With 1 try assist, 96 metres running metres and a team high 35 tackles Morris got the Sharks moving forward.
1 - Anthony Tupou, CRO
Making most of his starting spot Tupou created havoc for Souths on the fringes running for 129 metres, offloading 6 times including a try assist. Also put Gardner in space to set up the last try to Wright.
Judge: Matt Spillane
4 - John Morris, CRO
Did plenty of work in defence and was a menace for South Sydney out of dummy half.
2 - Chad Townsend, CRO
Another fine game from the rookie half and wasn't fazed with defensive work Souths put him under. His kicking game another highlight.
1 - Nathan Gardner, CRO
Safe as usual at the back and churned out a lazy 184 metres with the ball.
GAME HIGHLIGHTS
|-| |-| |-|

7:05pm (Local) 4 July @ Sydney Football Stadium, Sydney.
NRLTweet Game Summary: David Furner is a sly dog, said Canberra were gonna grind... Then unleashed the Raiders, who crush the Roosters 38-12 at the SFS.
Injuries: Tom Learoyd-Lahrs (Bicep), Jared Waerea-Hargreaves (Shoulder), Justin Carney (Hammy - late withdrawal)
2011 @NRLTweet Player of the Year Votes
Judge: Warrick Nicolson
4 - Josh Papalii, CAN
The Papaya King was immense in the opening exchanges and played 80 minutes for the second straight week because his coach can't take him off due to how well he keeps going. Stormed down the right side all night, scored the opening try and is a hugely exciting prospect for the Raiders.
2 - Brett White, CAN
The big unit is playing like he should be - like a big unit. Finally has had it drummed into him that in order to gain metres you must run through the line and was the foundation on which Canberra's flamboyant play stemmed from. In career best form.
1 - Sam Williams, CAN
Edges his halves partner Josh McCrone for this point because the kid has the poise of a much older player. His quick thinking for the Joe Picker try was quality and his kicking game was excellent.
Judge: Matthew Vickers
4 - Josh McCrone, CAN
Just wow. 3 try assists; 2 line break assists. Great performance, really coming into his own.
2 - Jarrod Croker, CAN
Apparently had spiders on him as the Roosters just didn't want to tackle him to the ground.5 tackle breaks; 2 line breaks; an offload; 132 metres with the ball; and just for good measure scored 2 tries and kicked 5 from 7 with the boot.
1 - Josh Papalii, CAN
This kid would run through brick walls I am sure of it. Another one that the Roosters didn’t want to tackle with 7, yes 7, tackle breaks; a line break; 17 tackles and the try that set the tempo for the match. Special mention for playing the full 80 in the forwards in only his sixth game.
GAME HIGHLIGHTS
|-| |-| |-| 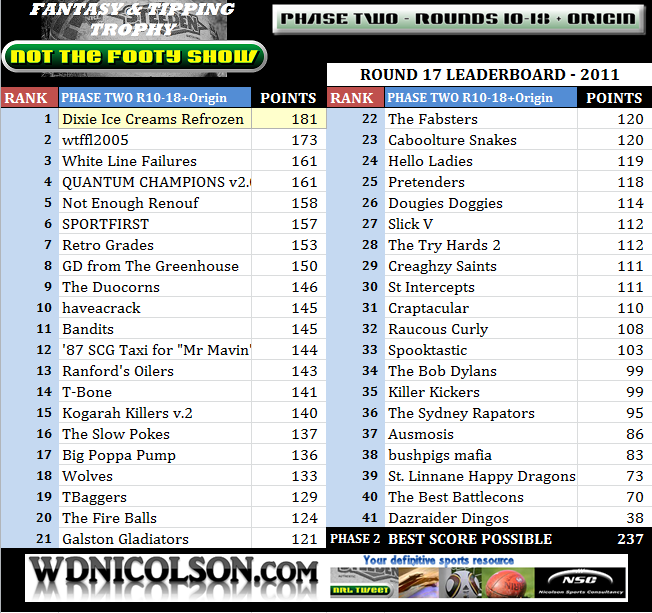 NOT THE FOOTY SHOW's EXPERT TIPS:
ROUND 17 SELECTIONS