NOT The Footy Show Episode 73

- Round 19 Preview Released July 14, 2011 -
Right Click Save Target As This Link if you don't have iTunes.
TIPPING VIDEO PREVIEW

Note: The order in which Special Fried Rice (the game we guarantee that team will win) is chosen rotates - this week Nic had 1st choice, Waz 2nd, Matt 3rd and Dave 4th. So it isn't as easy as it sounds to tip correctly each week.
You can check out who the NOT The Footy Show Experts picked for the 2011 Premiership via this link.
NOT The Footy Show Podcast is available every Thursday - subscribe now on iTunes so you don't miss out.
Check out the Round 19 Tipping Preview below...

ROUND 19 MATCHUPS
14/07 Odds are courtesy of Sportingbet Australia

Mon @ WIN Jubilee | LINE: CRO +8.0 GAME STATS
NRL TWEET PLAYER OF THE YEAR VOTES
The Leaderboard has gone silent... we will however still be posting the Votes each week in the Results Blog.

THE NRL TWEET's ROUND 19 PREVIEW

To hear the Panel's tips and why they are tipping them - listen to the Podcast or watch the Tipping Video.
Tipping + Fantasy Late Mail...
SMH and Other Late Mail 15/07 - The Bulldogs have changed coaches... assistant coach Jim Dymock comes in for outgoing head coach Kevin Moore. Both teams should be 1-17 with Steve Rapira and Grant Millington the likely 18th men. Ben Barba has a hand complaint but will play.
The NRL Tweet's Tip...

GLD: Capewell, Michaels, Toopi, Thompson, Mead, Zillman, Prince (c), Bailey, Srama, Laffranchi, Bird, Minichiello, Harrison. Bench: White, Henderson, O'Dwyer, Campbell, Lawrence.
[Team Changes - The Titans get Greg Bird back from being rested and promote Luke Capewell to fullback after the one game comeback of Mat Rogers (foot) ended and Jordan Rankin was dropped. Anthony Laffranchi has once again been named at prop with Michael Henderson going to the bench. Preston Campbell is listed to return from injury on the bench, while Esi Tonga is not recalled. ]
Wednesday Game Preview...

To hear the Panel's tips and why they are tipping them - listen to the Podcast or watch the Tipping Video.
Tipping + Fantasy Late Mail...
SMH and Other Late Mail 15/07 - The Broncos lost Scott Anderson to illness and Dunamis Lui is favoured to beat out David Hala and Nick Kenny for a spot on the bench. Brenton Lawrence is likely to get cut by the Titans if Preston Campbell is fit.
The NRL Tweet's Tip...

SYD: Graham, Perrett, Linnett, Kenny-Dowall, Leilua, T Carney, Pearce, Ryles, Friend, Myles, Anasta (c), Symonds, Nu'uausala. Bench: Mitchell, Arona, Takairangi, Guerra.
[Team Changes - The Roosters still are without Anthony Minichiello (illness) and Jared Waerea-Hargreaves was not named at all after missing last weekend with a shoulder injury. Phil Graham keeps his spot at fullback and Nate Myles shifts to the front row to accommodate Tom Symonds in the backrow. Aiden Guerra gets a recall on the bench for Mose Masoe. Mitchell Pearce has a shoulder injury but is expected to play. ]
Wednesday Game Preview...

To hear the Panel's tips and why they are tipping them - listen to the Podcast or watch the Tipping Video.
Tipping + Fantasy Late Mail...
SMH and Other Late Mail 15/07 - The Roosters won't have Anthony Minichiello due to illness and he may not be back next week either. Rhys Wesser (knee) is still no certainty to play but Nathan Merritt (wrist) and Ben Ross (Foot) should play and Shaun Corrigan could come in for Wesser.
The NRL Tweet's Tip...

To hear the Panel's tips and why they are tipping them - listen to the Podcast or watch the Tipping Video.
Tipping + Fantasy Late Mail...
SMH and Other Late Mail 15/07 - Trent Waterhouse may yet be ruled out with a knee injury and Nathan Smith would start for him if out. Jeff Robson is considered a good chance to play.
The NRL Tweet's Tip...

NQL: Bowen, Graham, Tate. Tonga, Fai-Fai Loa, Thompson, Morgan Scott (c), Payne, Tamou, Cooper, Hall, Johnson. Bench: Segeyaro, Riethmuller, A Sims, T Sims, C Paterson, W Tupou, L Ah Mau, .
[Team Changes - The Cowboys won't have Johnathan Thurston until Round 22 probably so Michael Morgan starts at halfback again. Willie Tonga has been named despite a corked thigh and will be partnered for the first time in the centres this year by Brent Tate who is back from a knee injury. Scott Bolton might be a late starter and to add to the embarrassment of riches in the backrow - Tariq Sims returns from suspension. Aaron Payne has also been named after missing the Newcastle clash with a hand injury, Clint Amos makes way as does Will Tupou. ]

To hear the Panel's tips and why they are tipping them - listen to the Podcast or watch the Tipping Video.
Tipping + Fantasy Late Mail...
SMH and Other Late Mail 15/07 - The Tigers almost had Lote Tuqiri for the trip to Townsville after he underwent a fitness test this week but talk early Friday is that Mark Flanagan will go to Townsville as the 18th man. Aaron Payne (hand) and Willie Tonga (Rib/thigh) are considered decent chances to play meaning Will Tupou, Joel Riethmuller and Leeson Ah Mau likely to miss out. Todd Payten was ruled out on Friday with Flanagan or Matt Groat to replace him.
The NRL Tweet's Tip...

MEL: Slater, Duffie, Nielsen, M Blair, Waqa, Widdop, Cronk, Bromwich, Smith (c), Norrie, A Blair, Manu, Proctor. Bench: Kostjasyn, Hinchcliffe, Woolnough, Lowe.
[Team Changes - The Storm have retained the same 17 that beat the Bulldogs in Adelaide. Sika Manu starts in the backrow and Ryan Hinchcliffe goes to the bench. There may be changes closer to kick off with a host of quality players named in the NSW Cup affiliate and Craig Bellamy loves to shuffle in order to rest players when he can. ]
Wednesday Game Preview...

To hear the Panel's tips and why they are tipping them - listen to the Podcast or watch the Tipping Video.
Tipping + Fantasy Late Mail...
SMH and Other Late Mail 15/07 - The Raiders will finally get Josh Dugan back from an ankle injury and Josh Miller will miss out on the 17. Todd Lowrie could be a late addition to the squad for Jaiman Lowe, while Anthony Quinn and Justin O'Neill are close to getting a run soon. Matt Orford could play in the Canberra Cup this weekend.
The NRL Tweet's Tip...

MAN: B Stewart, Robertson, Lyon (c), Matai, D Williams, K Foran, Cherry-Evans, King (c), Ballin, Kite, Watmough, Galuvao, G Stewart. Bench: Mauro, Buhrer, Rodney, Rose, Robinson, Lussick.
[Team Changes - Jason King has been named despite a hammy injury and is in serious doubt. Glenn Stewart played 80 minutes with his own hammy injury but should play. Steven Matai is back from suspension with Michael Oldfield making way. Darcy Lussick and Tim Robinson are the extra men on the bench. There is still no William Hopoate who is out with a hammy injury. ]
Wednesday Game Preview...

To hear the Panel's tips and why they are tipping them - listen to the Podcast or watch the Tipping Video.
Tipping + Fantasy Late Mail...
SMH and Other Late Mail 15/07 - Kurt Gidley (Hammy) is extremely unlikely to play, Richie Fa'aoso has the flu but will play and Neville Costigan (Knee) and Evarn Tuimavave (Hammy) are still in doubt. Adam MacDougall has an ongoing knee issue but despite being named on the bench could come in late for Keith Lulia. Jason King (Hammy) is in doubt for Manly.
The NRL Tweet's Tip...

STI: Boyd, Morris, Gasnier, Cooper, Nightingale, Soward, Fien, Hunt, Young, Weyman, Scott, Creagh, Prior. Bench: Green, Rein, Cuthbertson, Merrin.
[Team Changes - The Dragons are boosted by the return of Matt Cooper and Beau Scott but have lost skipper Ben Hornby with a hand injury. Given their last game was pre-Origin 3 there are a host of changes but the key INS are Brett Morris, Mark Gasnier, Darius Boyd, Jamie Soward and Ben Creagh. Nathan Fien goes to halfback for Hornby and Dean Young starts at hooker. Kyle Stanley has a groin injury so Mitch Rein is the preferred utility on the bench. ]

To hear the Panel's tips and why they are tipping them - listen to the Podcast or watch the Tipping Video.
Tipping + Fantasy Late Mail...
SMH and Other Late Mail 15/07 - The Dragons will farewell Mark Gasnier at the end of the season after he announced his retirement on Thursday. Matt Cooper is expected to return from injury, while Kade Snowden could be a late addition for the Sharks. Beau Scott is expected to play but don't be surprised if he is given another week off.
The NRL Tweet's Tip... 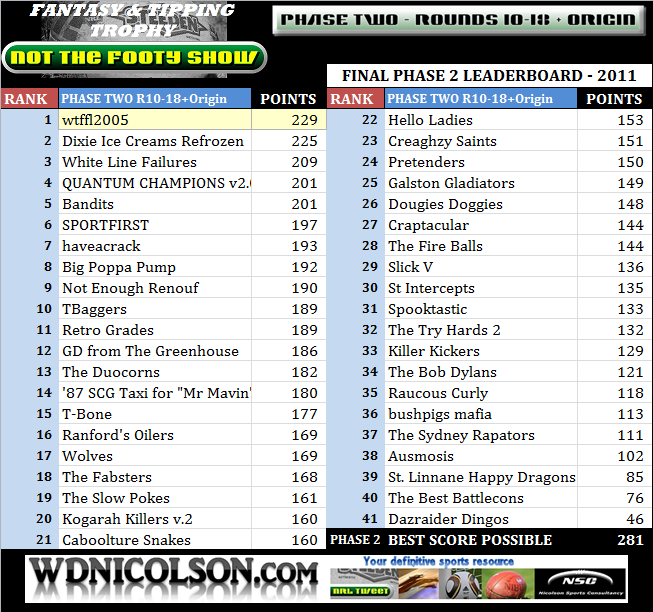 NOT THE FOOTY SHOW's EXPERT TIPS:
ROUND 19 SELECTIONS

]-[ It's not too late to join our Tipping Competition as long as you're already signed up for Tipping on the Daily Telegraph Website. We use that site because their overall prize is pretty good and you'll be on there for Super Coach anyway. Our League Code is 446386 and you can invite as many people as you want to take on the boys and girls from NOT The Footy Show.
1st Prize is an Official Steeden Match ball.
Fantasy League Enter Phase 3 Here
Phase 3 Begins in NRL Round 19 - your final chance to win some Rugby League Clothing.
SO GO OUT AND ENJOY THE FOOTY
By W D Nicolson