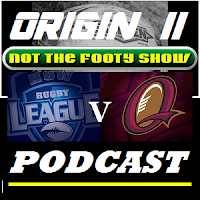 NOT The Footy Show's
State of Origin Game 2 Preview Podcast
Featuring Mark 'MG' Geyer!
Right Click Save Target As This Link if you don't have iTunes.

Listen to the State of Origin Game 2 Preview Podcast or watch the Video above.
Tipping + Fantasy Late Mail...
SMH and Other Late Mail 14/06 - Beau Scott struggled with a hamstring strain during the week but should play. Ashley Harrison has a broken nose but will play. There is a tip that Ben Creagh may go to the bench and Anthony Watmough could start for NSW.
The NRL Tweet's Tip...

Our State of Origin Prediction Game is open - enter in the comments below. 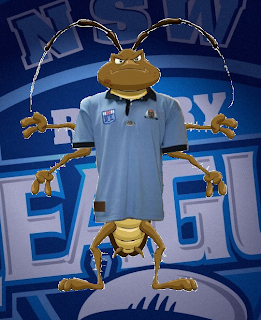 FIRST THOUGHTS 5:45pm June 5:
Poor Ricky Stuart can't make up his mind.
Every excuse he offered for the team he picked in Game 1 centred around not being interested in picking players out of position... fast forward to Game 2's side and it's an out of position fest. Injury has ruled out Brett Morris and Michael Jennings, while Josh Dugan has been named despite suffering a leg injury earlier in the day for Canberra (Anthony Minichiello comes in).
Jarryd Hayne who Stuart said is a five-eighth playing fullback comes in on the wing for Morris and Manly youngster Will Hopoate has been picked in the centres despite playing the majority of his footy this season at fullback or on the wing.
Then skipper Paul Gallen has been moved from lock forward to prop as Stuart cut his entire starting front row from Game 1. Jason King and Kade Snowden have been axed and Dean Young is also gone, as Kurt Gidley returns on the bench and Tim Mannah starts at prop. Anthony Watmough and Luke Lewis have forced their way onto the bench despite both being available in Game 1, while Ben Creagh starts in the second row and Greg Bird moves to lock.
So that's FIVE changes for the Blues after their 16-12 loss in Game 1 at Suncorp.
Nathan Hindmarsh still can't get a run despite being superhuman against the Dragons on Friday Night, while Tom Learoyd-Lahrs was not picked despite getting through his comeback game for Canberra today. Jamal Idris and Josh Morris miss out on the left centre spot with Hopoate preferred.
Tom Learoyd-Lahrs and Robbie Farah are the 18th and 19th men for NSW.

FIRST THOUGHTS 2:15pm June 7:
Greg Inglis is back!
Despite losing Willie Tonga to a long term shoulder injury the Maroons have regained their big play centre Greg Inglis and have made just one unforced change to the team that beat NSW 16-12 in Game 1 at Suncorp.
Dave Taylor returns on the bench at the expense of Jacob Lillyman who had an unhappy game at Suncorp. Lillyman is 18th man. Taylor has been a force for the Bunnies in the last month or two (his form picked up before Origin 1) and deserves his shot on the bench.
While Lillyman is 18th man, Neville Costigan could count himself a tad unlucky as he was an important part of the QLD sweep last year and not only has he returned from injury for the Knights in recent weeks - Newcastle have the bye this weekend so he was more than available.
There are no other changes for the Maroons who can wrap up a 6th straight Origin Series victory with a win at ANZ Stadium next Wednesday.
]-[ ]-[ ]-[
This website - www.wdnicolson.com - will produce a large amount of Origin centric content throughout the 2011 Series. So Bookmark this site if you haven't already.