THE NRL TWEET's ROUND 13 REVIEW

02/06 Odds are courtesy of Sportingbet Australia 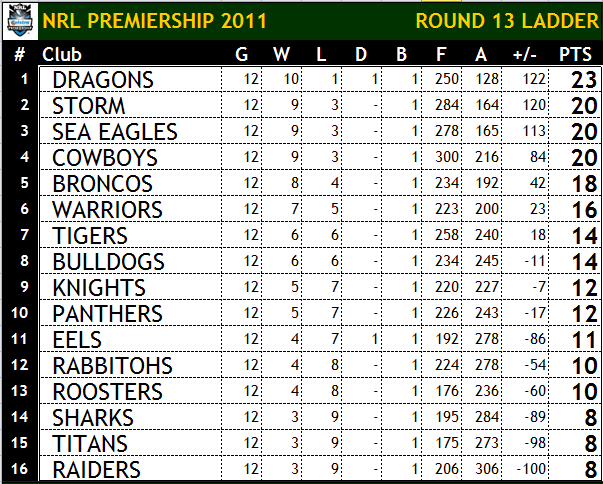 7:45pm (Local) 3 June @ Parramatta Stadium, Sydney.
NRLTweet Game Summary: Parramatta give the reigning premiers St.George-Illawarra an almighty fright at Parra Stadium, but have to settle for a 14-14 draw.
Injuries: TBA
2011 @NRLTweet Player of the Year Votes
Judge: Justin Davies
4 - FuiFui MoiMoi, PAR
Parra's surge all started with his first hit up as his energy lifted the underdogs. Scored Parramatta's first try and led the way when on the field.
2 - Jamie Soward, STI
Was the dominant force in getting the Dragons back into the game.
1 - Jarryd Hayne, PAR
Ran for over 200 metres and got involved in the match at every opportunity.
Judge: Ben Hoese
4 - Nathan Hindmarsh, PAR
Captain's workload. Strong in defence for the full 90 mins and made good metres in attack. The longer he played, the stronger he became.
2 - FuiFui MoiMoi, PAR
Made an instant impact in attack, driving the team forward. Put the Dragons on the back foot.
1 - Jarryd Hayne, PAR
Not his most spectacular game but picked it up when it counted and came close to kicking a field goal for the ages...
GAME HIGHLIGHTS
|-| |-| |-|

5:35pm (Local) 4 June @ Skilled Park, Gold Coast.
NRLTweet Game Summary: In the end the Panthers do it relatively easy at Skilled Park, beating the Titans 23-10. Ankle injury to Michael Jennings the big story.
Injuries: Michael Jennings (Ankle), Luke Walsh (Hammy)
2011 @NRLTweet Player of the Year Votes
Judge: Michael McLucas
4 - Petero Civoniceva, PEN
What more can be said about this bloke? Every hit-up had purpose and lead his team with inspiration. Could play until he's 40.
2 - Kevin Kingston, PEN
Worked hard in defence and kept the forwards rolling in the right direction. Rewarded with a try.
1 - Tim Grant, PEN
Big performance from the bench with plenty of quality metres. Top effort.
Judge: Greg Delaney
4 - Petero Civoniceva, PEN
In a scrappy game Petero did a mountain of work running for 162 metres after a short turnaround, also broke 5 tackles as well half of which when he set up Adrian Purtell's try.
2 - Tim Grant, PEN
Kept the momentum going with 137 metres which is a huge effort from the bench, also made a handy 25 tackles.
1 - Kevin Kingston, PEN
Underrated player does his job every week and this week was no different, racking up 53 tackles. The Panthers always look better when he plays the full 80 minutes.
GAME HIGHLIGHTS
|-| |-| |-|

7:35pm (Local) 4 June @ ANZ Stadium, Sydney.
NRLTweet Game Summary: Manly are awesome in disposing of the Bulldogs 38-4 at ANZ. The Sea Eagles shut down the middle, then give so much ball to their backs.
Injuries: Kris Keating (Hammy)
2011 @NRLTweet Player of the Year Votes
Judge: Maria Tsialis
4 - Jamie Lyon, MAN
It's such a shame this man has an aversion to rep footy, because NSW could greatly benefit from his skills. He's in red hot form and will be the man to take Manly into the finals.
2 - Daly Cherry-Evans, MAN
They keep finding great halves at Manly, and DCE is no exception. Easily controlled the rout and embarrassed the Bulldogs.
1 - Glenn Stewart, MAN
Not much is said about the quieter Stewart brother, but he just goes
about his business effectively. Made 160 metres and still had time for 37 tackles.
Judge: Warrick Nicolson
4 - Daly Cherry-Evans, MAN
Is making the Sea Eagles decision not to re-sign Trent Hodkinson on massive dollars look better by the week. Controlled the game and gave his outside men plenty of ball after the Manly forwards dominated the ruck.
2 - Glenn Stewart, MAN
He's a well rounded footballer who keeps putting in very good performances at club level for the Sea Eagles. This game was no exception.
1 - Jamie Lyon, MAN
He continues to be a player who can help his team win by 20 when up by 6 and on top of the physical battle up the middle. Very good footballer.
GAME HIGHLIGHTS
|-| |-| |-|

7:35pm (Local) 4 June @ Sydney Football Stadium, Sydney.
NRLTweet Game Summary: The Sydney Roosters get just their 4th win of the season, as they hold out the Warriors 13-6 at a wet SFS. Defence the story here.
Injuries: Shaun Kenny-Dowall (Ankle), Steve Rapira (Wrist)
2011 @NRLTweet Player of the Year Votes
Judge: Craig Buchanan
4 - Nate Myles, SYD
Wow just wow, played 56 mins but dominated everything for the Chooks, most meters (191), most hit ups (22), 2nd for tackles (36), most off loads (3) - the complete package.
2 - Jason Ryles, SYD
Worked hard all day, was a strong part of the defensive wall that repelled the Warriors.
1 - Aidan Guerra, SYD
A good all round game and scored a well deserved try.
Judge: Haylen Southon
4 - Jake Friend, SYD
A mammoth effort, recording more than 60 tackles for the second successive week.
2 - Anthony Minichiello, SYD
An almost vintage performance from the 'Mini of Old'. Safe at the back, and looked sharp in attack.
1 - Jason Ryles, SYD
Showed the leadership missing from Roosters in past weeks. Pulled out 60 minutes and got through plenty of work.
GAME HIGHLIGHTS
|-| |-| |-|

2:05pm (Local) 5 June @ Canberra Stadium, Canberra.
NRLTweet Game Summary: Canberra blitz the Cowboys in the opening 20 minutes to lead 22-0 in Canberra... pity the game goes for 80 as Cowboys romp home 40-24.
Injuries: Terry Campese (Groin), Josh Dugan (Ankle)
2011 @NRLTweet Player of the Year Votes
Judge: Matthew Vickers
4 - Tariq Sims, NQL
Scored two tries, set up two tries; was involved in just about everything.
2 - Johnathan Thurston, NQL
Sublime performance from about the time Neil Henry went to the sideline with the Cowboys down 22-0.
1 - Josh McCrone, CAN
A lot of judges will over look his performance, in particular just how good he was for the first quarter of the game.
Judge: Warrick Nicolson
4 - Tariq Sims, NQL
A day after Daly Cherry-Evans had seemingly made the Rookie of the Year Award a two horse race with William Hopoate - Sims produced one of the best games by a forward this year - let alone by a rookie. His line running paid off in a big way - scoring a sensational 50m try from halfway before halftime before his footwork (again from halfway) put Aaron Payne over for the match winning try. Superb.
2 - Johnathan Thurston, NQL
The best player in the game right now... I've often thought he was always a floater in the Top 5 but his form this year behind a North Queensland pack that is standing up has been second to none. Sims was the game breaker but Thurston was the architect of a 0-22 comeback.
1 - Matthew Bowen, NQL
Makes such a difference with his presence on the field for the Cowboys. Then comes up with plays like rounding up and sending Blake Ferguon into touch with the game still there to be won with 7 minutes left.
GAME HIGHLIGHTS
|-| |-| |-|

3:05pm (Local) 5 June @ ANZ Stadium, Sydney.
NRLTweet Game Summary: South Sydney really take it to the Storm but can't find the vital points to overcome them. Melbourne eventually win 16-6 at ANZ.
Injuries: TBA
2011 @NRLTweet Player of the Year Votes
Judge: Nigel Wilbow
4 - Cameron Smith, MEL
All class, kicking, passing and defence. controlled the game for the Storm from dummy half.
2 - Dave Taylor, SOU
Was in everything for Souths including leaping to catch a bomb to score their only try. His size and skill had the Storm defence on the backfoot.
1 - Billy Slater, MEL
Typical Slater game, safe as a bank, hanging around the rucks in attack and troubled the Rabbits defence at times, had a great battle with his opposite number Wesser.
Judge: Matt Spillane
4 - Dave Taylor, SOU
Just about took on the Storm by himself. 27 tackles, 136 metres, 2 offloads, a try and was denied what looked like a fair try.
2 - Cameron Smith, MEL
Typical workmen like Smith performance. 48 tackles, 116 metres and scored the match winning try.
1 - Sisa Waqa, MEL
Very productive day from the winger. 182 metres, 2 linebreaks and an offload.
GAME HIGHLIGHTS
|-| |-| |-|

7:05pm (Local) 6 June @ Leichhardt Oval, Sydney.
NRLTweet Game Summary: Wests Tigers get a Robbie Farah field goal in 2nd period of Extra Time to beat a gallant Knights outfit 17-16 at Leichhardt.
Injuries: Lote Tuqiri (Leg)
2011 @NRLTweet Player of the Year Votes
Judge: Dane Neville
4 - Chris Heighington, WTG
From his first run to the very last run of the game, he was awesome. Too strong up the middle for the Knights.
2 - Akuila Uate, NEW
Played like a forward with his hard runs a handful for defenders all night. A constant threat but placed on report late for a spear tackle on Tigers rookie Tim Simona.
1 - Blake Ayshford, WTG
His best game in a long time, the Knights couldn't tackle him as he broke the line almost at will.
Judge: Warrick Nicolson
4 - Robbie Farah, WTG
Won the game for the Tigers - simple as that. Not his sharpest game out of dummy half but he wins games for his team and tonight was no exception as he potted a field goal from dummy-half in the 2nd period of extra time.
2 - Chris Heighington, WTG
If only he had a support player or two run off his 20+ runs all night - the Tigers might not have needed extra time. Has almost perfected the hit and spin.
1 - Kurt Gidley, NEW
Just edges Chris Houston for the single point. Is such an influential player at club level and his work one off the ruck was excellent tonight. Set up one try but also dropped the match with 10 seconds left - as he was lined up for an easy drop goal to win the game but spilt the pass to send the game into extra time.
GAME HIGHLIGHTS
|-| |-| |-| 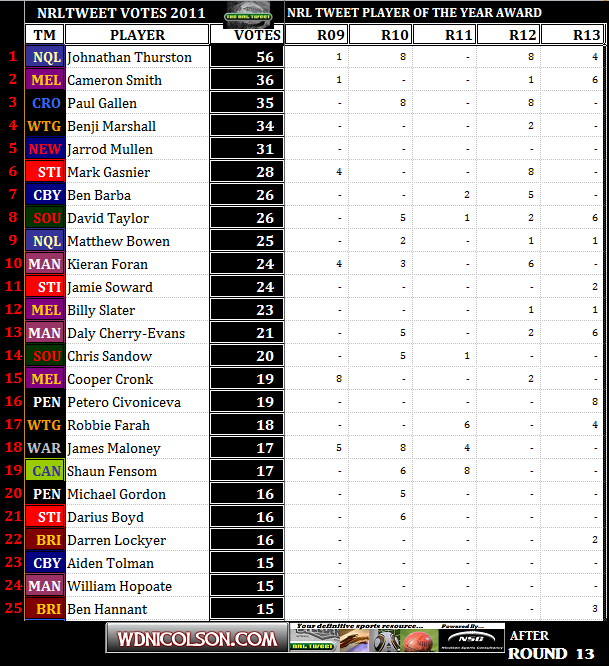 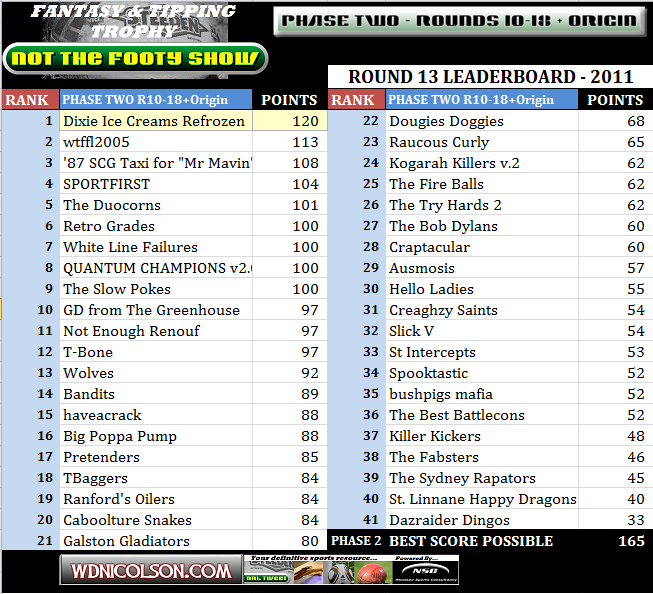 NOT THE FOOTY SHOW's EXPERT TIPS:
ROUND 13 SELECTIONS