THE NRL TWEET's ROUND 15 REVIEW

16/06 Odds are courtesy of Sportingbet Australia 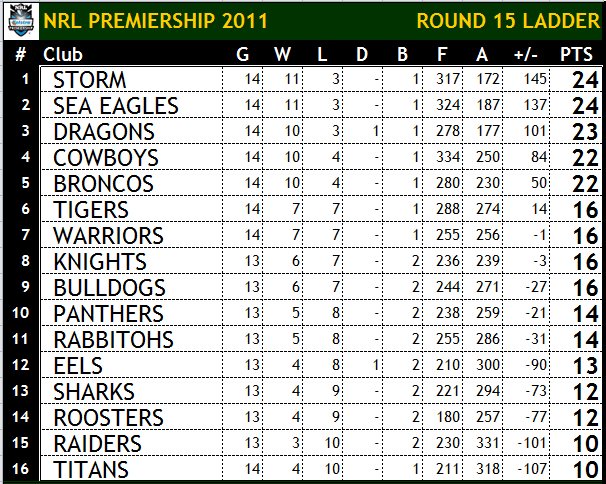 THE NRL TWEET's ROUND 15 REVIEW

7:45pm (Local) 17 June @ Suncorp Stadium, Brisbane.
NRLTweet Game Summary: Brisbane start slowly but build up a 14-4 lead by halftime over the Dragons and hold the premiers out to win 21-14. Lockyer outstanding.
Injuries: Ben Hornby (Knee), Darren Lockyer (Eye)
2011 @NRLTweet Player of the Year Votes
Judge: Matthew Duncan
4 - Darren Lockyer, BRI
Was good all night but was at his best  when the Dragons looked to be coming home over the top of the Broncos. The master takes control. A brilliant 40/20, set ups the try. If that wasn't enough he put the game away with a tricky field goal.
2 - Jack Reed, BRI
Continues to develop at an amazing rate. Caused the Dragons defence headaches all night, scored a try and defended very well.
1 - Ben Hannant, BRI
Super work rate. 54 tackles and 17 hit ups. Playing with great enthusiasm.
Judge: Matthew Vickers
4 - Darren Lockyer, BRI
A masterful display just 48 hours after origin. The 40/20 kick was outstanding and set up the try which ultimately took the wind out of the sails of the Dragons (and their fans).
2 - Ben Hannant, BRI
Had 124 metres from 17 carries and made 54 tackles; playing 63 minutes backing up from Origin 2. A busy performance which set the ground work and space for Lockyer to put on his show.
1 - Josh Hoffman, BRI
His kick return metres gave the Broncos a good start to most sets; meaning the tired forwards didn't have to get back as far to get on side.
GAME HIGHLIGHTS
|-| |-| |-|

7:45pm (Local) 17 June @ ANZ Stadium, Sydney.
NRLTweet Game Summary: Souths looked like they had the game won up 14-0 at HT, let the Titans back in it but then romp home 31-8 in front of 10 people at ANZ.
Injuries: Ryan James (Knee), Luke Bailey (Ankle), Mark Minichiello (Shin), Anthony Laffranchi (Ankle), Scott Prince (Arm), Chris McQueen (Head)
2011 @NRLTweet Player of the Year Votes
Judge: Justin Davies
4 - Chris Sandow, SOU
Whenever Souths win, it seems he's instrumental and was no different on Friday.
2 - Issac Luke, SOU
Anything good produced by Sandow, came off this man. He gets their sets started with quick darts and passing.
1 - Dave Taylor, SOU
Realised he was big and strong a few times, just took the wrong option. He's warming into the competition and will be a weapon if Souths make the finals.
Judge: Greg Delaney
4 - Dave Taylor, SOU
Massive game from the Coal Train. Running 167 metres breaking 6 tackles in the process. He was terrorised the Titans and got the Rabbits rolling forward.
2 - Chris Sandow, SOU
Controlled game from Sandow. Had one try assist and an excellent kicking game - including the field goal that sealed the deal late.
1 - Issac Luke, SOU
Running over 100 metres from dummy half and making a team high 26 tackles, Luke had the Rabbits in control of this game.
GAME HIGHLIGHTS
|-| |-| |-|

5:35pm (Local) 18 June @ AusGrid Stadium, Newcastle.
NRLTweet Game Summary: Kurt Gidley controls the final 5 minutes of the game superbly as Newcastle hold on to beat Penrith 16-12 at AusGrid. Uate also strong.
Injuries: TBA
2011 @NRLTweet Player of the Year Votes
Judge: Rob Neilsen
4 - Kurt Gidley, NEW
Steered the team in all the right directions in a tight game, kicking two penalty goals that made the difference on the scoreboard.
2 - Masada Iosefa, PEN
Best for the Panthers, keeping Newcastle on their toes with two tries, some good offensive bursts, and 28 tackles.
1 - Joel Edwards, NEW
Once again, a stand out defensive game, making some spectacular tackles!
Judge: Michael McLucas
4 - Neville Costigan, NEW
Good tough performance out wide and showed good brains to strip the ball one-on-one in the lead-up to the first try, which he scored!
2 - Kurt Gidley, NEW
Steered the ship well particularly late in the game when the Knights managed repeat sets ensuring the Panthers couldn't get a sniff. Kicking game superb.
1 - Masada Iosefa, PEN
No standouts for the Panthers but this bloke scoring 2 tries to keep them in the game earns him a point.
GAME HIGHLIGHTS
|-| |-| |-|

7:35pm (Local) 18 June @ Dairy Farmers Stadium, Townsville.
NRLTweet Game Summary: A breakout performance from Kalifa Fai-Fai Loa and some same old same old from Johnathan Thurston sees Cowboys run over Warriors 30-10.
Injuries: Johnathan Thurston (Ankle), James Tamou (Shoulder - late withdrawal), Aaron Payne (Leg), Tariq Sims (Knee)
2011 @NRLTweet Player of the Year Votes
Judge: Warrick Nicolson
4 - Kalifa Fai-Fai Loa, NQL
The Fe Fi Fo Fumster is making people take notice. Somehow found himself behind Michael Bani at the start of the year but has been huge for the Cowboys since breaking into first grade. Scored two tries and set up two more but his work-rate coming out of trouble was his best asset.
2 - Johnathan Thurston, NQL
Picked the Warriors apart when the game was in the balance early in the second half. After scoring a try he hurt his ankle but played through discomfort to set up what ended up being a big Cowboys victory. Also put referee Matt Cecchin on the floor with a crunching tackle that attracted some NRL Jokediciary scrutiny.
1 - Matthew Scott, NQL
Backed up from Origin 2 and really put in for his side that lost two key forwards before kick off in Scott Bolton and James Tamou. His second stint just before halftime was superb and his efforts in the second half were outstanding. Unlucky to just get the one vote.
Judge: Craig Buchanan
4 - Kalifa Fai-Fai Loa, NQL
Had a big impact in the match scoring and setting up tries, taking hit ups and making tackles, he was involved the entire night.
2 - Johnathan Thurston, NQL
Sparked in the second half to help the Cowboys score their five 2nd half tries and run away with the game.
1 - Shaun Johnson, WAR
Twice broke the cowboys line with ease, repeatedly troubled the Cowboys with his left foot steps, and scored a brilliant 65m solo try.
GAME HIGHLIGHTS
|-| |-| |-|

2:05pm (Local) 19 June @ ANZ Stadium, Sydney.
NRLTweet Game Summary: Cronulla actually play some attractive football on their way to beating a very ordinary Canterbury unit 26-10 at ANZ.
Injuries: Paul Gallen (Cheekbone)
2011 @NRLTweet Player of the Year Votes
Judge: Dane Neville
4 - Paul Gallen, CRO
What a freak of a player. Played all 80 minutes scored a try and set another one up.
2 - Nathan Gardner, CRO
Back from injury and his speed adds so much to the Sharks. Scored a try.
1 - Wade Graham, CRO
Played one of his best games for the Sharks this year, and bagged a try to finish the game off.
Judge: Maria Tsialis
4 - Kade Snowden, CRO
Snowden made a massive 200+ effort and absolutely monstered the Dogs' defence. He clearly desperately wants his Origin jersey back and after this effort he might just get it.
2 - Paul Gallen, CRO
Is there anything this man can't do? He is an absolute machine.
1 - Andrew Ryan, CBY
There was an unfortunate banner calling Ryan undedicated but that couldn't be more wrong. Game after game he is the only one putting his hand up and going forward for the Dogs.
GAME HIGHLIGHTS
|-| |-| |-|

3:05pm (Local) 19 June @ Leichhardt Oval, Sydney.
NRLTweet Game Summary: Cooper Cronk's is superb as Melbourne defeat the Wests Tigers 12-4 at Leichhardt. Storm just that little bit better in every department.
Injuries: Sika Manu (Nose), Benji Marshall (Knee)
2011 @NRLTweet Player of the Year Votes
Judge: Ben Hoese
4 - Cooper Cronk, MEL
Led the Storm to victory, despite the team looking tired, over the Tigers at Leichhardt. Kicked a pair of 40/20's in the opening 4 minutes to have Melbourne on the front foot early.
2 - Kevin Proctor, MEL
Provided the Storm some strong go forward and found the gaps on the edges. Runs like a back.
1 - Adam Blair, MEL
Made a statement up front with his go forward, and creative defensive plays.
Judge: Matt Spillane
4 - Cooper Cronk, MEL
With Smith starting from the bench, took more control of the Storm attack and set the tone early with 2 40/20's within 4 minutes.
2 - Kevin Proctor, MEL
Continues to improve each week, and proved a real handful for the Tigers defence. Bagged a well earned try too.
1 - Gareth Ellis, WTG
As usual a tireless display from the Englishmen with 35 tackles and over 120 metres run.
GAME HIGHLIGHTS
|-| |-| |-|

7:05pm (Local) 20 June @ Brookvale Oval, Sydney.
NRLTweet Game Summary: Cracking game of footy at Brookvale. Parramatta have the better of the 2nd half but Manly produce the big play in 77th min to win 22-18.
Injuries: Joe Galuvao (Hand), Tony Williams (Hammy)
2011 @NRLTweet Player of the Year Votes
Judge: Haylen Southon
4 - Jarryd Hayne, PAR
Set up Parra's first try, provided 2 line breaks, a 40/20. Definitely one of his better games in recent times.
2 - Brett Stewart, MAN
Had 2 Line breaks, a try assist and a try. Looked sharp throughout.
1 - Nathan Hindmarsh, PAR
Usual high tackle count, backed up with a handful of offloads and plenty of hit ups.
Judge: Warrick Nicolson
4 - Brett Stewart, MAN
A huge first half from the Manly fullback. Great to see him run off his brother on the right edge - the speed that made him a star looks to be slowly coming back. Played an important part in the match winning try as well.
2 - Jarryd Hayne, PAR
He's one of the few players in the game that can drag a team back into a game, win a game or save a game for his side. He did the former here as Parramatta's 2nd half performance came so close to beating Manly at Brookvale. His passing game was superb and his 40/20 (on the back of a few failed attempts before hand) showed just what a talent he is.
1 - Glenn Stewart, MAN
Adds that touch of class to the Manly right edge that makes them such a balanced attacking unit. Sent his brother through a gap twice and his defence was once again excellent.
GAME HIGHLIGHTS
|-| |-| |-| 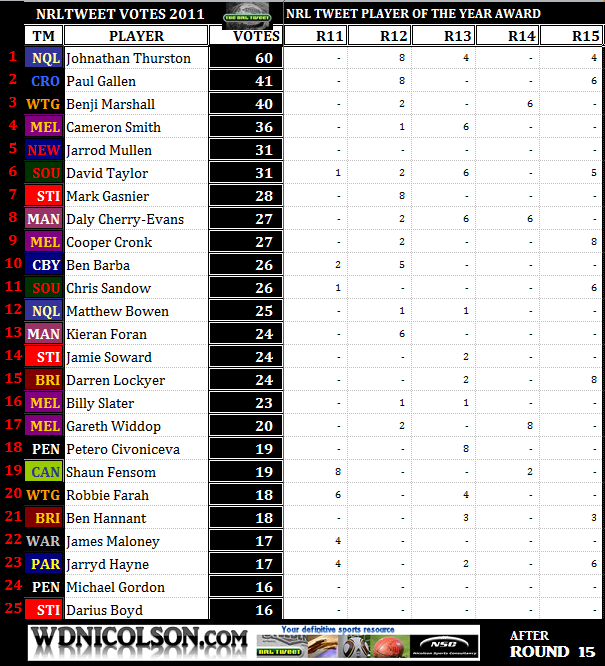 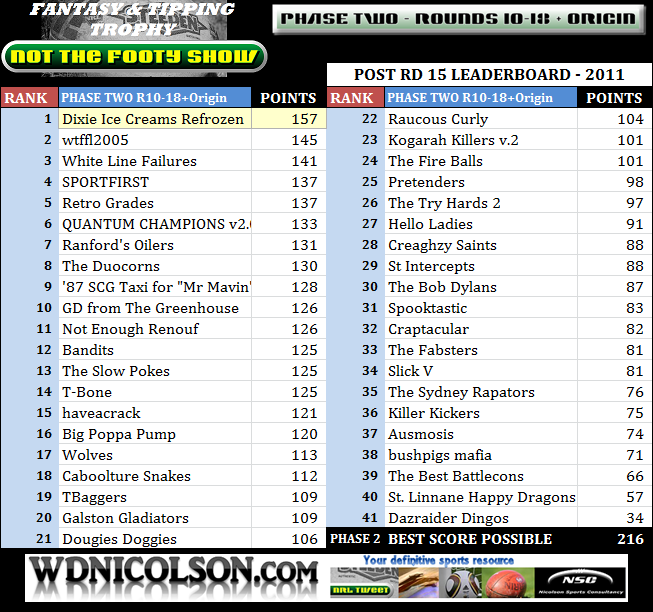 NOT THE FOOTY SHOW's EXPERT TIPS:
ROUND 15 SELECTIONS