THE NRL TWEET's ROUND 14 REVIEW

09/06 Odds are courtesy of Sportingbet Australia 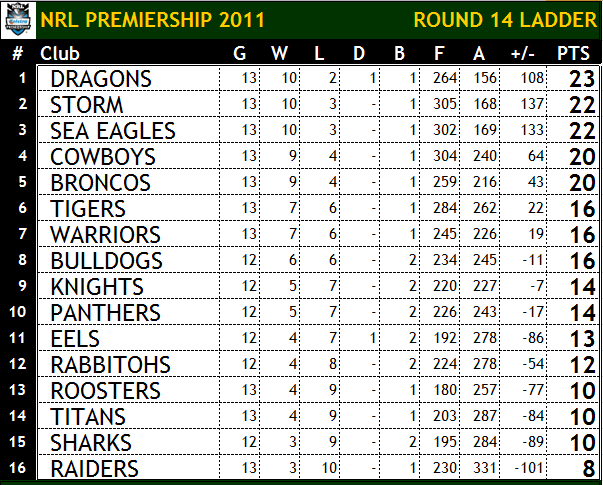 7:45pm (Local) 10 June @ WIN Jubilee Stadium, Sydney.
NRLTweet Game Summary: Dragons show some flair down on troops but Titans get 4th win of the season 28-14 at WIN Jubilee. Game changes on dodgy video ref call.
Injuries: Ben Hornby (Ankle), Adam Cuthbertson (Neck), Dean Young (Knee)
2011 @NRLTweet Player of the Year Votes
Judge: Matt Spillane
4 - Matt Srama, GLD
Was a menace for the Dragons in attack and defence, and support play was excellent. Scored a try and made 120m.
2 - Luke Bailey, GLD
Typical workman like performance from Bull. 24 tackles, 186m and always led the kick chase for the Titans.
1 - Alex McKinnon, STI
Great game on debut. scored a double and had a field day on the right side.
Judge: Greg Delaney
4 - Luke Bailey, GLD
Evergreen prop worked hard all night making 194 metres for the Titans and making 23 tackles to boot.
2 - Matt Srama, GLD
Boom youngster ran for 118 metres and tackled everything that moved, adds so much energy to this aging team. Also got a handy try that sealed the game.
1 - Jason Nightingale, STI
Filled in admirably at fullback running 177 metres at the back and setting up 2 tries for the Dragons.
GAME HIGHLIGHTS

7:35pm (Local) 11 June @ Brookvale Oval, Sydney.
NRLTweet Game Summary: Manly score 2 early tries & are never headed as they beat the Cowboys 24-4 at Brookvale. Sea Eagles cut Dragons Minor Premiership lead to 1 point.
Injuries: Jason King (Ankle), Antonio Winterstein (Pectoral)
2011 @NRLTweet Player of the Year Votes
Judge: Maria Tsialis
4 - Steven Matai, MAN
Someone must have given Steve angry pills before the game. He was barging in his runs and smashing people in defence. Also as a bonus for Manly fans, he didn't come off injured.
2 - Daly Cherry-Evans, MAN
This kid has to be rookie of the year. His kicks are on point, he directs the team extremely well, and he seems completely non affected by pressure.
1 - Brett Stewart, MAN
Stewart looks like he's almost at full stretch, and after bagging another double, this spells trouble for the rest of the competition.
Judge: Justin Davies
4 - Daly Cherry-Evans, MAN
Striking up quite the combination with his backline especially Brett Stewart. His kicking game created several tries tonight.
2 - Joe Galuvao, MAN
In the absence of Watmough, he stepped up and was a wrecking ball on every run.
1 - Brett Stewart, MAN
Slowly getting back to his best, swooped on two tries and got involved quite a bit from fullback.
GAME HIGHLIGHTS
|-| |-| |-|

2:05pm (Local) 12 June @ Suncorp Stadium, Brisbane.
NRLTweet Game Summary: Brisbane almost blow a 24-0 lead with 17 mins left, as Canberra led by Josh Papalii mount a stunning comeback. Broncos win 25-24 in ET.
Injuries: Jarrod Croker (Thigh)
2011 @NRLTweet Player of the Year Votes
Judge: Warrick Nicolson
4 - Josh Hoffman, BRI
Makes a big difference to the Brisbane side when he's at fullback. Although the Raiders almost stole the match - his try in the 49th minute looked every bit the sealer. Also produced a run that set up Peter Wallace's match winning field goal in Extra Time.
2 - Shaun Fensom, CAN
Lock forwards are supposed to get through a lot of defensive work but despite his customary thousand tackles, Fensom's got a motor that allows him to not only take the ball up but run with his other forwards as support. Turning into a fine footballer.
1 - Josh Papalii, CAN
Changed the game with his back to back tries with deft footwork near the line and all of a sudden the Raiders were a hope. Also made a great covering tackle on Jack Reed with the game in the balance. Not bad from the 'Papaya King'.
Judge: Matt Duncan
4 - Josh Hoffman, BRI
Very safe at the back and made plenty of ground with his kick returns. Scored a good try and made an all important break in Extra time to get the Broncos in good field position for the field goal.
2 - Josh Papalii, CAN
Had the Broncos defence in a daze as he he scored 2 tries and Nearly pulled off a miracle win for the Raiders. Was good in defence also making some key tackles.
1 - Peter Wallace, BRI
Steered the young Broncos side around the park well and then come up with the clutch play when it was needed to win the game.
GAME HIGHLIGHTS
|-| |-| |-|

4:05pm (Local) 12 June @ Mt Smart Stadium, Auckland (AEST 4pm Replay on Channel 9).
NRLTweet Game Summary: Warriors cruising up 22-4 with 17 mins left - are run down by an incredible surge by Tigers who score 4 tries before FT to win 26-22.
Injuries: Micheal Luck (Knee), Robert Lui (Wrist)
2011 @NRLTweet Player of the Year Votes
Judge: Craig Buchanan
4 - Blake Ayshford, WTG
Scored a try, set up another and made several good runs that broke the line.
2 - Benji Marshall, WTG
Set up the Tigers comeback. Scored a double and had a hand in everything else.
1 - Kevin Locke, WAR
Had a strong running game with line breaks, great tackles, and scored a try.
Judge: Ben Hoese
4 - Benji Marshall, WTG
Fired up to lead the team to victory against all odds. Best time wasting play ever to end the game (he ran the ball dead in goal from a play the ball 35m out from the line).
2 - Feleti Mateo, WAR
Constantly looking for offloads and opportunities. Good support play, set up two tries.
1 - Blake Ayshford, WTG
Strong attacking play. Dangerous with every touch making 8 tackle busts and 3 linebreaks.
GAME HIGHLIGHTS
|-| |-| |-|

7:05pm (Local) 13 June @ AAMI Park, Melbourne.
NRLTweet Game Summary: Melbourne withstand an early push by the Roosters, then look the far better team in the 2nd half as they win 21-4 at AAMI Park.
Injuries: Sam Perrett (Ankle - late withdrawal), Beau Champion (Shoulder)
2011 @NRLTweet Player of the Year Votes
Judge: Matthew Vickers
4 - Gareth Widdop, MEL
An outstanding display. Controlled the team well in attack, really showed how dangerous the Storm will be in the back half of 2011 with a great 1,6, 7 and 9; teams will struggle defensively against the creative firepower they have.
2 - Maurice Blair, MEL
Laid on the second try for the Storm with a great in and away followed by good pass selection.  Demonstrated why he was part of Mals Emerging QLD squad.  Supported the halves well; taking some of the pressure off them at critical times.
1 - Braith Anasta, SYD
Tried his heart out, but just didn't have the cattle to join him in the fight. Hard
to rally the troops when the troops just aren't up to it. Threw a beautiful
ball for the Roosters only points in the match.
Judge: Nigel Wilbow
4 - Gareth Widdop, MEL
Played at halfback and ran the show for the Storm, in everything in attack. Kicked 4 from 5 and also had a Field Goal.
2 - Sika Manu, MEL
Had 14 tackles, 15 hitups for 163 metres with 3 offloads, laid a foundation for his halves after be promoted from the bench to start.
1 - Maurice Blair, MEL
Setup the first try, ran hard and kicked well in general play after being moved from the centres to the halves.
GAME HIGHLIGHTS
|-| |-| |-|

8:05pm (Local) 15 June @ ANZ Stadium, Sydney.
NRLTweet Game Summary: NSW 18 QLD 8... that is all.
Injuries: William Hopoate (Hammy), Luke Lewis (Hammy), Ben Creagh (Ankle), Trent Merrin (Back), Beau Scott (Ear/Knee), Sam Thaiday (Groin), Corey Parker (Groin), Greg Inglis (Shoulder)
2011 @NRLTweet Player of the Year Votes
Judge: Warrick Nicolson
4 - Paul Gallen, NSW
While everyone needs to remember there have been 80 minute front rowers before - Gallen was immense for the Blues up front. Played all 80 minutes and just kept going - evidenced by his two hitups in the Blues 79th minute set after sealing the game with Minichiello's try. Final stat line was 31 tackles, 27 runs for 204 metres with 3 offloads. The best on the field by a distance.
2 - Akuila Uate, NSW
He was NSW's second best forward behind Gallen... yes he is a winger. Did a huge amount of work in the first half when the Blues needed some drive to open their sets and his first and last run had the same amount of effort. Had some moments in genuine attack as well - well worth the punt the NSW selectors took on him this year.
1 - Luke Lewis, NSW
Made an immediate impact when injected for Trent Merrin (who never saw the field again) by leaping above the pack to take a Mitchell Pearce kick and get the Blues on the board before halftime. Threw himself into the contest and his covering tackle on Cooper Cronk was a sight to behold. Just edges out Anthony Minichiello for a point.
Judge: Matthew Duncan
4 - Paul Gallen, NSW
Just kept coming and coming and coming all night at the Maroons. Won the battle of the forwards for the Blues which laid the platform for the victory. His captaincy get an A+ also, in the referees ear all night and definitely influenced some decisions.
2 - Anthony Minichiello, NSW
Was not only safe at the back but looked dangerous with every kick return. Topped off the performance with the match sealing try.
1 - Luke Lewis, NSW
A super footballer - Brings so much to every team he plays in. Scored a great try and pulled off a great tackle on Cronk.
GAME HIGHLIGHTS
|-| |-| |-| 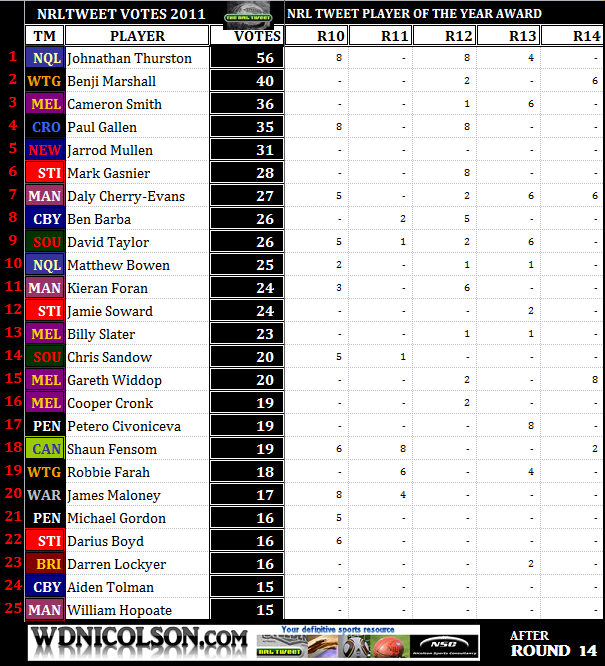 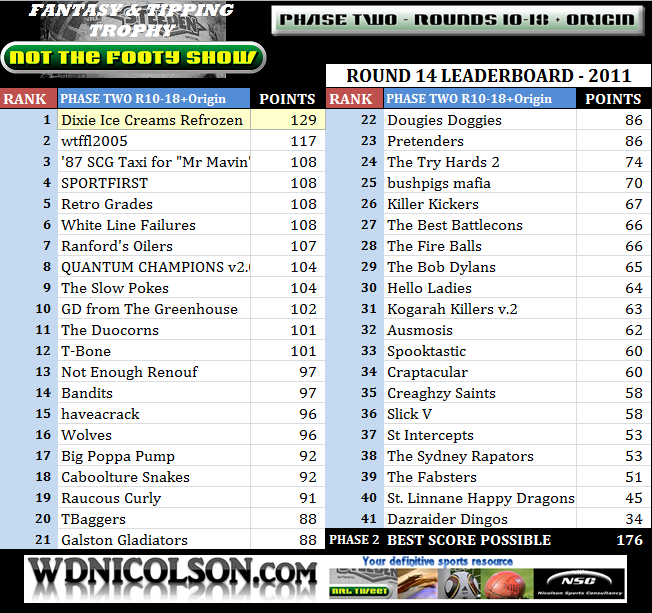 NOT THE FOOTY SHOW's EXPERT TIPS:
ROUND 14 SELECTIONS