NRL 2013: Round 2 Set of 6 Quotes and Selective Refs | #NRLTweetPOTY Votes

ROUND 2 SET OF 6: Favouritism reigns
Round 2 News and Views plus @NRLTweet Player of the Year Votes

By W D Nicolson - March 19, 2013
Follow @NRLTweet
This is a new feature on www.wdnicolson.com - every week we will post a Set of 6 Tackles that form a Complete Set by the end of the Round. It also features Votes from Round 2 of The @NRLTweet Player of the Year Awards. Let us know what you think @NRLTweet

Round 2 was the domain of the favourites...
Think that will continue?

Well judging by what we've seen in the first couple of weeks - here's an emphatic YES to the above question.

Every favourite got the cash in Round 2 - including the indomitable Melbourne Storm in Townsville (why do we keep tipping against them at the start of a season?) - and three teams fell to 0-2 on the season.

The Warriors at least gave a decent account for themselves against the Roosters (who should never have lost that game once they had the lead, but did their best to welcome the Warriors back into the contest in the 2nd half) but are still winless, while the Dragons and Jamie Soward were abysmal in attack hosting the Broncos in Wollongong.

That left the Raiders to stink up the joint on the Gold Coast - capitulating to the impressive Titans (who had ALL the ball in the first half) and shattering any expectations of their fanbase that 2013's start might be a positive one under David Furner.

@NRLTweet Player of the Year - Round 2 Voting
All Voting Results for the previous weekend of football is below.

On the tipping front www.wdnicolson.com steered you towards 5 winners from 8 games, though Channel Nine's Jake Hauritz from our 'Awesome Foursome' Tipping Panel scooped the round... by picking 8 favourites. The FootyTab results however were more of a mixed bag - as they normally are - but I can report that if you followed our Special Fried Rice picks - all four experts got the cash... or the rice as it were.

Remember to tune into www.wdnicolson.com every Wednesday night for our Tipping Preview with all that Latest of Late Mail you've come to know and love (and google search for every week).

This week's Set of 6 saw the 1st and 2nd Tackles published on Friday and Saturday looking at the Eels and Dragons, while the rest of Round 2's Complete Set is below.

Would love to get your feedback on the topics we raise - simply comment below or reply on Twitter. 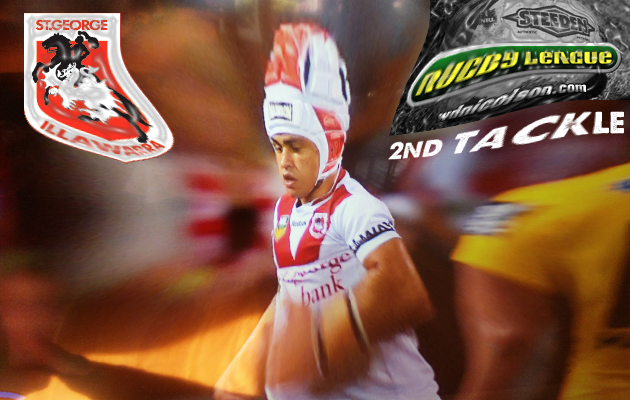 2ND COMPLETE SET:
Round 2 - Six points that emerged from a four day footy week.
A tip of the hat to the SMH's 'Set of 6' and Andy Wilson's 'Set of 6' for the name, as Complete Set just doesn't roll off the tongue quite as well, and well call it flattery that you've already used it.
CURRENT NRL LADDER

FIRST TACKLE - Parramatta can't make the playoffs...
What are the two conditions that have to be met for the Eels to prove this statement false? Click here to find out.

SECOND TACKLE - Soward is the problem, not Fien.
The Dragons might be struggling to post points but it's Jamie Soward who is letting his team down, not Nathan Fien. More on that here.

THIRD TACKLE - James Segeyaro is on fire, but what does that mean for Kevin Kingston?
Kingston was Penrith's best player last year, but in the space of two weeks - Segeyaro has supplanted the Penrith skipper as their best hooker.
It's not Kingston's fault - he still offers the Panthers experience and consistency that Ivan Cleary's squad needs, but Segeyaro offers the strikepower the team might need even more with him regularly on the field.
So what to do?
Well Clearly has shown his hand in both games so far - starting Kingston and then bringing Segeyaro on after about 20 minutes and playing him for the rest of the match. Kingston is likely to reprise his Round 1 role of playing in the forward pack when he returns to keep Segeyaro on the field.
If Segeyaro continues to play like he has so far - Cleary's on a winner here.
The only loser is Kingston in terms of minutes played, but he's such a pro he puts the team first and Penrith are a better club because of it.
How many other NRL players would have that kind of attitude?

For The Postman's analysis of each team for Round 3, with our NRL Dream Team and NRL Super Coach tips for players you need to consider/ignore from each side - click here.

FOURTH TACKLE - Quotes of the Week: Round 2
"Your biggest fear coaching the Knights is which team gets off the bus," Wayne Bennett after Manly crushed the Knights 32-0.
"I've got to put a report to Dave Smith (NRL CEO) on Monday with some background about Josh's continuous breaches of our code over the years," David Furner admits there's a lengthy history to Josh Dugan's sacking from the Raiders.

"Duges is a great player, and people need to get behind him now - he needs the support at this moment," Gold Coast reclamation project Albert Kelly might not be referring to a new contract here...

Seen a good quote in the last few days? Please direct us to this spun gold by replying on Twitter.

FIFTH AND LAST - Is Sam Williams pricing himself off the market?
The Canberra halfback did a fine job at the back end of 2012 once David Furner loosened the shackles on the game plan but he begin the 2013 campaign declaring that he'd hit the open market if Canberra didn't come to the party with a new contract.
And he was entirely within his rights in saying that... but then he stunk it up deluxe in the first two games of the season and the Raiders - a Top 4 darling in the minds of some - are 0-2 and in damage control after the opening fortnight.
Williams is a complementary half, he can look after his side of the field, kicks long well and is good at taking a smart option in general play... but he's not a take charge type. Well not based on his start this season.
It is NOT entirely his fault, as Canberra coach David Furner mistakenly believes in steady as she goes game plans in the opening few months of a season is how you make the Finals... only to realise halfway through having lost 66% of your games that perhaps a more attacking approach might suit your side... and well you know what Canberra have done in recent seasons with their playoff hopes on the line.
A kid like Williams thrived in an attacking environment behind a pack making metres late last year .. but really what half decent playmaker doesn't?
But the reason Williams should be under pressure to hold his first grade spot - even before Terry Campese is ready to return - is that his performance against the Titans in particular was woeful.
He didn't run the ball, didn't chase the ball, didn't look for the ball... and even when Canberra were in the attacking 20m zone - he went into safety first game plan mode - turning a forward back inside for a settler... getting 'ready' for Canberra's big play in the set... a kick (a poorly placed one) to the corner where his winger was stuck in the field of play heading towards the sideline...
Look - Williams has a future in the NRL, he might even turn it all around and lead the Raiders to victory on Sunday night (they are playing the Dragons after all) but his effort in particular has been tough to watch in the opening weeks - especially when his agent is asking for big bucks on the open market.
And it's not like Canberra don't have a talented playmaker or two in the system...

CHANGEOVER - Can we please kick the ball on the mark?
This is the final point that needs to be made in this Set of 6 and it surrounds the ridiculous disparity between how NRL Referees police line drop outs and kick-offs... and kicks for touch.
Watch ANY game from the previous weekend - or the last hundred years of Rugby League for that matter - and ask yourself - why do referees let players kick for touch two or more meters OVER the mark where the penalty is given (yet are stringent on taps that they are ON the mark) - when they will penalise any player for kicking the ball past the goal-line with a drop-out or if any player is in front of the kicker from halfway or on the goal-line?
Food for serious thought Daniel Anderson... especially when in the example above - Canberra were penalised from halfway for their restart kick going over the deadball line by a couple of metres, then Aidan Sezer walked well over halfway to kick for touch and that extra metre or so might have been the difference between Edrick Lee knocking the the ball back into the field of play... instead it bounced on the sideline and the Titans had the scrum feed.
Try telling me that extra metre or so from Sezer wasn't the difference in that play?

@NRLTweet Player of the Year Award
Round 2 Votes

This is how the votes were allocated in Round 2.