SEASON OPENER BRINGS HOPE
Plus our Premiers, Top 8 and Award Winners for 2013 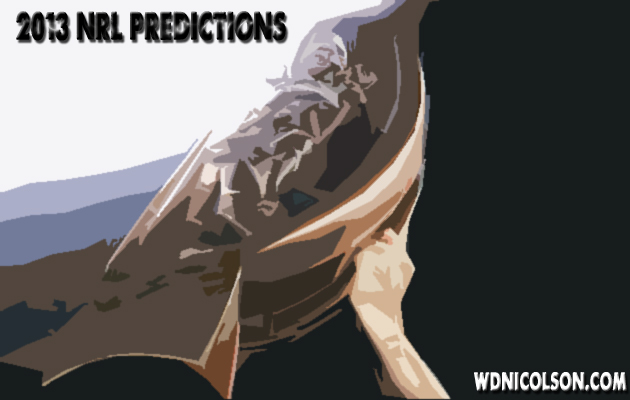 The footy starts tonight with the Roosters v Rabbitohs at the SFS and www.wdnicolson.com is rolling out of final set of predictions for the 2013 NRL Season.

I'm heading down to the SFS for the match and with Sonny Bill Williams set to take part - the 2013 season opener should be a cracker.

You can read up on all our Round 1 Tips here and it features our heavily researched Latest of Late Mail NOW UP. Keep track of game-day Late Mail via #NRLLateMail.

For our analysis of each team for Round 1, with our NRL Dream Team and NRL Super Coach tips for players you need to consider/ignore from each side - click here.

This year didn't start the best off the field, so let's hope the play on the field continues to get better and better.

In particular, make sure you enjoy the opening 4-6 weeks - they are always the most interesting for all 16 sets of fans - because you've got a team to support that's still a chance in September!

Our picks are below. Enjoy the season and thanks for sticking with www.wdnicolson.com for another season.

Let's be honest the Melbourne Storm have 3 of the best players on the planet, one of the best coaches going around and an ability to get the best out of a player... that's a potent combination.
They deserve favouritism to take out back to back titles with the Bunnies' star studded team, the strike power of the Cowboys and the runners up from last year Canterbury their biggest threats.

In the next rung the Raiders, Sharks (hopefully with a full squad), Sea Eagles, Knights, Broncos and Roosters look capable of a Top 8 spot, leaving the Tigers, Titans, Dragons and Warriors a season to prove us wrong by make the playoff charge we're not expecting.

That sees the Panthers and Eels fighting it out for the Wooden Spoon... and it'll take a miracle if either team is a legitimate threat for a playoff spot come August.

Come September, I'm fairly confident in predicting that anyone who beats the Storm in the finals - will win the comp. Of course that might only come in the Grand Final, and pre-Ben Barba's issues - I had the Bulldogs in the Grand Final with Melbourne.
So let's swap the Dogs for the Rabbitohs... and stick with the Storm for back to back premierships.

Individual Awards
As regular readers of www.wdnicolson.com and followers of @NRLTweet know - we run The @NRLTweet Player of the Year Awards each season (starting in 2010) and they return once again for 2013 with another group of excellent Rugby League judges.

The team for 2013 is as follows - with their Round 1 voting allocation.
Round 1 2013 Voting Allocation

Now for our Picks for each Individual Award.
@NRLTweet Player of the Year:
Greg Inglis, Rabbitohs | R/Ups: Cameron Smith, Storm, Josh Reynolds, Bulldogs.
Would have been Ben Barba to repeat as champion, but he could miss as much as half a season, so give us the best big game player in Rugby League ahead of the best overall player and a guy we think might be just as good in 2013 without Barba as he was in 2012 with him.
Rookie of the Year:
Drury Low, Bulldogs or Josh Drinkwater, Dragons | R/Ups: Tohu Harris, Storm, David Klemmer, Bulldogs, Jack Buchanan, Tigers.
If Barba doesn't return soon, then Low could be the real story of the season. The sooner Drinkwater is the Dragons' #7 the sooner he might run away with this. Harris is a raw talent who will get good game time, while Klemmer and Buchanan might struggle for minutes to win this award.
Top Pointscorer:
Adam Reynolds, Rabbitohs
Top Tryscorer:
Nathan Merritt, Rabbitohs | R/Ups: Akuila Uate, Knights, Josh Morris, Bulldogs, Sandor Earl, Raiders.
With Barba out of the running, let's go with the tryscoring machine known as Nathan Merritt.

So there are our predictions - hope you enjoy the game tonight and make sure you give our Season Previews a run for a better look at your team's chances in 2013.