WINNERS and LOSERS
TEAM OF THE WEEK
Here on www.wdnicolson.com during the Semi Finals we will feature the Winners and Losers of each semi final week and the Team of the Week. Feel free to post your thoughts below.

The Sea Eagles will play the Warriors in the 2011 Grand Final!

Check out the Finals Week 3 Findings below...
Listen to the Preliminary Finals Review Podcast with Matt and Warrick.

NOT The Footy Show Episode 87
- Preliminary Finals Review Released September 26, 2011 -
Right Click Save Target As This Link if you don't have iTunes.
Manly will play the Warriors in the Grand Final on October 2nd - but how did they get there? Here is the Preliminary Finals Review Podcast recapping Manly 26 Brisbane 14 and Warriors 20 Melbourne 12.
Join Matthew Duncan and Warrick Nicolson on Episode 87 as they dissect the Preliminary Finals, discuss referees for the Grand Final, the NRL Jokediciary farce involving Williams, Matai and yes Cameron Smith, the way the Warriors and Manly keep playing footy, Shaun Johnson's emergence, Daly Cherry-Evans' brilliance, Brisbane's poor start and just how rattled were Melbourne?
Our Grand Final Show has lined up Wendell Sailor, Kevin Campion and Andy Raymond - with the cast of regulars - and that will be out Wednesday September 28.

Ivan Cleary - Showed up at the Week 1 presser in disbelief... he couldn't believe his team had been so poor against the Broncos. But in the last two weeks he's seen his team hang with the Tigers and get home late, then totally outplay the Storm for the final 40 minutes. He's looking like a genius a fortnight after looking bewildered. Funny game Rugby League.

Des Hasler - From the outside looking in he made some big adjustements to the Manly attacking style over the course of the off-season and the return has been sensational. Manly are one of the best teams to watch play footy now and even typing that makes me feel dirty. But it is undeniable - Manly play a great brand of football.

Steven Matai, Tony Williams and Cameron Smith - All avoided suspension for things that would have been (sorry should have been - it's the Jokediciary after all) scruitinised much more during the regular season. Matai should've faced the panel (but also should have got off), Williams was charged to the point where he wouldn't get suspended and Smith avoided suspension for an elbow that a niff nuff would've got 3 or 4 weeks for. So they are all definitely winners for avoiding any time off.

Shaun Johnson - Yes the try he set up for Lewis Brown was a sight to behold but it was his long kicking game in the second half that won the game for the Warriors. His kicking game pinned Melbourne deep insider their own half time and time again and the defence backed him up. Then he stepped up and bamboozled the Storm to send the Warriors into the Grand Final.

Manly's Recruitment Staff - Daly Cherry-Evans vs Trent Hodkinson. It was a shock to hear that Manly had let Hodkinson walk to the Dogs midway though last year but NOT The Footy Show's spy in Brisbane - Matthew Duncan - assured us that DCE had the goods. And he's been even better than advertised. Manly backed the kid from Queensland and that belief was evident before 2011 even began.
Cherry-Evans told the Sunshine Coast Daily in June, 2010 after he signed a new three year deal that "I’d like to think that I’m next in line (for the Manly halfback spot). If they go elsewhere for anyone else I’ll be disappointed in the club."
They didn't let him down, and he certainly hasn't let them down.

Feleti Mateo, Krisnan Inu and Joe Galuvao - will play their second Grand Final in three seasons... a better record than any other players in the NRL. Mateo and Inu walked away from the Eels for greener pastures (evidently Parramatta didn't try extremely hard to keep them) at the end of 2010 and the Warriors have now taken advantage of their exceptional talent and made a Grand Final. Mateo has been one of the best players in the competition all season long, while Inu's flashes of brilliance have boosted the Warriors in September. Joe Galuvao was considered washed up before he joined Parramatta in 2008 but he's now got a chance to play in his third decider as a player. Now they all get a chance to be on the winning team two years after the heart-break of 2009 - and at least one of them will finish with a title.
LOSERS - FINALS WEEK 3

Melbourne Storm - Missed a chance to make it five Grand Finals in six seasons (2006-2011). Despite their indiscretions the game hadn't seen a run like that since Canberra made four Grand Finals in five seasons from 1987-1991. The Minor Premiership is a nice accomplishment for a team that lost so much talent in the off-season but the fire in their belly to redeem themselves just a year after having two titles stripped, may have been snuffed out in dramatic fashion at the hands of the Warriors. Couldn't find the big play when they needed it - mainly because the Warriors didn't give them half a chance the entire second half. They don't like losing in Melbourne - and this chance at another title was one the club would have thought they would have taken with both hands.

NRL Jokediciary - No one is surprised that Steven Matai and Tony Williams are free to play in the Grand Final. But the decision not to charge Matai in particular makes a mockery of any minor charges the NRL dishes out during the season. People could have accepted a low charge and a subsequent beating of that charge at the judiciary on Tuesday/Wednesday but to not charge him at all was inconsistent. What he actually did wasn't all that terrible but with 12 or so previous charges and plenty of 'nothing' charges on the NRL Jokediciary's hands already in 2011 - he had to at least be seen to be punished. Even if (as he should have been) he beat the charge. Williams was never going to be charged heavily given a low grade charge would see him avoid suspension due to a good record... and Smith well - it sadly looks a lot like - see no evil, hear no evil, because he's a real star of the game. If a niff nuff does that elbow on Kevin Locke (heck if it had been Matai) - there's a serious suspension coming down.

Cooper Cronk - Apart from a couple of decent kicks, an absolute non-factor in the game. The Warriors found a way to minimise his impact and it appears starving the Storm of field position is the key. A great player who had a bad night... and unfortunately for Cronk - neither Cameron Smith or Billy Slater had big enough nights themselves to make up the difference.

Boring Rugby League - Can we take the sign that the Warriors and Manly are in the Grand Final that boring footy might finally be starting to drift away from the game at the NRL level? While both Manly and the Warriors play out their sets for the end result of a kick - they keep playing footy within those sets and this was never more evident than in the Warriors final two sets of the game when their inside-20m sets were all out attack (despite being in the lead) while Melbourne's two previous inside-20m sets were simply 'get to the kick and hope' sets. Bring back Rugby League the way it should be played - Manly probably deserve the most credit as they have truly played attacking footy in almost every game this year.

The NRL Tweet's Team Of The Week - FINALS WEEK 3 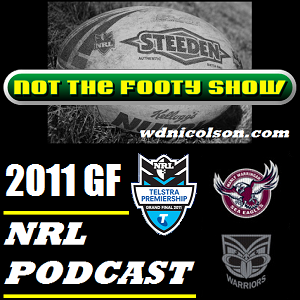 Our Grand Final Podcast will feature Wendell Sailor, Kevin Campion, Andy Raymond and all our regulars - predicting the 2011 Grand Final in a way never seen before.
Not even our Prelim Finals Pitch and Putt Special is as unique as our technique to find the 2011 Premiers!
It will be on iTunes and this website on Wednesday.

Tries: Mitch Rein 17min, Jason Nightingale 23min.
Goals: Jamie Soward 2/4 Attempts.
CROWD: 45,631
GAME STATS
What the result means: Tigers will have a home semi in Week 2 against the Warriors, Dragons avoided elimination when the Warriors were beaten and will play the Broncos in Week 2.
2nd Qualifying Final: Saturday @ Suncorp

Tries: Willie Tonga 27min.
Goals: Johnathan Thurston 2/2 Attempts.
CROWD: 13,972.
GAME STATS
What the result means: Manly will 'host' a Preliminary Final at the SFS or ANZ in Week 3. Cowboys are eliminated as one of the two lowest seeded losers in Week 1.
4th Qualifying Final: Sunday @ AAMI

NOT THE FOOTY SHOW's EXPERT TIPS:
PRELIMINARY FINALS SELECTIONS
All Tipsters need to tip with the start/line in mind. So if a team is +7.5 then if they pick the other team, that side must win by 8 points or more to get the tip correct (if it is +2.0 then the other side must win by 3 points). Starts for each game are based on Thursday's Line - as listed in the matchups at the top of the preview.