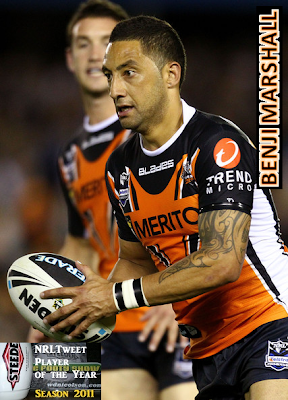 As the National Rugby League enters its Semi Finals Series, it is time for the second annual NRL Tweet Player of the Year Awards.

And we're breaking out our champion a full 24 hours before the Dally M's.

This year - Benji Marshall of the Wests Tigers was the victor - topping 83 Votes after 26 Rounds to finish 20 Votes clear of his nearest rival Cooper Cronk from the Melbourne Storm on 63 and Johnathan Thurston on 61.

You can listen to the Awards Show via Podcast on Tuesday September 6th via iTunes.

NOT The Footy Show Episode 81
- Player of the Year Awards Show Released September 6, 2011 -
Right Click Save Target As This Link if you don't have iTunes.

The Award Categories for 2011 are:

2011 Rookie of the Year - Daly Cherry-Evans.
We have changed the criteria to match that of the Dally M's (no more than 3 NRL games the previous season) to avoid confusion.
Winner: Daly Cherry-Evans, Sea Eagles with 46 Votes.
1st Runner Up: Gareth Widdop, Storm with 32 Votes.
2nd Runner Up: Sam Williams, Raiders; Jack Reed, Broncos; Will Hopoate, Sea Eagles tied with 15 Votes.

2011 Mr Consistency - Billy Slater.
Awarded to the player with the most number of games gaining at least one vote.
Winner: Billy Slater, Storm with 16 Games with Votes.
1st Runner Up: Benji Marshall, Tigers with 15 Games of Votes.
2nd Runner Up: Cameron Smith, Storm and Daly Cherry-Evans with 14 Games of Votes.

2011 NRL Tweet Player of the Year Award
Benji Marshall with 83 Votes.
Awarded to the player with the most Total Votes after 26 Rounds (tiebreakers are Game-Breaker Games, Games with 4+ Votes and then Games with Votes)
Winner: Benji Marshall, Tigers with 83 Votes.
1st Runner Up: Cooper Cronk, Storm with 63 Votes.
2nd Runner Up: Johnathan Thurston, Cowboys with 61 Votes.

This is how the voting finished over the final 9 weeks. Full Season Voting available in the end of season annual. (click to enlarge) 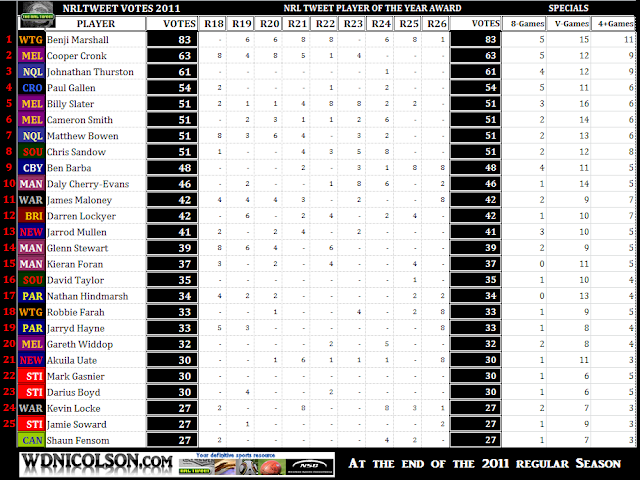 Thanks to all our regular voters for their efforts during the regular season.
They included: Benjamin Hoese, Greg Delaney, Craig Buchanan, Dane Neville, Haylen Southon, Justin Davies, Maria Tsialis, Matthew Duncan, Matt Spillane, Matthew Vickers, Michael McLucas, Nigel Wilbow, Rob Neilsen and Warrick Nicolson.
You can read their Round by Round Voting Summaries for 2011 here and just click on the corresponding Round Results Blog link.

You can find the NRL Finals Week 1 Schedule here. 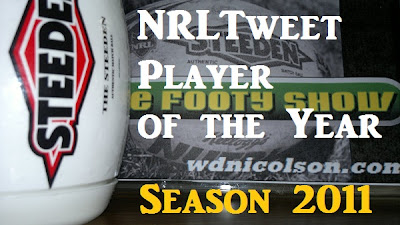 There will be a new winner in 2011, with last year's victor Todd Carney not exactly replicating his performance from 2010 and he will end the season with an uncertain future (again).

The good news is a number of players have backed up their 2010 form to be in contention for the 2011 Award and they are joined by a host of fresh faces in the race for not only the Overall Player of the Year Award but the various categories on offer.

You can watch the NRL Tweet Player of the Year Awards LIVE at 7:30pm on Monday September 5th via ustream player below. The Podcast version will be released Tuesday September 6th on itunes.

NOT The Footy Show Episode 81 - LIVE