St.George-Illawarra are Minor Premiers for the 2nd straight season but this competition is winnable by 7 of the 8 teams that qualified for the Big Dance. That 8th team - Manly-Warringah would be contenders had injuries and suspensions not crushed them in recent weeks.

For More of this Article click the link below...

#5 WARRIORS
On Friday Night September 10 - the 4th Seeded Gold Coast Titans will host the 5th Seeded Warriors at Skilled Park. The Titans secured a home final after beating the Wests Tigers 21-18 on Friday Night. The Warriors defeated the Eels 26-12 on Saturday to move to 5th.
#3 TIGERS

#6 ROOSTERS
On Saturday Night September 11 - the 3rd Seeded Wests Tigers will play the 6th Seeded Sydney Roosters... at the Sydney Football Stadium. For financial reasons the Tigers decided not to play their Home Final at Leichhardt Oval and as a result - the Sydney Roosters will play from their home venue despite finishing 6th after defeating the North Queensland Cowboys 18-8 in Townsville.
#2 PANTHERS

#7 RAIDERS
On Saturday Night September 11 - The 2nd Seeded Penrith Panthers will host the Canberra Raiders in the second Saturday Night game at CUA Stadium on September 11 after crushing the Sharks 50-12 last night. The Canberra Raiders secured their playoff berth with a 18-16 win over the Broncos on Friday Night and they secured 7th spot - when the Bulldogs beat Manly 30-24 at Brookvale Oval.
#1 DRAGONS

#8 SEA EAGLES
On Sunday Afternoon September 12 - And with the St.George-Illawarra Dragons crushing the Rabbitohs 38-24 they will play the Manly-Warringah Sea Eagles on Sunday Afternoon September 12 at WIN Jubilee Stadium. A game that may see the Sea Eagles fielding a host of new players due to injury & suspension issues coming out of the Canterbury game. While the Dragons will recall a host of starting talent.
The NRLTweet's Previews for Week One.
|=| |=| |=| 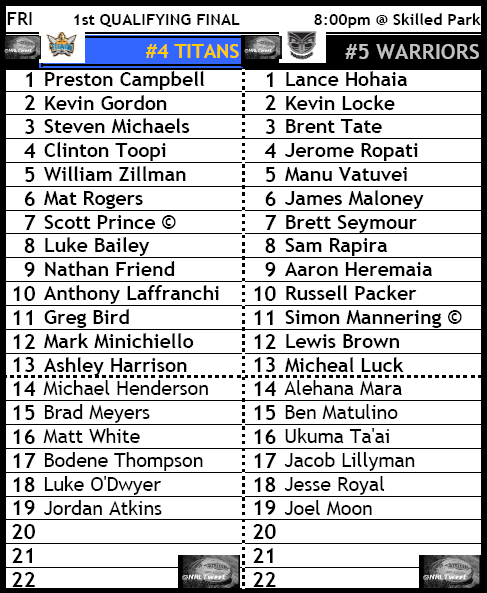 Final Preview 10/9: With Preston Campbell succumbing to a hamstring injury and Scott Prince, Luke Bailey, Brad Meyers & Mat Rogers going to play injured - the Titans' hopes rest on the shoulders of Greg Bird, Anthony Laffranchi & Mark Minichiello. If those three cannot control the edge of the ruck in defence and spot the Warriors' halves Seymour & Maloney when they have the ball - the Warriors will grind the Titans into the ground. One area the Warriors are very good at is their kick-chase game... and with the Titans' best the walking wounded - the Warriors will try to keep the tempo of the game very high. The loser of this game could very well have played their last match of 2010.
First Preview 5/9: The Titans will be sweating on the fitness of Scott Prince (shoulder), Preston Campbell (hamstring) and to a lesser extent Luke Bailey (thumb - not expected back yet) as they play host to the surging Warriors. With a home final at Skilled - the Titans won't be without significant support but the Warriors have been outstanding in the second half of the season and are well and truly capable of causing an upset - even if Prince, Campbell & Bailey play.
Injury Update via SMH 6/9: Prince & Campbell should play but Bailey is joined by Steve Michaels & Brad Meyers as serious doubts. The Warriors should get Micheal Luck back from a leg gash for Jesse Royal, while Ian Henderson is a chance to come in for Alehana Mara.
Team Update 9/9: Campbell is not going to play because of his hamstring injury, Jordan Atkins moves onto the wing with William Zillman going to fullback.
Early Tip 5/9: Going with the Warriors on the road right now... especially with the Gold Coast's injury worries.
Thursday's Tip 9/9: With Preston Campbell now out - get on the Warriors to pull off the upset at Skilled. 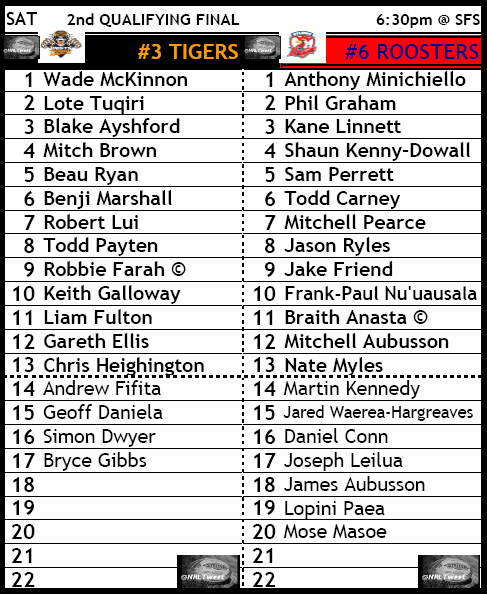 Final Preview 10/9: There's some real pressure on the Roosters to win this game because if they lose - they must endure two games of football as spectators to know if they'll be playing another game in 2010. The Tigers look safe to play again next week with the 3rd seed but it is still possible that if they lost this game they could get knocked out. This is the battle of the best two attacking teams in the competition and the matchup of Benji Marshall & Robbie Farah v Todd Carney & Mitchell Pearce is outstanding. Defensively the Tigers have made massive strides in 2010... whereas the Roosters have yet to find that defensive steel to match their attacking potency. The SFS should have at least 30,000 fans packed in - this will be a cracker.
First Preview 5/9: Without doubt the most anticipated game of the First Week as both teams won't hold back with their attack. But this game will be decided by the team that can stand up defensively to the attacking raids launched. Injury concerns for both teams but the health of Nate Myles will have a gigantic impact on this result.
Injury Update via SMH 6/9: The Tigers will name Liam Fulton & Bryce Gibbs but neither are certainties to play. Wade McKinnon is highly unlikely to play while Geoff Daniela is considered a better chance. Chris Lawrence is out until the Preliminary Final at the earliest and neither Tim Moltzen or Taniela Tuiaki will play in 2010. For the Roosters, Nate Myles is the biggest injury concern with a slight quad strain while Daniel Conn will return from suspension. Jake Friend, Mose Masoe & Anthony Minichiello will be named but assessed later in the week.
Team Update 9/9: McKinnon still remains in extreme doubt - if he does play expect him to come off the bench with Mitch Brown at fullback and Geoff Daniela starting. Minichiello & Myles look like they will play.

Early Tip 5/9: If there's a team that can run with the Tigers it is the Roosters but sticking with the Tigers for now.
Thursday's Tip 9/9: Have committed to picking the Tigers but I get the sneaking suspicion it is mainly because they have been my tip for the comp since the Storm got booted. Stick with them here. 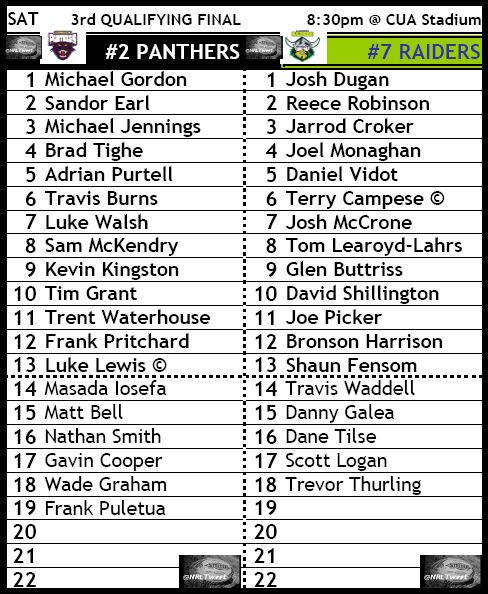 Final Preview 10/9: Two football teams that rely on momentum to win matches collide at CUA on Saturday Night. On the injury front - Penrith won't have Lachlan Coote and both Luke Lewis & Luke Walsh will play not at 100%. The Panthers are also without skipper Petero Civoniceva - a huge loss up front. Canberra enter on a streak of 8 wins from their last 9 games and are missing only Alan Tongue & Joel Thompson from their first choice 17. This game boils down to the 2nd chance factor that has to be in the back of the minds of the banged up Panthers... Canberra don't have that luxury and that is the only thing that splits them here in front of what should be a big crowd at Penrith.
First Preview 5/9: Penrith and Canberra play their game up the middle and given both packs are gigantic - this will be the most physical clash of the First Week. Canberra come into this game with 8 wins from their last 9 games, while the Panthers put together a 3 match winning streak heading into the Finals. Penrith will get Luke Lewis back but will Luke Walsh or Lachlan Coote be alongside him? Because Petero Civoniceva won't be due to suspension. A golden opportunity for the Raiders to spring an upset if they hold the ball.
Injury Update via SMH 6/9: Penrith will get Luke Walsh & Luke Lewis back from injury but Petero Civoniveca is suspended and Lachlan Coote is unlikely to play. Canberra get Trevor Thurling back on the bench, Travis Waddell has a jaw problem but Alan Tongue is long odds to return from a calf injury.
Team Update 9/9: Lewis should play but Coote is next to no chance this week - but medical staff may clear him for the next match. Canberra will not have Alan Tongue.
Early Tip 5/9: Toss a coin here... both sides will fancy their chances and right now - I can't split them.
Thursday's Tip 9/9: With news that Luke Lewis is struggling with his calf injury and Lachlan Coote unlikely to play... add that to no Civoniceva and it's the Raiders by a narrow margin because for them there are no second chances this week. 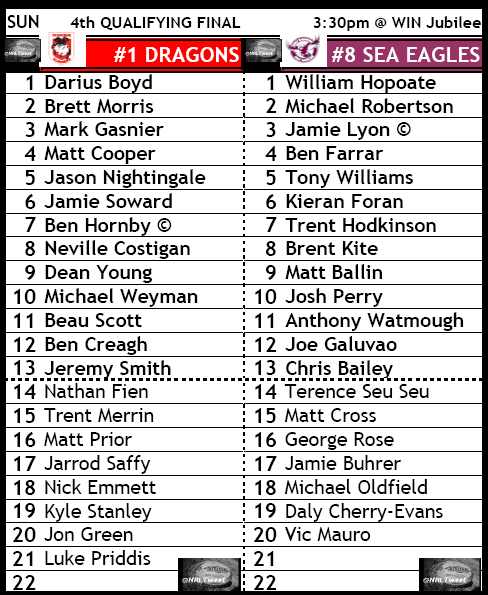 Final Preview 10/9: Given the key players that are out for the Sea Eagles - and the glut of quality ones coming back in for the Dragons - this is a monumental mis-match of a Qualifying Final. After crushing the Rabbitohs' Finals hopes in Round 26 - the Dragons will do the same to Manly's premiership hopes on Sunday afternoon in front of an overflowing WIN Jubilee Stadium. The Dragons simply cannot lose this game if they are fair dinkum Premiership material - and they won't - they'll win by plenty.
First Preview 5/9: The Dragons were far too good for South Sydney on Sunday Night - and like Manly will be this coming Sunday, the Bunnies were playing for their season. St.George-Illawarra will recall up to five regular squad members in Jamie Soward, Ben Hornby, Jeremy Smith, Dean Young & Trent Merrin from their one week rest - further strengthening a team that was irresistible in the 1st half against Souths. Manly have injury & suspension issues coming out of their loss to the Bulldogs and look like no hope of extending their 2010 season longer than the 80 minutes of football this Sunday.

Injury Update via SMH 6/9: St.George-Illawarra will name all 5 players who were rested v Souths. Beau Scott will hear today if he has been charged for his late hit on Chris Sandow. Michael Weyman & Mark Gasnier were both given early marks but no injuries were reported. Manly have Kieran Foran, Anthony Watmough & Brent Kite in doubt with injury, while Jason King, Steven Matai and Chris Bailey are facing judiciary charges for high tackles. King must beat a charge in order to avoid a week's suspension, Bailey will get off with an early plea but Matai faces up to 9 weeks on the sidelines if he challenges his charge and loses. Manly are in deep poop.
Team Update 9/9: Foran is in the most doubt for Manly, while the rest of their doubtful remain just that. Young Daly Cherry-Evans will get a chance if Foran is ruled out. Ben Hornby is the only concern for the Dragons but is likely to play.
Early Tip 5/9: The Dragons look like certainties.
Thursday's Tip 9/9: The Dragons look like even greater certainties. 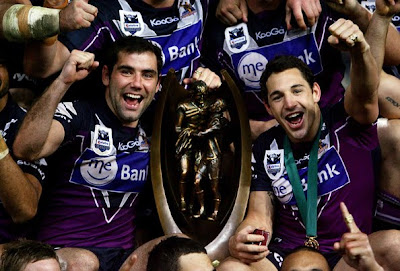