Our full 'race call' will be available in NOT The Footy Show Episode 42 - available Thursday September 16 - on iTunes!

See Below for the Pre-Race Article... including our Dream Elite Eight for the next Gatorade Bolt.

Forget the spirit of competition - let's all race for the sake of promoting an energy drink!
Although the confirmed field has quality from the National Rugby League like Jarryd Hayne from the Eels, Greg Inglis from the Storm err... Broncos & Josh Morris from the Bulldogs; it will not feature the world's fastest man in Usain Bolt - which is a shame because when news first broke of this race - he had committed to running in it.
Olympic Champion Bolt (who the race is named after as part of his affiliation with Gatorade) is currently injured (or is he - he told The Australian that he may yet run tonight - even though it may only be a leg of a celebrity 4x100m relay) which has put a damper on the anticipation for this race, that while a tasty proposition, could have been so much better. Other 'starters' for the celebrity relay are Brad Fittler, Brad Haddin, Jason Taylor, Matt Shirvington, Michael Buettner and Danny Green according to SBS (but they have Kane Johnson from Carlton running in the main race... I think they meant Kade Simpson).
Athletics Australia is doing the right thing putting it on as the marquee race in their Pirtek Athletic All Stars Brought To You By Competitive Edge race meet - but one can't help but wonder if the current field (below) could have been so much better had they re-scheduled it for October or November.

One suggestion I heard today was all runners should have to run the 100 Metres with a footy under their arm... great idea - as long as they have to put the ball down properly at the end of the track to win. Knock on and you're disqualified!

That's the reason Chris Walker was not invited.
|=| The Gatorade Bolt Field - with the final runner now confirmed (By Iain Payten on Twitter): 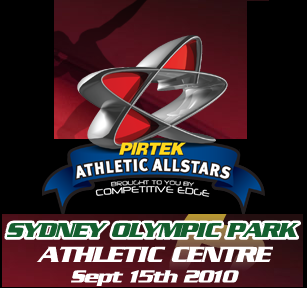 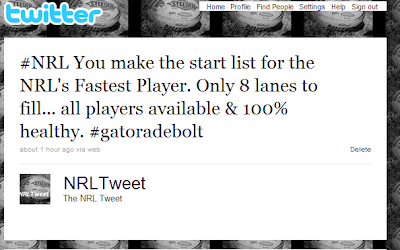 |=| So who would you pick in your Dream Eight Man Field or Elite Eight?
Granted injury will play a part in assembling the best possible field at any time (as will availability if there is still representative Rugby League being played) and despite the quality and speed on that list - it could have been a whole lot better.

For the record this would be my starting eight - and narrowing the field down to eight was near on impossible as there are at least four incredibly fast players who just miss out.
All names are in alphabetical order.

Yes as much as it pains me to do so - that means these guys miss out:
9. Phil Graham, Roosters
10. Greg Inglis, Broncos
11. Michael Jennings, Panthers
12. Brett Morris, Dragons

Other names that have been thrown around are Chris Lawrence (Tigers), Kevin Locke (Warriors), Matthew Bowen (Cowboys) and of course, Luke Covell (Sharks).

Quite honestly the fairest way to establish an Elite Eight would be to have two Semi Finals run earlier in the day and the Final be the last event on the schedule.

If it was a field like that - I would be at Sydney Olympic Park with bells on. But it isn't so I won't be.


|=| Follow the Gatorade Bolt on Twitter using the hashtag #gatoradebolt - the race will be telecast live at 8:30pm Wednesday September 15 on One HD (Channel Ten's HD Sport Channel '1').

Look out for the next episode of NOT The Footy Show (Episode 42) when Dave & I will call the Gatorade Bolt 'live' as it happens... as we're recording the show at the time, the 'live call' will be in the Podcast out on Thursday September 16th.
As for a winner in the Gatorade Bolt to be run tonight?
Absolutely no idea to be honest... because there's a few unknowns in the race.
But pushed to make a call? 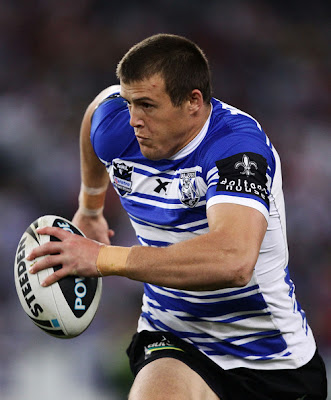 Well...  if I was convinced Parramatta's Jarryd Hayne was 100% fit (he didn't look it in the final few weeks of the NRL season) - he would be my choice, but I'm going with Canterbury's Josh Morris to reel in the field late with his incredibly strong stride.

As I posted on Twitter today... "Can't get Josh Morris reeling in Jennings out of my mind. He might start slowly but he's got incredible closing speed."
By W D Nicolson