GAME HIGHLIGHTS
What This Result Means:

Raiders move into Week Two with the victory and will host a Elimination Final at Canberra Stadium on either Friday against the Tigers (if Dragons beat Manly) or on Saturday against the Dragons (if Manly beat St.George-Illawarra).

Panthers finished 2nd so they were never in danger of being eliminated in Week One. Should the Dragons win as expected - the Panthers will travel to the SFS on Saturday Night September 18 to play the Roosters. If Manly win - the Panthers will play the Sea Eagles next week again at the SFS or Brookvale.
@NRLTweet Game Recap: 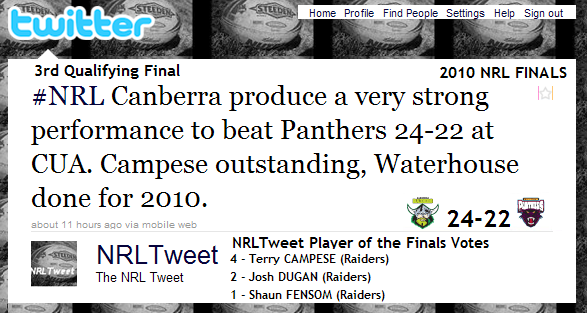 Please Note: The NRL Tweet Player of the Finals Award are provisional - this is the classic Voting System from the Regular Season - to determine the Player of the Finals their Individual Game Rating out of 10 will be heavily factored in.
Full Player Ratings for Raiders v Panthers Here.