2010 NRL Premiership Awards - The NRL Tweet Player of the Year

We have announced the 2010 Player of the Year below... so scroll down for the result.

These are the Three NRL Players who were still in contention for the NRL Tweet Player of the Year Award entering Round 26 of the 2010 Regular Season. 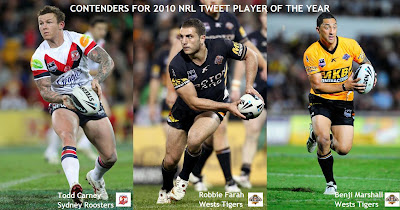 Todd Carney of the Sydney Roosters, Robbie Farah of the Wests Tigers and Benji Marshall of the Wests Tigers can all win the Award.
Voting for Round 26 is complete... the Awards are announced in the NOT The Footy Show Podcast & Video below.
Full List of Winners are below the podcast.

So Why The NRL Tweet Player of the Year?
Since the demise of the Rothmans Medal in 1996 - Rugby League has had but one 'official' Player of the Year Award.
The Dally Ms are considered the pinnacle of recognition in Rugby League by the NRL but sadly for years it was dominated by a section of the media riddled with agendas doing the voting and although the final winner could not often be argued with - the process lacked credibility. It must be pointed out that in 2010 - the Dally M Award has been voted on by past players which is a gigantic improvement on the old system... but with only one voter per game it means that not every player will gain recognition for their efforts.
Unlike The NRL Tweet Player of the Year System... while not perfect it is certainly an improvement on the process of collating votes.

In 2010 - The NRL Tweet and a group of dedicated Rugby League Fans set out to produce the most objective Player of the Year Award possible. Now after 26 Rounds of the 2010 Regular Season - they have delivered on this objective to the best of their ability.

Two voters would watch each game played in the National Rugby League and hand out votes to the best three players on the field. Objectivity was the name of the game - even if a voter had a strong allegiance to one team, they knew that the other voter would hold them accountable for any bias and vice versa.

NRL Tweet Player of the Year Votes were awarded under the following weighting:

This meant that if both sets of voters agreed that Player XYZ was the best - that player would register 8 Player of the Year Votes. The reason for the higher '4' rather than the normal '3' was to recognise that if a player was agreed to be the best by both voters - they deserved a huge bonus for that performance. With two sets of eyes watching each game - it was not uncommon for a different player to gain a single '4' vote from both voters.

The result is an End of Season Table that quite frankly - underscores the value of such a system.

When you break down where a player gained their votes via the table - there is simply no doubt that if a Player had a bearing on the result - they gained valuable votes.

All the winners in the 2010 NRL Tweet Player of the Year Awards will be announced on wdnicolson.blogspot.com, The NRL Tweet, NSCVideos on YouTube & via the NOT The Footy Show Podcast on iTunes at approx 6pm Tuesday September 7th.

James Maloney, Warriors (with 24 Votes)
* Our criteria is any player who played no more than 5 NRL Games either in the season prior or in total before 2010.

2010 NRL Tweet State of Origin Player of the Year:

Darren Lockyer, Queensland
* Readers of wdnicolson.blogspot.com would already know who won this Award from the 2010 Origin Series - but we'll re-announce the winner anyway.

Todd Carney, Sydney Roosters (Polled in 13 Games)
* The Player who polled votes in the most number of games during 2010. Be it any number of votes - the sheer number of times they polled will be tallied up.

Jarryd Hayne, Parramatta Eels (5 Man of the Match Awards)
* The Player who gained the most '8' Votes in 2010 - this meant that both Voters thought this player was the best player on the field.

And finally... the Big One.

Todd Carney, Sydney Roosters.
* The Player who polled the Most Overall Votes after 26 Rounds of the NRL. Note that no representative game voting is included. 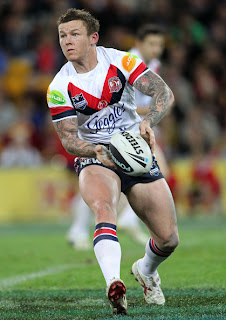 Todd Carney polled 13 times for a total of 63 NRL Tweet Player of the Year Votes.

Robbie Farah with 59 Votes was 2nd

Benji Marshall with 56 Votes was 3rd

Terry Campese with 56 Votes was 4th (on countback)

Jarryd Hayne with 53 Votes was 5th.
A Full Table of All the Vote getters will be available soon.
If you have any suggestions for what we could call each Award - particularly the Mr Consistency & Game Breaker Awards - please leave a comment, send an email or get in touch via The NRL Tweet.
Note: When the Awards are announced - the names of all Voters in the 2010 NRL Tweet Player of the Year process will be listed here. What a great example of co-operation in the Rugby League Community this Award has been. And to Each of you - Thank You for your contribution.
By W D Nicolson